Spot gas prices sold off across most of the country with mild weather seen lingering through early this week. California and Northeast led with double-digit declines, while the NGI Spot Gas National Avg. fell 10 cents to $2.29.

On the futures front, traders continued to eye the possible return of colder air beginning later in the week, and any potential impact it could have on demand and storage inventory rebuilding. The series of storm systems was seen as likely capping losses Thursday after the Energy Information Administration’s much larger-than-expected 23 Bcf injection, the first of the season.

After trending colder with the weather pattern much of last week, overnight weather models on Thursday took a step in the warmer direction, increasing the Pacific flow courtesy of the background El Nino-Southern Oscillation state, while trending a little weaker overall with the amount of blocking in the medium range forecast, according to Bespoke Weather Services.

“We still have slightly above-normal demand” once the current warm spell dissipates, “but with a weaker-than-normal cold air source available up in Canada and more storm variability in play, the upcoming blocking pattern has not been able to push the pattern any further to the cold side,” Bespoke chief meteorologist Brian Lovern said.

The best chance for below-normal temperatures in the upcoming pattern remains from the Midwest to the Rockies, with some lingering upper-level ridging holding rather firm in the Southeast, “which limits the amount of chill that can seep into areas from the Gulf Coast up along the eastern seaboard,” Lovern said.

Friday midday guidance from American weather models reflected slightly cooler trends across the northern United States from Thursday (April 11) to April 16, but then was little changed before and after, according to NatGasWeather. The third week out was looking rather seasonal/neutral for this time of the year, “but with the potential to trend cooler in time across the northern United States.”

While most analysts see further downside risk ahead, Societe Generale had a more bullish outlook. The firm’s analyst team sees the recent market retracement as being tied to some natural softening of sentiment that comes with the seasonal shift, expectations of the first storage injection (reported Thursday), and the recent strengthening of the production trend.

“While those factors do provide some reason to awaken the bears, we remain focused on the current storage situation — second lowest end-winter level in history and a roughly 3.7 Tcf end-October trajectory,” Societe Generale natural gas analyst Breanne Dougherty said.

At under $3, the firm’s price outlook is not particularly bullish, but it highlights that an end-October storage finish of under 3.8 Tcf is more bullish than bearish for winter 2019-2020, given the slowing gas production and growing liquefied natural gas (LNG) export trends at play through 2020. “We think the market could be underestimating this, which could create the right fundamental picture for a revisit of upside price volatility in winter 2019-2020.”

In the near term, a gas price decline is necessary to stimulate sufficient coal-to-gas switching activity to rebalance the market, according to Raymond James analysts. Longer term, with associated gas production remaining robust, the market needs only modest supply growth from Appalachia (and likely declines in most other gas plays) to balance.

“We expect 2019 should prove to be a positive year for natural gas demand as both exports to Mexico and outbound LNG tanker activity ramp up. On the supply side, more associated gas supply is expected. However, we believe an increasing domestic gas supply and growth in renewables that are increasingly becoming more cost competitive with gas are putting further pressure on Henry Hub gas prices,” analysts said.

Spot gas prices were lower Friday as exceptionally light demand was seen lingering over the next several days ahead of the next series of cold snaps. Losses were more substantial than they had been in recent days and especially so in the Northeast.

Algonquin Gas Transmission (AGT) was planning a series of maintenance events that could cut mainline capacity through mid-June. There is to be a combination of pig runs on its 26-inch mainline between the Southeast and Cromwell compressor stations (CS) and outages on the Southeast CS itself.

Southeast CS operating capacity of 1,760 MMcf/d was scheduled to drop to 1,297 MMcf/d and 1,197 MMcf/d on April 7 and 10, respectively. Furthermore, capacity through Southeast would be reduced slightly to 1,695 until June 14.

“Flows through Southeast have averaged 1,463 MMcf/d and maxed at 1,645 MMcf/d over the last two weeks, meaning up to 448 MMcf/d of scheduled flows will be impacted,” Genscape Inc. natural gas analyst Josh Garcia said.

Additionally, AGT was to conduct pig runs from the Burrillville CS to the end of the line, with station capacity reduced to 735 MMcf/d on Tuesday (April 9) and to 604 MMcf/d on April 16, potentially impacting as much as 144 MMcf/d of flows.

“The usual forms of alternative supply of downstream interconnects and LNG will be relevant if high demand materializes. However, temperatures are currently forecasted to be warmer than normal, which will mitigate the impact of these events,” Garcia said.

In Appalachia, Texas Eastern M-3, Delivery spot gas was down a quarter to $2.315, while pricing hubs further down in the Southeast fell less than a dime.

ANR Pipeline declared a force majeure in its Southeast Southern Segment, restricting flows at the Cottage Grove Southbound CS in Tennessee for gas days Friday (April 5) through April 14, which could cut up to 129 MMcf/d. The restrictions are needed to perform unexpected pipeline repairs north of its Celestine CS in Indiana.

“As of the evening cycle for gas day April 5, we are already seeing a day/day drop in scheduled capacity of 123 MMcf/d,” Genscape analyst Anthony Ferrara said.

Prices across Louisiana were down no more than a nickel or so, while a dehydration unit at Enterprise Products Partners LP’s (EPD) gas gathering facility in DeSoto Parish, LA, remained offline following an explosion and fire late Wednesday. There was no impact beyond EPD’s fence line, and the fire burned itself out pretty quickly, spokesman Rick Rainey told NGI. An investigation is ongoing, and there was no word on when the unit would return to service, although the outage was not expected to be prolonged.

Midcontinent spot gas dropped as much as 16 cents. At Enable East, cash slipped only 2.5 cents to $2.435 as Enable was set to conduct integrity repairs to the AC Line running from the Chandler CS in Latimer County, OK, to the Malvern CS in Hot Spring County, AK. These repairs, expected to take place from Monday through Saturday (April 8-13), require the capacity at Chandler CS to be reduced to 500 MMcf/d.

Simultaneously, pigging runs were to be conducted on the AD line (mainline) as the AC Line anomalies are resolved. The Chandler CS is currently undergoing a planned maintenance to maintain the engines at the station which has limited capacity to 796 MMcf/d since April 2.

Furthermore, the system has experienced multiple on/off forces majeure at the Byars Lake CS upstream from Chandler in the past two weeks. “These new integrity repairs, however, will have a much more significant effect on gas flows through Chandler, which have averaged 889 MMcf/d over the past 30 days. Flows have hovered around the 1 Bcf/d mark consistently almost two weeks ago before maintenance began impacting the system,” Genscape analyst Dominic Eggerman said.

Overall, gas flows through Chandler would be cut by 389 MMcf/d until Saturday (April 13), when operational capacity will return to the previously limited 796 MMcf/d.

In West Texas, spot gas followed the rest of the country lower, but losses were limited to less than 20 cents and outright prices were far short of the records seen a few days earlier.

California’s SoCal Citygate spot gas prices plunged nearly 50 cents to average $3.355, although other pricing hubs in the state were down no more than 15 cents. 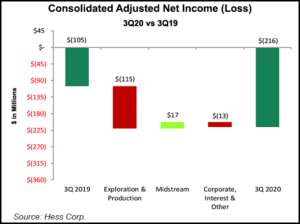