It was another down week for natural gas forward prices across the United States, but some markets fell substantially more than others as production continues to overwhelm the market. 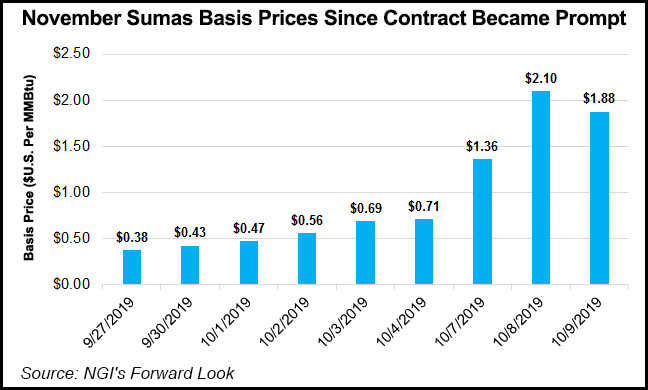 Meanwhile, pipeline and storage restrictions in one of the only strong demand markets in recent days boosted prices there. Overall, November forward prices fell an average 8 cents from Oct. 3-9, and December dropped a nickel, according to NGI’s Forward Look.

With Nymex futures leading the way, forward prices plunged by the double-digits across most regions — and as much as 58 cents in New England — as a lack of sustained cold and near-record production continue to dominate the market. There have been bouts of strong demand due to chilly temperatures, but those cold snaps have been fleeting, and current outlooks show more of the same for the foreseeable future.

Weather data overnight Wednesday had more support for a warmer eastern half of the United States in the 11- to 15-day period, which could grow even stronger based on the look of the upper air pattern, according to Bespoke Weather Services. Agreement in the modeling was generally better as well, although the American ensemble data remains a little colder overall versus the European dataset.

Nevertheless, Bespoke keeps confidence “slightly below average one more day just in case the recurving typhoon still throws some curveballs at the model output.” The firm noted that the end of both ensembles shows some chance for another window of colder variability, with the American model toward the Midwest again and the European toward the Northeast.

“We cannot rule that out, but still think that warmer periods will outweigh any colder ones for the balance of October and into early November,” Bespoke said.

Regardless of demand prospects for early winter, production continues to fire on all cylinders, boosting market confidence that output can easily keep pace. Genscape Inc. estimates that on Wednesday, Lower 48 production returned above the 92 Bcf/d mark for the first time in nine days.

“The estimate was revised up by nearly 1.7 Bcf/d upon incorporation of late-cycle nomination data,” Genscape senior natural gas analyst Rick Margolin said. “Revisions of this magnitude are common during shoulder seasons and, thus, require caution when dealing with top-day estimates.”

The largest revisions (by far) this fall have been taking place in the East, followed by the Rockies and Gulf Coast areas, according to Genscape. With Wednesday’s output estimated at 92.49 Bcf/d, month-to-date production now appears to be averaging 91.57 Bcf/d, which is less than 0.1 Bcf/d below the firm’s forecast.

Robust production has been at the forefront of a rapid refilling of storage inventories that sat more than 700 Bcf below historical levels this past spring. As RBN Energy analyst Sheetal Nasta pointed out in a recent blog, there have been no fewer than nine triple-digit (100 Bcf or greater) injections reported by the Energy Information Administration (EIA) since April, compared with just one each in the past two years and zero in 2016.

“The only other time this decade that there were that many triple-digit injections during the April-October period was in 2014.”

On Thursday, the EIA reported a 98 Bcf injection into inventories, which compared with last year’s 91 Bcf build and the five-year average injection of 89 Bcf.

Ahead of the report, a Wall Street Journal poll of 13 participants pointed to a median build of 94 Bcf, and a Bloomberg survey of 14 analysts had a 99 Bcf median. NGI projected a 94 Bcf injection.

“This is probably the most straightforward, no surprise report we’ve had in a while,” said Enelyst managing director Het Shah.

Genscape, which correctly called the 98 Bcf storage injection, said the figure is about 5 Bcf/d looser than the five-year average.

Broken down by region, the Midwest added 36 Bcf into storage stocks, while 28 Bcf was injected into East facilities, according to EIA. South Central inventories rose by 25 Bcf, including 16 Bcf into nonsalt facilities and 9 Bcf into salts.

Shah noted that salt inventories continue to sit below the five-year average of 278 Bcf, “but overall, South Central storage levels look quite healthy going into the winter.”

Total working gas in storage rose to 3,415 Bcf, which puts inventories at a 472 Bcf surplus over last year and just 9 Bcf below the five-year average, according to EIA.

The rapid refill of storage inventories came amid “epic heat” that enveloped much of the United States from July through September, not to mention multi-year price lows, Bespoke chief meteorologist Brian Lovern said. “And yet end-of-season estimates have risen 150-200 Bcf since late June despite all of that.”

Shah agreed that many factors shook the market this summer, but “production took the prize.”

“The case is being made by market bears that triple-digit builds will extend through late October,” Houston-based Mobius said. “Any crack in this theory will likely bring a bid back to the market.”

Now that the market is in the throes of the shoulder season, producing regions appear to be pricing themselves to incentivize buyers.

After a short-lived rally following the full in-service of Kinder Morgan Inc.’s Gulf Coast Express, forward prices have resumed their downward trajectory as pockets of demand are few and far between. Waha November prices fell 14 cents from Oct. 3-Oct. 9 to reach just 96.4 cents, according to Forward Look. December fared better as it dropped 7 cents to $1.434, while the winter slid 8 cents to $1.26.

With Gulf Coast Express expected to fill quickly, and production again seen overwhelming the market ahead of the next Permian Basin gas takeaway project coming online, Waha summer prices averaged just 74 cents as of Wednesday, after slipping 3 cents on the week.

Forward gas prices in the Midcontinent also posted solid decreases across the front of the curve. NGPL Midcontinent November tumbled 21 cents from Oct. 3-9 to reach $1.496, December fell 12 cents to $1.903 and the winter strip dropped 13 cents to $1.93, Forward Look data show. Next summer was down 4 cents to $1.78.

The softer prices were common across the country, but gas import restrictions across the border in Canada made for a volatile week for a key location in the Rockies.

The stark gains have occurred as cash prices have responded to strong demand due to early-season cold in the region, lower imports and the inability to tap into storage. Northwest Sumas cash prices averaged close to $5 on Wednesday but the hub traded well over $6, boosting basis to $2.71, “the highest level since the tail end of the multi-week rally in February and March that saw an unprecedented single-day average of $158/MMBtu at Sumas,” according to Genscape analyst Joseph Bernardi.

Normally, Northwest Pipeline (NWPL) would increase its storage withdrawals to help manage increased demand, but the Jackson Prairie storage facility in Washington is in the midst of a planned three-week shutdown, which began on Oct. 1. Inventory changes have dropped essentially to zero since Oct.1 after posting an average withdrawal of 147 MMcf/d on days with net withdrawals in September, Genscape said.

Imports to the Pacific Northwest have also been disrupted with supply availability tighter both from British Columbia (BC) and from the Rockies. Deliveries from Westcoast Transmission to serve demand in southern BC have been steadily increasing over the last several weeks even as Westcoast’s total southbound flow capacity has dipped, according to Genscape. That has resulted in lower imports at Sumas.

Maintenance on NWPL at the Rangely Compressor is also cutting imports from the Rockies to the region by about 75 MMcf/d, although this work is expected to end Saturday. Westcoast expects its southbound flow capacity toward Sumas to remain essentially the same for the rest of the month, and the Jackson Prairie shutdown is to remain in place for almost two more weeks.