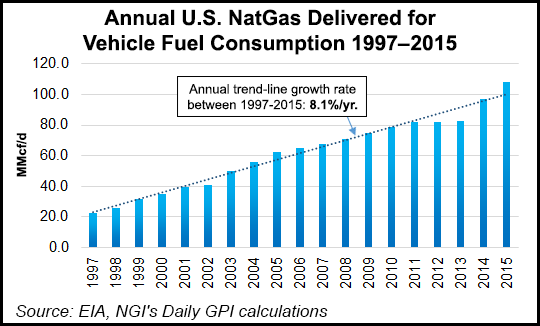 Emissions from the engines are 90% lower than current U.S. Environmental Protection Agency (EPA) and California Air Resources Board (CARB) standards. They are certified to California’s optional standard of 0.02 grams of nitrogen oxide/brake hp/hour.

California Energy Commission staff has designated the NZ natural gas engines as “commercially available” in a draft 2017-18 investment plan update, stating that with the use of biomethane or renewable natural gas fuels the advanced NGV engines can “reduce the lifecycle emissions of medium- and heavy-duty vehicles to levels near or equal to those of zero emission electric vehicles [see Daily GPI, May 6].”

At the North Carolina engine manufacturing plant, the ISL G NZ is available as a first-fit engine with transit, shuttle, school bus, refuse truck and truck original equipment manufacturers, or it can be an engine replacement (repower) for existing ISL G vehicles, Cummins Westport said.

Reliability and operating improvements have been made on the base ISL G engine while keeping the NZ version “at the forefront of cost-effective and dependable emission reduction strategies in transit, medium-duty truck and refuse applications,” said Cummins Westport President Rob Neitzke.

Neitzke called the new engines “a game-changing solution for the reduction of urban tailpipe and engine-related emissions.”

At this point, the state plan does not include the NZ NGVs, setting a goal of 1.5 million hydrogen, fuel cell and fully battery electric vehicles (EV) by 2025. California’s plan is focused on medium- and heavy-duty vehicles, as well as ZEV technologies in public transit and freight transport, Brown said.

Clean Energy designed, built and will operate the LNG station along 20th Street, East, in Fife. The station will have two LNG fast-fill pumps and will be open 24/7 to the general public and fleets. Tacoma-based Interstate Distributor Co. will use the facility for its LNG tractor-trailers that operate in the Northwest.

Interstate Distributor was the first national freight carrier in the Pacific Northwest to switch to natural gas for its fleet operations, so CEO Marc Rogers said he was glad to see another NGV fueling station in the region. “We made the transition to natural gas early so we would be ahead of the game, and now the infrastructure is here.”