New well permitting activity in Texas is but a shadow of what it was one year ago, according to Railroad Commission of Texas (RRC) data. Rig counts and well completions are down, too. But production is holding on, despite the collapse in commodity prices. 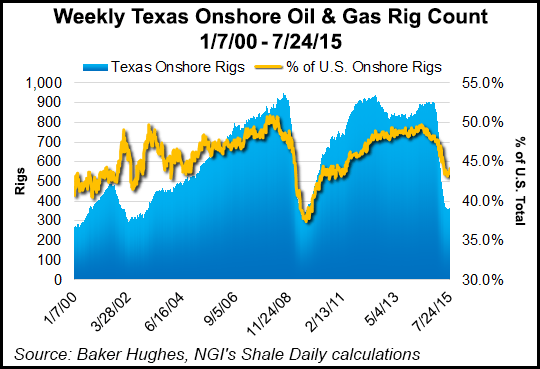 “This scenario wasn’t even thought to be possible 10 years ago,” an industry economist said in Houston this week, projecting that the Lone Star state is on track to set a new crude production record of 1.284 billion bbl (see Shale Daily, July 28).

“The decline in the rig count and the number of drilling permits issued, and indeed in the number of wells drilled, has yet to translate into a decline in Texas crude oil production, and in fact, the rate of growth has yet to indicate a significant slowdown,” said economist Karr Ingham, who maintains the industry barometer Texas Petro Index (TPI) for the Texas Alliance of Energy Producers.

The average Texas rig count as of July 17 was 366, representing about 44% of all active land rigs in the United States, according to Baker Hughes Inc. Before the price collapse, it was typical for Texas to account for about 50% of active drilling rigs.

According to RRC data released Tuesday, preliminary May crude oil production averaged 2.43 million b/d, up from the preliminary 2.14 million b/d average of May 2014. And in May Texas oil and gas wells produced 639.10 Bcf of gas based upon preliminary figures, up from the May 2014 preliminary total of 617.99 Bcf. RRC production numbers are adjusted upward in the weeks and months following their release as more producers report data.

At least until the Texas data has time to catch up, Ingham said figures from the U.S. Energy Information Administration (EIA) are closer to actual activity. According to EIA data released at the end of last month for April, Texas natural gas production was 24.26 Bcf/d, up 4.2% from 23.27 Bcf/d posted in the year-ago period. Meanwhile, U.S. natural gas production was 91.54 Bcf/d in April, up 6.6% compared with 85.88 Bcf/d in April 2014 (see Daily GPI, June 30).

“For most of the last five years, less than 10% of rigs at work in Texas were drilling primarily for natural gas, and yet Texas natural gas production has continued to increase over that period of time,” Ingham said.