Upending the natural gas day will not solve the regional problems of lack of pipeline capacity and, in fact, will undermine the reliability of deliveries, the Natural Gas Supply Association (NGSA) said, responding to FERC’s proposed changes in gas scheduling aimed at serving electric power load (see Daily GPI, March 20). 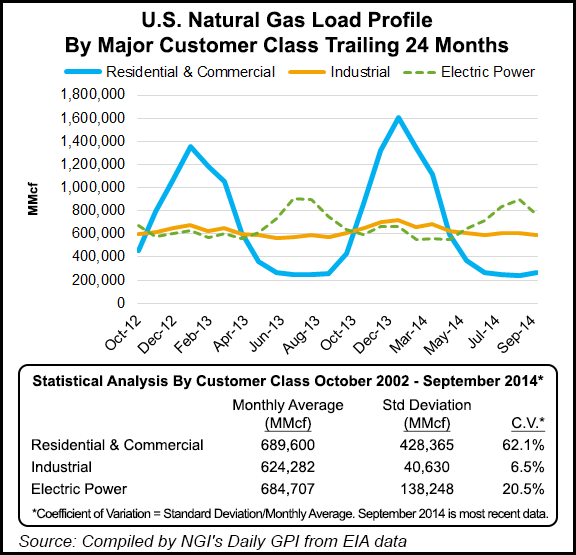 “A 4 a.m. CT Gas Day does not address the root cause of the problems associated with a generator’s inability or unwillingness to obtain and nominate pipeline capacity at levels that sufficiently cover their daily requirements,” NGSA said in comments filed late last week.

The increased use of natural gas for power generation and the failure of incentives for infrastructure to keep up with the increased demand is a problem that moving the start of the gas day from the current 9 a.m. CT won’t fix, the producer group said in filed comments. The group also said it supports three intraday nomination cycles. The notice of proposed rulemaking [RM14-2] issued by the Federal Energy Regulatory Commission (FERC) proposes a 4 a.m. start to the gas day and changing from two to four standard intraday nomination cycles.

Power generators and grid operators say a 4 a.m. start time is necessary to address a concern that they will burn through their nominated gas before the start of the next gas day or that they need the early start to extend their opportunities to balance their load. But burning through their nominated gas can only result in taking more than their scheduled quantity, thereby putting their own schedule and that of others out of balance. These results, mainly due to a constrained system, “will occur regardless of when the gas day begins,” NGSA said.

“We urge the Commission to ensure that organized power market operators promptly establish rules and pricing structures that allow generators to fully recover all of their costs and to contract for a portfolio of services that ensures electric reliability.” The crux of the problem is the way the power market cost/price structure is set up, which blocks market signals from incentivizing either current or new firm capacity.

Changing the gas day would be “just a band-aid,” while contracting for firm capacity, a practice that will lead to construction of more capacity, will address the problem long term, NGSA said.

“RTOs [regional transmission organizations] and generators have yet to provide specific data to show a causal link between the start of the Gas Day and problems experienced by the generators, nor have they explored other means of correcting their issues.” The producer group asked FERC for details as to how many and which generators or grid operators requested the earlier start.

The NGSA comments followed those filed by the Independent System Operators/Regional Transmission Organizations Council (IRC). Electric generators support shifting the start of the gas day to 4 a.m. because it “would allow generators to nominate gas to the day-ahead Timely Nomination Cycle, i.e., the most liquid cycle, to cover the morning electric ramp and the evening peak of a single electric day,” according to the IRC filing (see Daily GPI, Nov. 26).

The producers said they support the intraday changes to the nomination schedule proposed by the North American Energy Standards Board (NAESB), which provides for three intraday cycles, as opposed the the four proposed by FERC. The NAESB proposal “provides additional opportunities for a generator to adjust its nominations, including an additional late-day intraday cycle with nominations due at 7 p.m. CT with a 10 p.m. CT flow, an extended timeframe to submit their nominations in the Timely Cycle, as well as an additional opportunity to bump interruptible customers,” NGSA said.

The NAESB recommendations were accomplished in task force meetings that included approximately 100 operations personnel attending in person and more than 200 participating by phone and webcast. They pointed out that pipelines do not have a full staff in place until about 7 a.m., at which point any problems can be worked out before the 9 a.m. start-up. It would be difficult and expensive to have a full staff in place around the clock. And particularly, during the non-daylight hours, it may not be possible for field personnel to address outside delivery problems.

NAESB’s proposal addresses the issues arising from an overly compressed nomination schedule, such as nominations and scheduling occurring simultaneously, NGSA said, pointing out that natural gas schedulers require a minimum of one and a half hours between cycles to adequately address issues that arise. Four cycles are not operationally manageable, NAESB concluded. Too tight a schedule increases the opportunities for error.

There was a consensus of industry participants that having four intraday cycles is not operationally manageable, with the possibility of chaotic scheduling situations threatening reliability. “Three intraday cycles can be more reliably accommodated while still achieving FERC’s objective to provide all shippers added flexibility with the addition of a third intraday cycle later in the day.”

The producers also stressed the importance of maintaining a reliable interruptible transportation (IT) market, supporting NAESB’s proposal to maintain the IT no-bump rule in the last cycle, which “provides market certainty for gas and power industry participants.”

NGSA also agreed that the Southwest faces problems of a regional nature, which would best be addressed by solutions developed by regional electric/gas market cooperation.