Producers and distributors last week indicated they generallybacked the thrust of FERC’s proposed rule to expand the blanketconstruction and abandonment certificate authority for pipelinesunder the Commission’s Part 157 regulations, but they – like thepipelines – saw some major problem areas with it.

The Natural Gas Supply Association (NGSA) said it was opposed toa provision in the notice of proposed rulemaking (NOPR) that wouldexpand the scope of pipelines’ construction authority to includecertain replacement projects that could, in the end through the useof larger diameter pipe, increase mainline capacity. To guardagainst this, the producer group believes replacement projects thatmay ultimately increase capacity should be subject to 45-day priornotice requirement.

This “would allow parties to protest the unnecessary replacementof facilities which are not being undertaken for ‘sound engineeringreasons,’ but solely to increase capacity. If no protests are filedwithin the 45-day prior notice period, then the pipeline would havethe authority to proceed with the replacement of the facility, eventhough it would increase pipeline capacity,” NGSA told FERC.

Some of the changes proposed to the Part 157 rules could lead toa “piecemeal expansion of pipeline system under the guise offacility replacement,” the producers warned. For this reason, itsaid it couldn’t support an “unspecified expansion” of pipelines’certificate authority.

Likewise, the American Gas Association (AGA) called on FERC toset “limitations” on using blanket certificate authority formainline replacements. “Unless the regulations are amended toinclude such limitations, they will not achieve the Commission’spurpose because they will allow construction of facilities thatsubstantially increase mainline capacity and result in bypass,” thedistributor group noted.

Specifically, the AGA said the Commission should revise its Part157 rules such that they would allow the replacement of obsolete ordeteriorated pipe that “is not intended for the purpose of creatingadditional mainline capacity.” Further, a pipeline applicant must”certify” that any increase in capacity caused by replacementacitivites “will not be used to bypass any customer of the pipelineor negatively impact current customers.”

The NGSA’s and AGA’s comments were in response to theconstruction NOPR issued in September that would give pipelinesexpanded authority to initiate at their own risk and expense”routine” projects that now are being treated as major Section 7(c) applications (subject to a lengthy certification procedures).The proposed rule would extend the scope of blanket authority toinclude meter stations, certain replacement projects andmodifications to compressor engines that don’t increase capacity.

In addition to its concerns with replacement projects, the NGSAtook issue with a provision that would require a pipeline to getwritten permission from “all of the existing customers” on the linebefore it can proceed with abandonment. “This language might beinterpreted to exclude upstream gas producers, gatherers and pointoperators attached to receipt points slated for abandonment, whothemselves hold no interruptible or firm transportation agreementswith the pipeline,” the producer group said.

It urged the Commission to be “more specific and more inclusive”in its proposal such that approval of all the parties would berequired to carry out an abandonment. Further, NGSA believes thatabandonment should also be subject to a 45-day prior noticerequirement.

AGA took this opportunity to call on FERC to provide a more”broad definition” of LDC bypass. The Commission “should definebypass to include situations where the pipeline proposes to serve acustomer within the LDC’s service territory, even if the LDCpreviously has not served that customer.”

NGSA and the American Public Gas Association (APGA), whichrepresents municipal gas systems, both objected to a provision thatwould allow FERC’s director of Office of Pipeline Regulation todismiss protests that fail to raise a “substantitive” issue and/orprovide any specific reason for the the objection. APGA said theterm “substantive” was “too vague” and would give the director”excessive discretion.”

&COPY;Copyright 1998 Intelligence Press Inc. All rights reserved. Thepreceding news report may not be republished or redistributed, inwhole or in part, in any form, without prior written consent ofIntelligence Press, Inc. 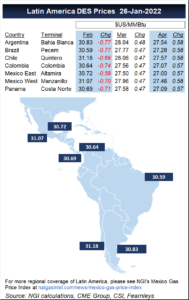