In Montana in a “forgotten corner of the Williston Basin,” a Texas company is gathering up acreage with the expectation that it can turn what some call the False Bakken into a true gem. And if that doesn’t work, northeast Montana has more to offer in and near the Bakken Petroleum System. 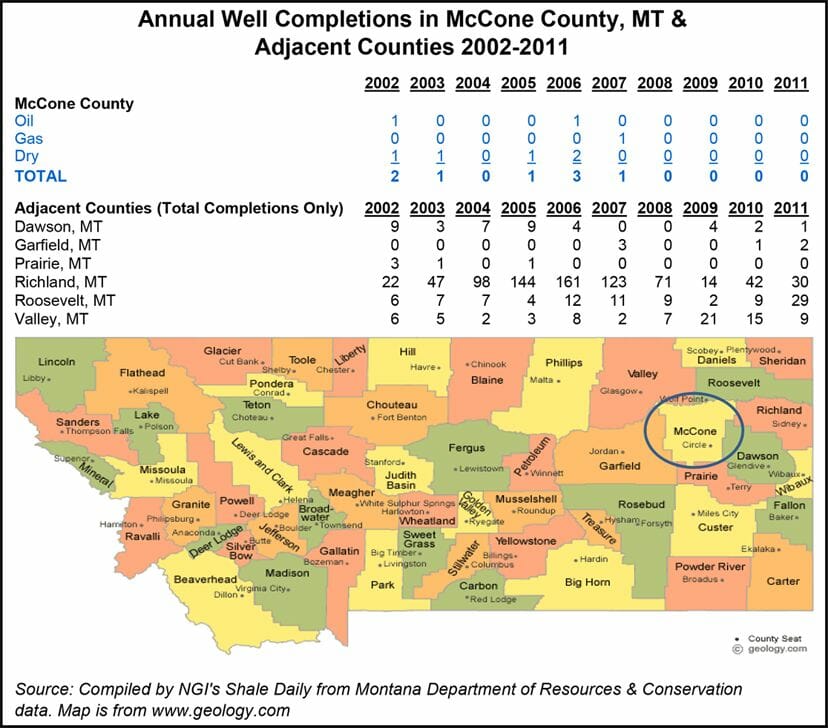 Shale Exploration President Sam Tallis told NGI’s Shale Daily the company has 140,000-150,000 acres in the region, where it hopes to grow its holdings to 300,000-350,000 acres by spring and begin drilling, most likely with a partner versed in horizontal drilling and hydraulic fracturing.

“We’re going after what they call the False Bakken, but we also like the other formations that we believe are in there,” Tallis said. “In addition to the Upper Bakken, we like the Mission Canyon, the Tyler, the Red River formations, which are prolific. It’s the multiple formations that we like. If our geological premise on one level is not there, we’ve got opportunities in three or four more.

“We consider this area to be a largely forgotten corner of the Williston Basin, and we’re looking forward to exploring its potential with modern techniques and technologies. There’s a lot of very gifted geologists and people in the industry — kind of old school, for lack of a better phrase — that have been in the basin for a long time, and they point to this area. For some reason, it’s been kind of forgotten.”

The False Bakken is part of the Lower Lodgepole formation of the Bakken Petroleum System. Recent activity in the Bakken has targeted the Middle Bakken and the Sanish/Three Forks. The source rocks for the Middle Bakken are the Upper Bakken and the Lower Bakken. The Lower Bakken is also the source rock for the Sanish Three Forks.

The Lodgepole Formation overlies the Bakken. According to research published by geologist Roy Neset Jr. in 2009, there’s oil in the Lower Lodgepole. “There is a significant amount of data that would suggest that the lower 110 feet of the Lodgepole Formation in the study area covered may be an economically viable oil-bearing horizon,” he wrote.

Tallis said he’s been in talks with a couple of companies that could become joint venture partners in the play. If Shale Exploration were to go after other formations, such as the Mission Canyon, which is above the Lodgepole, the company probably could handle the task by itself, Tallis said. But drilling for the Bakken or False Bakken will require expertise it doesn’t have.

“That equipment is not only meticulous to operate, it’s also very hard to get,” Tallis said. “To have somebody [for a partner] that has the resources, that has capacity would be great. That means we could drill more wells…We may undertake some stuff ourselves, but at this time, I’m leaning toward bringing in a partner.”

Tallis said the company’s phone started ringing in earnest right after the BLM lease sale in October. “We got multiple calls right after the auction and some word that we beat people out,” Tallis said. “Evidently, there were a lot of people eyeing this [acreage], and our bid was a little higher than theirs, apparently.”

Taking the time to find the right partner is all the more important in light of how long Shale Exploration has been studying the play on its own. “This is something that we’ve put over three and a half years of work into and started basically gathering data six or seven years ago….The BLM [acreage] was basically the anchor,” Tallis said. “Once we had that, then we knew we had a good enough position to invest in the private landowner leaseholds.”

The company has 10 landmen on the ground, running titles and figuring out ownership. Shale Exploration has approached a couple of landowners, Tallis said, adding that from the company’s previous activities in Daniels, Sheridan and Roosevelt counties in Montana “we’ve made some good relationships.

“It’s unbelievable how if you broke it down, there’s not a whole lot of families in northeast Montana. Everyone is almost related or knows each other.” Tallis declined to say what acreage in the area is going for, only that it’s less costly than the leases acquired from the BLM.

While scouting northeast Montana acreage, Shale Exploration is liquidating its Texas assets in the Fort Worth Basin and the Eagle Ford Shale “to basically concentrate on this project because that’s how important it is to us,” Tallis said. “To do it right, it’s going to take the whole team concentrating on it.”

Shale Exploration will keep its New Mexico and Louisiana assets, Tallis said, but northeast Montana will be “what we hang our hat on.

“So many people have had their eyes on North Dakota and the mainstream counties in Montana, and they might have just missed something that may be far better than we expected.”