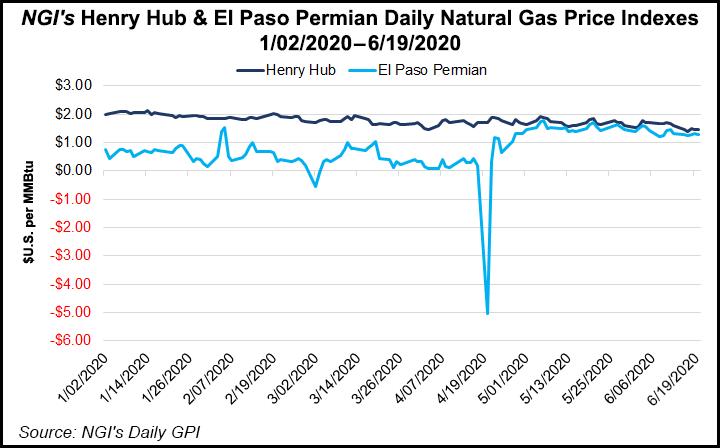 The producers would have to sell to Cheniere all the contracted volumes at global LNG prices minus the cost of liquefaction and other associated costs. Since Cheniere would then sell the LNG at global prices, the producers would effectively pay the liquefaction fees on a take-or-pay basis in exchange for potentially realizing higher profits than from selling the gas into the domestic market.

In today’s low-priced LNG market, the producers would lose money under such deals because global LNG prices are about $2/MMBtu and US LNG developers are charging about $2-$2.50/MMBtu for long-term liquefaction fees.

“In terms of obstacles to further contracting, the current state of the market is a huge challenge,” Jordan McNiven, an analyst at Tudor, Pickering, Holt & Co., told NGI. “It’s optically very difficult to enter into a long-term contract that is underwater the day you sign in.

“But over the long run, producers who have signed up for these contracts expect it will result in stronger pricing realizations,” he said.

U.S. LNG output has fallen significantly amid a supply glut and low prices overseas that have made it uneconomic to deliver the super-chilled fuel to key markets. Last month, shipbroker Poten & Partners said 130 U.S. cargoes would be cancelled between May and October. Up to 23 cargoes are expected to be canceled by Cheniere’s customers in August, Bloomberg reported Monday.

The pandemic has made it even more difficult for U.S. LNG developers to sign deals with customers as well as producers, delaying a number of projects that previously planned to make a positive final investment decision this year.

In the first deal, announced in June 2019, Apache Corp. agreed to sell 140,000 MMBtu/d for 15 years at unspecified global LNG prices minus certain costs to the proposed stage 3 expansion. The deal is contingent on Cheniere funding its proposed Corpus Christi expansion, which Cheniere has not yet done because it needs to sign more long-term, take-or-pay deals with either customers or producers. The Apache deal would be equivalent to about 0.85 mmty.

The EOG agreement was scheduled to begin early this year with the initial supplies of 140,000 MMBtu/d but an unspecified portion of the deal is subject to Cheniere funding Corpus Christi stage 3.

Cheniere developed what it called the integrated production marketing contracts with producers because it had become increasingly difficult to sign long-term capacity deals with customers. The innovative contracts allowed producers to potentially tap into higher global gas prices without building their own multi-billion-dollar LNG plants.

Apache and EOG were more willing to take the risk because they are prominent producers in the oil-rich Permian in West Texas and southeast New Mexico. They earn most of their revenue in the Permian from oil and have sold associated gas at low prices because of limited pipeline capacity.

“The Permian has been an obvious target (for such contracting) as the gas is quite proximate to LNG facilities and producers have been accepting very weak pricing for several years now, due to takeaway constraints,” McNiven said. “So, if there is an LNG option to get a better price than the local price, that could be quite attractive.

“Additionally, for most oil producers, they are most concerned with moving the gas, as they view it as a byproduct and tend to be less concerned on price,” he added. “From this perspective, having an LNG contract assures an end market for the gas where the alternative may be flaring, which can be unattractive for several reasons.”

But such contracts can be signed with producers in any basin, McNiven said.

Another obstacle to signing more such contracts is that there are only about 10 U.S. producers that have investment grade credit ratings.

Apache and EOG were both investment grade when they signed their respective Cheniere deals, but Apache has since been downgraded, he said.