Bankruptcies filed by producers in the North American oil and gas space slowed to two in November, according to the latest monthly Oil Patch Bankruptcy Monitor report published by Haynes and Boone LLP. 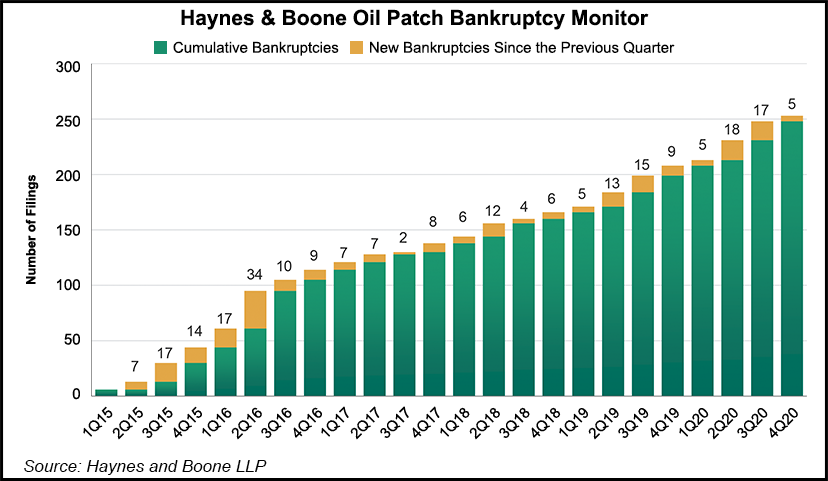 The trend shows a gradual reduction in bankruptcies this autumn compared to earlier in the year; there were three producer bankruptcies in October, according to Haynes and Boone.

In the third quarter of this year, 17 producers filed for bankruptcy, slightly below the 18 North American producer bankruptcies in the second quarter when the coronavirus stunned oil and gas markets.

The second quarter figure is second only to the 34 bankruptcies recorded in 2Q2016. Haynes and Boone began keeping records in 2015.

Combined with bankruptcy filings of oilfield services (OFS) companies, also tracked by Haynes and Boone since 2015, more than 500 bankruptcies have been filed in the North American oil and gas industry since then.

The total amount of secured and unsecured debt involved in the producer cases since 2015 is over $175 billion and the total amount of investor equity in producers that has been wiped out is many multiples of that amount.

On average, around ten OFS bankruptcies per month have been filed since July of this year.

Twenty-seven OFS companies filed for bankruptcy in the third quarter, the highest on record since Haynes and Boone began keeping records. In October and November, an additional 12 went bankrupt.

Through Nov. 30, 33 midstream companies have filed Chapter 11 bankruptcy in the United States since 2015, involving more than $22 billion in cumulative secured and unsecured debt.