Natural gas supplies that were interrupted at the Opal hub in Wyoming following an explosion and fire were being flowed through a different processing plant Thursday afternoon. Opal had been supplying up to 1 Bcf/d to interstate pipelines before the incident Wednesday at the Williams Partners LP facility. 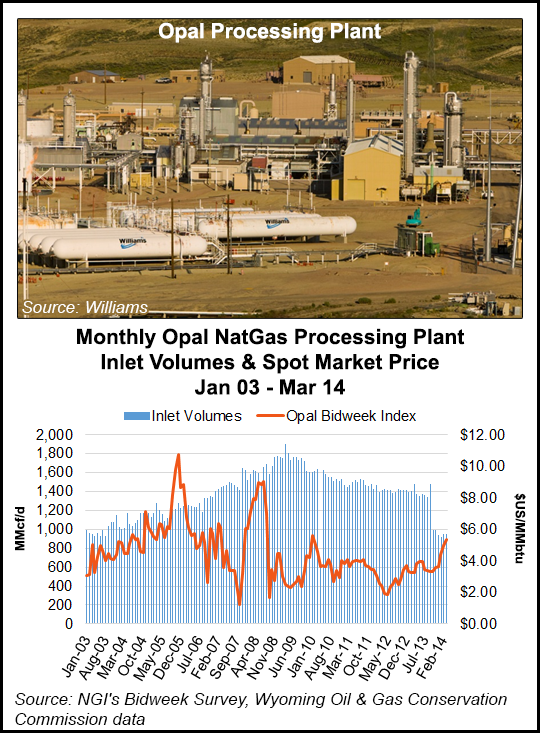 Genscape Inc. Senior Gas Analyst Wei Chien told NGI on Thursday that the firm’s data and analysis indicated that Pioneer Processing Plant was picking up the production that Opal no longer could process.

“We see pipeline nominations on Opal dropped by 962 MMcf/d from two days ago (Tuesday) while nominations on Pioneer increased by 684 MMcf/d,” she said. “Pioneer Plant is currently running at capacity. The decrease in Rockies exports to California is reflected on both the Ruby Pipeline and Kern River Gas Transmission.

“Flow dropped by 182 MMcf/d on Kern River…and dropped by 75 MMcf/d on Ruby…in the past two days based on the latest nominations.”

The explosion and fire, which triggered an evacuation from the nearby town of Opal (population 95) occurred about 2 p.m. MT on Wednesday. The shut-in trapped gas, supplied from the Rocky Mountains, is carried to interstate pipelines operated by Williams, Questar Corp., Kern River and Colorado Interstate Gas Co. LLC.

The hub facility also processes natural gas liquids and is the principal spot where prices are set for gas produced in western Wyoming and the San Juan Basin in Utah. Opal serves customers from the Pacific Northwest to Southern California, the Southwest and as far east as Ohio, according to the Wyoming Pipeline Authority. The industry and government officials keep an eye on Opal hub prices to monitor supply-demand trends in the region.

According to Williams, the explosion affected cryogenic processing unit TXP-3, one of five at the facility, which has a maximum capacity of 1.5 Bcf/d.

Opal usually transports around 4-5 Bcf/d at this time a year. The plant is able to produce about 2% of daily U.S. natural gas supply, but it has been running at less than full, Williams noted. The Wyoming Pipeline Authority said all of the hub’s other gas processing systems were operating normally on Thursday.

The fire, which was being allowed to burn out, was continuing Thursday afternoon, said Lincoln County, WY, Sheriff Shane Johnson. How long the facility could remain closed is unknown.

“The ramifications from the explosion could have been even worse, had it occurred just a few short months ago,” according to NGI’s Patrick Rau, director of strategy and research. “Inlet volumes into the Opal facility had been in gradual decline since mid-2009, but the falloff became much more acute last October, when processed volumes fell to an average of 989 MMcf/d from 1.474 Bcf/d the previous month. Inlet volumes since have averaged less than 1 Bcf/d in each month through March 2014, according to data from the Wyoming Oil & Gas Conservation Commission.”

BNP Paribas Director of Commodity Strategy Teri Viswanath concurred with Rau’s assessment. She told NGI the explosion could have had a bigger impact on the market had it occurred earlier this year. From what she knew Thursday, “the timing of this event has helped mitigate the impact on physical prices. Had the event occurred a month earlier, we would have witnessed a more profound impact on the market given the relative tightness of supply.”

Chien had said there could be some issues with rerouting the gas.

“Since there are so many processing plants in the region, we expect some of the production to be picked up by nearby processing plants,” she told NGI. “However, we are a bit concerned with the logistics to reroute the gas and the capability of other processing plants to increase output. We are carefully monitoring the pipeline nominations in the coming few days.

“We believe it will take another week for the plant to ramp up at a reduced capacity. The longer-term effect of this plant explosion should be limited.”

Kern River had notified shippers on Wednesday that Williams had cut volumes and would reduce flows to zero. The nomination deadline was extended to allow customers time to find replacement supplies.

The nearby town of Opal, which has about 95 residents, had been evacuated Wednesday but they were allowed to return to their homes on Thursday afternoon, said Lincoln County spokesman Stephen Malik. The fire still was burning, but it did not appear to pose a danger, he said. Williams had made accommodations for the displaced residents. More than 40 employees at the Opal facility also had been evacuated.

No one was said to be injured in the blast. First responders evacuated the area and closed a 45-mile stretch of U.S. Highway 30 near the plant; it was reopened Thursday afternoon.

Opal is about one-quarter of a mile off of the highway, according to Malik. A community meeting was to be held Thursday afternoon to provide residents with the latest information.

Williams has begun an internal investigation. A spokesman for Gov. Matt Mead said the state also would investigate the cause of the explosion once the site is secured.

Williams said its top priority is to ensure the safety of employees and the surrounding community. “The company is evaluating alternatives so that natural gas production can resume as soon as possible.”

Williams also operates the Northwest Pipeline, which runs through Opal to the Pacific Northwest. An explosion in March at a liquefied natural gas facility operated by Williams on the Washington-Oregon border remains under investigation (see Daily GPI, March 31).