Russia’s state-owned OAO Gazprom last year remained the champion of global natural gas production, and even though volumes were down year/year, the producer appears ready to defend its position as U.S. gas exports head to Europe, according to an analysis by Societe Generale (SG). 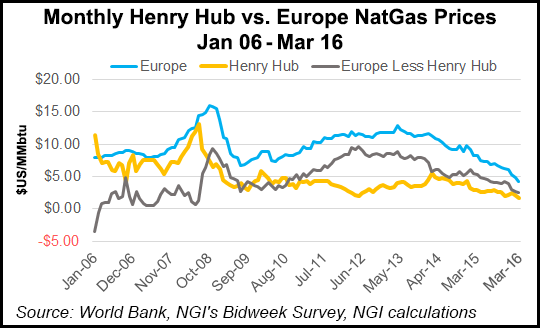 Over the past nine years, SG’s ranking of the largest gas producers has changed, with nine companies producing more than 1.765 Tcf/year (50 bcm/year) in 2014 versus seven producers in 2007, analyst Thierry Bros said.

“Gazprom remains the undisputed leader with a 12% worldwide market share,” Bros wrote in the new report. Gazprom’s gas production actually declined year/year in 2015 to 14 Tcf (418 bcm) from 15.67 Tcf (444 bcm) because of reduced demand from Ukraine. However, its production capacity remains at around 21.18 Tcf (600 bcm), which could allow it to ramp up output if demand for Russian gas strengthens.

By volumes, the nine largest gas producers contributed around 28% of total global volumes, led by Gazprom with 12%. ExxonMobil Corp. was No. 2 at 3%, followed by PetroChina (3%) and No. 4 Royal Dutch Shell plc at 2%. Russia’s largest independent gas producer, Novatek, moved into the ranking for the first time at No. 5 followed by France’s Total SA. Russian-owned OAO Rosneft made its debut at No. 7, while BP plc moved to No. 8 from fourth place. Chevron Corp. was the ninth largest global gas producer last year. ConocoPhillips, formerly a top gas producer, is no longer ranked.

This year’s ranking likely will see another shuffling of the leaders, Bros said. Shell’s takeover of gassy BG plc (see Daily GPI, April 8, 2015) should move it into the No. 2 slot above ExxonMobil.

Bros said he is keeping an eye on how the global leaders are preparing to defend their market share as U.S. liquefied natural gas (LNG) exports make their way to Europe.

“Combined, Russian and Norwegian gas exports to Europe reached a record high in 1Q2016,” he said. And earlier this month, Norway increased the production quota for Troll, its biggest gas field, to 1.16 Tcf (33 bcm) for the 2016 gas year, which starts on Oct. 1. This indicates that Norway and Russia “aim to defend their European market share” prior to the landing of U.S. LNG.

“The probability of a price war in the coming months is increasing, he said.

Last month Jefferies LLC analysts said U.S. gas may already be capping the UK commodity price (see Daily GPI, March 24). A review found that summer gas prices at the UK’s National Balancing Point were “in line” with the estimated cost to export gas to Europe. That could mean the United States has become the price-setter for the overseas market before actual cargoes arrive.