Natural gas production in Mexico averaged 3.81 Bcf/d during 2019, up from 3.71 Bcf/d in 2018, according to new data from upstream regulator Comisión Nacional de Hidrocarburos (CNH). 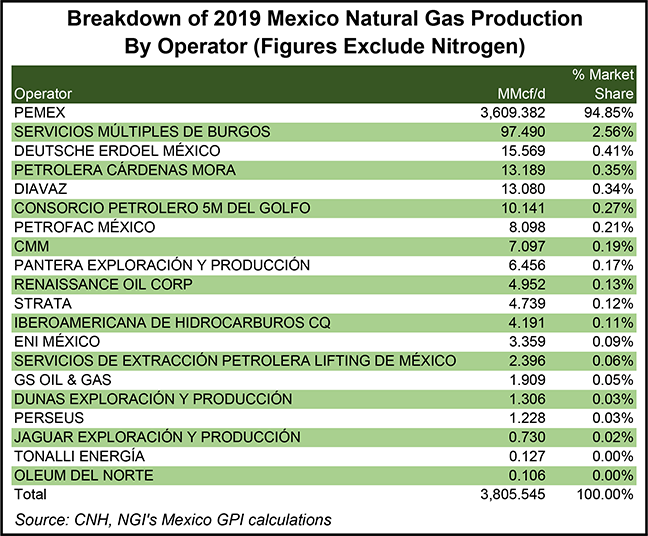 Output from fields operated by state oil company Petróleos Mexicanos (Pemex) averaged 3.61 Bcf/d for the year, compared to 3.58 Bcf/d in 2018.

Misión was formerly operated by Pemex, with activity carried out by SMB under an oilfield services (OFS) contract. In 2018, Misión became the first OFS contract at a natural gas-focused project to be migrated to an exploration and extraction contract under the framework of Mexico’s 2013-2014 energy reform.

Among Mexico’s hydrocarbon basins, Burgos is the largest producer of non-associated gas, meaning natural gas that is not a byproduct of crude oil extraction.

Natural gas marketers in Mexico transacted an average of 5.55 Bcf/d of the molecule during December 2019, down from 6.01 Bcf/d in December 2018, according to the IPGN monthly natural gas price index published by the Comisión Reguladora de Energía (CRE).

Pipeline natural gas exports from the United States to Mexico averaged 5.5 Bcf/d in October 2019, up from 4.9 Bcf/d in the corresponding 2018 month, according to the U.S. Energy Information Administration. 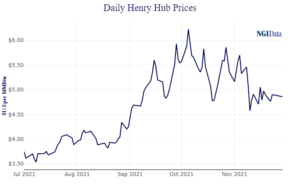 U.S. natural gas producers hedged most of their 2022 output before prices began to soar, setting the sector up for a slew of one-time losses on the wrong-way bets, according to Rystad Energy. When exploration and production (E&P) companies hedge their gas production, they typically take an opposite position in the forecast price. However, increasing…