The energy reform proposal presented by Mexican President Andrés Manuel López Obrador “does not impact the (existing) oil exploration and production contracts because they were signed by the Mexican state,” Julia González Romero, elected counsel at the González Calvillo law firm in Mexico City, told NGI’s Mexico GPI. “That is something that must be highlighted and should be done in flashing lights.” 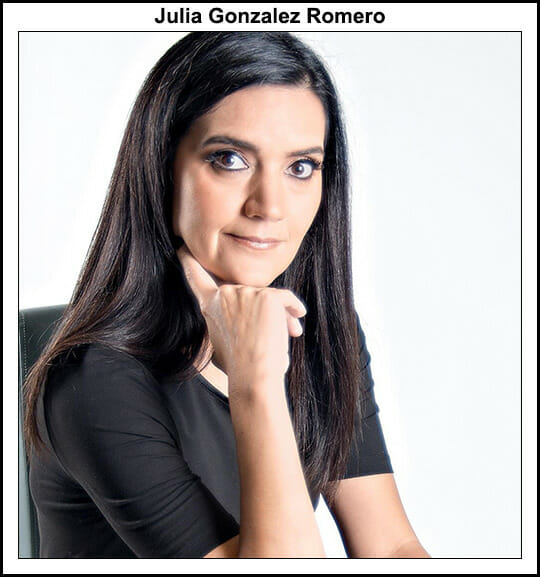 She added: “It’s important that this is highlighted to reduce the panic in the industry. These contracts are not being threatened by the constitutional amendment  proposal.”

González, who has worked as a lawyer in the private and public sectors in Mexico for 20 years, has been with González Calvillo since 2019 where she was voted a “rising star” in energy and natural resources in Mexico by The Legal 500. She is also a mentor for companies at the Tecnológico de Monterrey, a member of Voz Experta, which highlights the participation of female experts in predominantly male sectors, such as energy, and a member of the electricity and hydrocarbons committees of the Mexico Women’s Energy Network.

Previously, González was a founding partner and director of operations at Enûma, where she oversaw social impact evaluations in the energy industry and advised clients on community strategies for project development from 2015-2019. She has also held several posts within the government, including an advisor for congress, a legal advisor in the governance ministry and technical secretary in Mexico’s presidential offices.

NGI: What are your thoughts on the energy reform proposal and its potential impact in the sector?

González: This topic is really the flavor of the day in Mexico and has been discussed in many articles, webinars, columns, etc. during the last few weeks. I think the first impact of this proposal was the actual submission of the bill. For a while, the talk was of the probability of this being submitted, and, now that it has been, the conversation has changed to the uncertainty and worry that it’s generated and what could happen if it passes.

The worry for everyone — not just in the electricity sector but also in oil and gas — is the idea that the National Hydrocarbons Commission (CNH) and the Energy Regulatory Commission (CRE) could disappear and be eliminated. That has caused uncertainty across the industry, and I think that is the main impact we are seeing right now: the legal uncertainty of what might happen.

NGI: In terms of legal uncertainty, what are the legal risks that could arise in the Mexican energy industry?

González: As the proposal stands now, nearly everything is a legal risk. If the legislation is approved as is, it would revoke or eliminate permits and power purchase agreements (PPAs), which would create significant legal uncertainty. It would also create uncertainty for the citizens because we wouldn’t know where our energy would be coming from. If the amendment to the constitution passes, then private generators would have to immediately turn off their power and wait until secondary legislation passes. And that would be 180 natural days without any private participation. So, as a citizen, where would my energy be sourced from? That’s a huge concern, and there’s no clarity on that.

For the companies, the big question is: What happens to all these agreements I’ve signed and contacts I’ve entered into? Who’s going to pay for these huge projects I’ve already developed?

NGI: Could you explain a bit more about why private generators couldn’t create power for 180 days if the legislation passes?

González: The electricity reform initiative submitted by the president has nine transitory articles and, in the last transitory article, it says that Congress has 180 natural days to pass the secondary regulation. Clearly that’s necessary because if you’re not going to have permits, then how are you going to obtain the 46% of electricity generation that the CFE intends to buy from independent producers? So that’s very unclear and concerning.

Many other things are unclear. If you get rid of the CRE and CNH, for example, and give all of their powers and responsibilities to the Energy Ministry (Sener), who within the ministry is going to take on these roles? That’s a big question. Another one is: How is the National Center of Energy Control (CENACE) going to be absorbed by the CFE? And, what’s going to happen to Pemex? The initiative is clear that the CFE is going to have more autonomy, but it doesn’t say if it’s going to be a constitutional independent agency or if it’s going to be decentralized. It only indicates that the CFE will be granted more autonomy and doesn’t specify in what form. So, what will happen to Pemex if all the state productive companies are going to disappear?

NGI: Speaking of Pemex and the effect this reform might have on the oil industry, what sort of impact could the disappearance of the regulatory bodies have on existing exploration and production contracts?

González: The disappearance of the regulatory bodies is obviously a big deal, but it does not impact the exploration and production contracts because they were signed by the Mexican state. So, this constitutional amendment would not impact those contracts. It will likely impact the operations of those contracts because in the current structure, the CNH is the counterpart and is also the acting authority, so it will be challenging to create a new dynamic with the Energy Ministry. However, these contracts were not signed with the CNH, but with the Mexican state and are not at risk.

That is something that must be highlighted and should be done in flashing lights. It’s important that this is highlighted to reduce the panic in the industry. These contracts are not being threatened by the electricity reform proposal.

NGI: So if you’re a foreign company with shallow or deep water contracts, such as Chevron or Talos or Shell, for example, those contracts are not at risk of cancellation?

NGI: So the contracts facing the most risk of cancellation or revocation at this time are exclusively the generation deals?

González: Right. The generation permits first, because companies need to have a permit to generate electricity. And the PPAs. Those are the two things that this amendment seeks to revoke.

NGI: You mentioned that the electricity reform creates social risks at the citizen level. In your opinion, what are the sorts of social risks that could happen if this is approved?

González: I believe that all environmental risks are social risks. By approving an initiative that creates more environmental issues, that creates an impact at the social, citizen level. That said, I believe the huge risk if this bill passes would be that we as citizens have less access to energy. That’s obviously a big risk. And the other is the impact on the climate of course, because Mexico is quite vulnerable to climate change. If this bill is passed, I think it will put us decades behind in terms of environmental and climate change issues.

NGI: Do you think that, if this bill passes, that Mexico could see an increase in blackouts or be more vulnerable to electricity shortages?

González: I think that the potential outages or electricity shortages wouldn’t be a fault of the CFE, because I think the company has proven that it is an enterprise capable of operating the electricity system of the entire country for a long time. However, I do not believe that the CFE has the capacity to generate all of the electricity needed in Mexico to cover the demand. It’s pretty simple. The CFE isn’t capable currently to provide enough electricity for all, which is why outside generation is required.

NGI: The bill indicates that 46% of national electricity generation would be assigned to private producers. Is there any clarity on how that percentage would be distributed among private companies?

González: No, and that’s something that is going to be defined by the secondary regulation. So the congress, if this is approved, would have 180 days to issue the regulation that defines these terms.

NGI: So, if you’re the Mexican bread maker Bimbo, for example, and you buy renewable energy produced by a wind farm owned and operated by a private generation company, if the bill passes, would Bimbo immediately no longer be able to purchase its power from the renewable provider?

González: In this example, Bimbo would have to buy its energy from the CFE, which would be the only possible supplier.

NGI: Of all of the elements included in the electricity reform proposal, were there any aspects in particular that you found to be the most surprising or worrisome?

González: I actually was surprised by many things. The disappearance of the CNH and CRE is significant, but the President said previously that he believes those types of government authorities – independent regulatory bodies – are not worth the money. He has been very clear about that, so the inclusion of an attempt to disband them wasn’t particularly surprising.

NGI: Do you think there is sufficient support in the congress and senate to pass this initiative?

González: I’ve analyzed the numbers quite a bit and, some days I’m convinced it won’t pass, and other days I think it might. It’s hard to be certain and easy to speculate, but it’s hard to know what might happen. No one at this point can tell for sure.

I recently prepared a presentation on this and, if you count the Morena, the Labor Party (PT) and Green Party (PVEM) votes together in congress, that’s 277 votes. They’d need 57 more votes to pass the reform proposal. And that’s assuming the Green Party does vote with Morena to pass this initiative. The Green Party has a total of 41 votes, so their votes are crucial.

The opposition PRI has 71 votes. So, it is clear some opposition legislators would need to vote for the proposal for it to pass. It’s hard to tell if this might happen.

NGI: If you had to describe the mood of the Mexican energy industry, what would it be?

González: Uncertainty. And if I could use two words: legal uncertainty.