Private equity players BlackRock and First Reserve have agreed to take a 45% stake in the phase two segments of Petroleos Mexicanos (Pemex) Los Ramones Pipeline Project. The pipelines to carry U.S. gas to Mexico would be the first major midstream assets built with foreign capital since the recent reform of Mexico’s energy sector, the partners said. 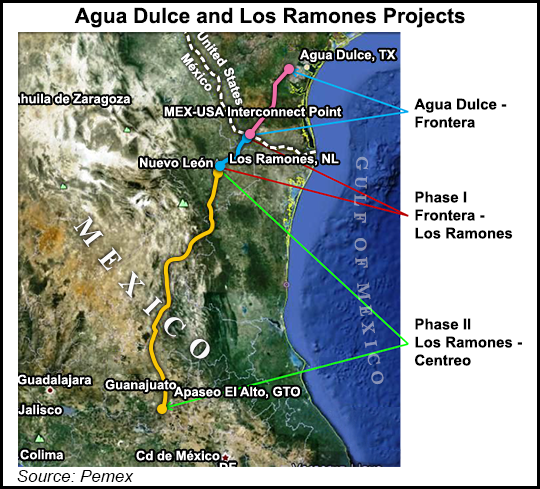 “There are incredible economic and social changes taking place in Mexico, which are positioning the country for strong, long-term economic growth…” said Armando Senra, BlackRock head of Latin America and Iberia. “Building upon the well-established track record of our business in Mexico, an expansion of our infrastructure investment footprint will offer BlackRock’s local and international clients access to previously untapped investment opportunities.”

The Los Ramones II Projects consist of the construction and operation of 462 miles of natural gas pipelines with capacity of 1.4 Bcf/d The pipelines will be “critical energy infrastructure” and are part of a broader effort to transport U.S. natural gas from the Eagle Ford Shale in South Texas to meet central Mexico’s growing demand. Construction of the projects began in 2014, with full commercial operations expected in mid-2016 (see Daily GPI, Oct. 30, 2014; Aug. 25, 2014). Both projects will benefit from a 25-year take-or-pay transportation agreement with Pemex Gas y Petroquimica Basica.

Los Ramones I, which runes from the Eagle Ford to Los Ramones in Nuevo Leon, Mexico, was inaugurated on Dec. 2. Phase II will reach Guanajuato to supply the central and western Mexico.

The reform of Mexico’s energy sector to allow investment from interests outside the country was heralded as a great opportunity for energy investors and for the country, which needs to grow is flagging production to support the country’s economy (see Daily GPI, Aug. 14, 2014; Aug. 7, 2014). Upstream oil opportunities were seen as the major prize for investors at the time (see Daily GPI, Sept. 19, 2014), but enthusiasm has waned with the collapse of global oil prices.

Somewhat overshadowed by the upstream last year, the midstream sector also is open to outside players (see Daily GPI, March 3; Sept. 29, 2014). Mexico has been concentrating exploration and production investment capital on oil, leaving natural gas production to decline. Gas is desperately needed to fuel new power plants and the industrial sector, and increasingly that gas is coming from the United States. Pipeline exports of U.S. gas to Mexico doubled from 2009 to 2013, and they are poised to double again from 2013 to 2018, according to the country’s energy ministry (see Daily GPI, May 29, 2014).

Pemex CEO Emilio Lozoya said the BlackRock/First Energy investment moves the country’s energy reform “closer to materializing into an economic driver for the country” and helps to build credibility among international investors.

“The opportunity for infrastructure in Mexico given recent reforms, positive demographics and economic stability and resilience in Mexico has definitely drawn our attention and we look forward to exploring other opportunities in the near future,” said BlackRock’s Jim Barry, head of the company’s infrastructure investment group.