Coinciding with higher natural gas prices, the share of U.S. electricity generation powered by gas is set to decline this summer compared to last, the Energy Information Administration (EIA) said in research published this week. 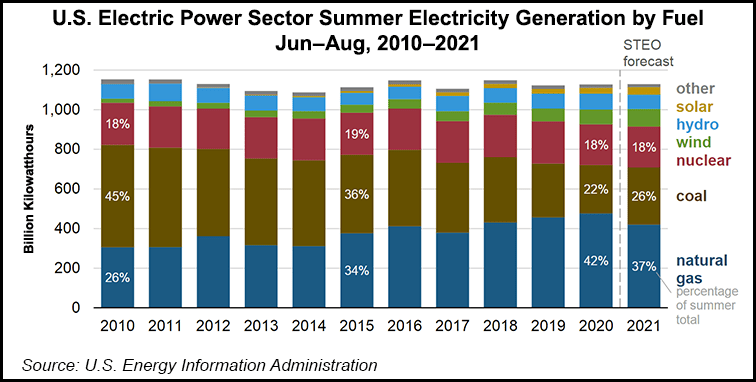 In its Summer Electricity Outlook, released as a supplement to the May Short-Term Energy Outlook, EIA said it expects natural gas-fired generation to total 420 billion kWh for June, July and August.

“Forecast U.S. coal generation will rise to 289 billion kWh this summer, representing an increase in generation share from 22% last summer to 26% this summer,” researchers said.

A main driver of the lower share of natural gas in the power stack will be commodity prices. EIA forecasts an average U.S. cost of $3.13/MMBtu for natural gas delivered to electric generators this summer, which would represent a 46% increase year/year.

Renewable sources, particularly wind and solar, are also expected to displace some natural gas-fired capacity this summer, EIA said. Renewables other than hydropower are to generate 138 billion kWh this summer, or 12% of total U.S. generation, according to the agency.

“The extension of federal tax credits is encouraging the continued construction of new wind capacity, much of which is in Midwestern states,” EIA said. “A large amount of large-scale solar capacity is under construction in Texas. This additional solar capacity, along with continued installation of new wind turbines, will likely lead to substantially less generation from natural gas-fired power plants in Texas this summer.”

Hydroelectric power is set to decline to 71 billion kWh in the United States this summer, versus 81 billion kWh last summer, EIA said, attributing the projected decline to the potential for lower-than-average water supply in the Pacific Northwest.