The natural gas spot price uplift from a warmer-than-normal start to the shoulder season appeared to wane during the week ended Sept. 20; driven by discounts in the West, as well as in the Northeast and Appalachia, NGI’s Weekly Spot Gas National Avg. fell 6.0 cents to $2.255/MMBtu. 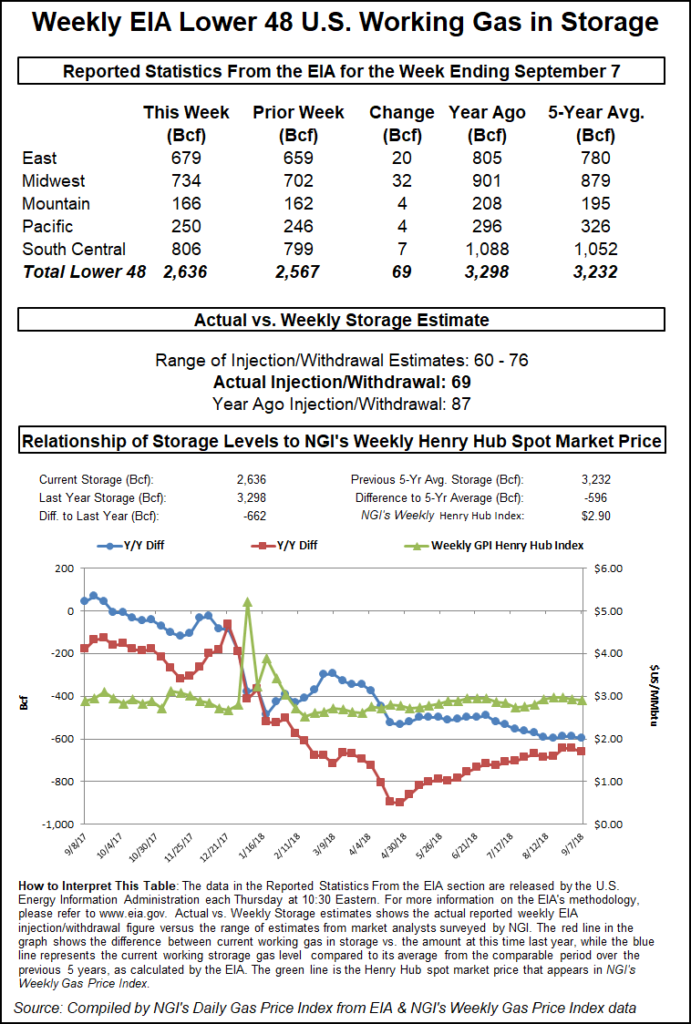 Aside from heavy rains over Southeast Texas from Tropical Depression Imelda, a continuation of warmer September temperatures over the southern United States accompanied mostly small adjustments for weekly spot prices in the Gulf Coast and Southeast. Houston Ship Channel picked up 6.0 cents to $2.590, while Transco Zone 4 finished 2.0 cents higher at $2.645.

Elsewhere, comfortable conditions contributed to deep discounts in the Northeast during the week. Transco Zone 6 NY dropped 31.5 cents to $1.885. The price weakness spread upstream to Appalachia, where Dominion South finished the week at $1.820, down 18.5 cents.

After rallying initially, the October contract ultimately lost ground during the week on a combination of “weakening cash prices” and a “very bearish” inventory report from the Energy Information Administration (EIA), Bespoke Weather Services said.

“While cash was weaker late week compared to early on, it has remained firm relative to prompt month,” Bespoke said. “Given that more heat is on the way, we may be able to hold the $2.50 support level for a while, even as the rest of the curve has risk for further decline with the weak balance picture currently.

“…Longer term, while the pattern is hot currently, above-normal temperatures, should they persist as we are expecting, become bearish over the next few weeks, opening up more downside under $2.50 once the November contract becomes prompt month, assuming it does hold before getting that far.”

Analysts at EBW Analytics Group also pointed to the potential for the widespread above-normal temperatures in the forecast to start having a bearish impact on demand as the calendar flips to October.

“Over the next three weeks…as warmer-than-normal weather extends further into October, air conditioning demand will largely disappear and early-season space heating demand will remain depressed,” the EBW analysts said. “As this occurs, injections could reach the mid-90 to 100 Bcf level, eliminating the storage deficit versus the five-year average almost entirely by mid-October and limiting the potential for futures to rebound.”

The EIA on Thursday reported an 84 Bcf injection into U.S. natural gas storage for the week ended Sept. 13, matching the 84 Bcf build EIA recorded for the year-ago period and slightly higher than the five-year average 82 Bcf injection.

Prior to the report, market observers had been looking for a build in the upper 70s Bcf, with predictions ranging from 71 Bcf to 85 Bcf. Intercontinental Exchange futures had settled at 81 Bcf, while NGI’s model predicted a 79 Bcf build.

By region, the Midwest posted the largest weekly injection at 34 Bcf, followed by the East, which refilled 24 Bcf for the week. The Mountain region injected 5 Bcf, while the Pacific injected 4 Bcf. In the South Central, 15 Bcf was injected into nonsalt stocks, along with 1 Bcf into salt, according to EIA.

Tudor, Pickering, Holt & Co. (TPH) analysts said the build indicates around 1 Bcf/d of oversupply after adjusting for weather, consistent with the prior week.

“Compared to the five-year average, inventories are sitting at a 2% deficit, and we expect this to flip to a 3% surplus as we approach year end, with year-to-date injections into storage tracking nearly 40% above historical averages,” the TPH analysts said. “Sur de Texas-Tuxpan began flowing this week, with exports averaging 0.6 Bcf/d, in line with our forecast on start-up. If sustained, we see a new floor being set on Mexican exports in the 5.4 Bcf/d range for the remainder of 2019.”

With generally comfortable temperatures expected across northern portions of the country over the weekend, double-digit discounts were the norm for the Midwest and Northeast. Chicago Citygate tumbled 25.0 cents to $1.985.

Over the weekend and into Monday, NatGasWeather said it expected strong high pressure to continue across Texas and the southern United States, leading to highs in the 80s and 90s for strong late-season demand.

“The western and central United States will be unsettled as weather systems bring showers and highs of mostly 60s to 80s, with lows of 30s and 40s,” the forecaster said. “The corridor from Chicago to New York City will be comfortable with highs of 70s to 80 for light demand. Overall, some demand across the southern United States, but not enough” across the northern part of the country.

A scheduled outage on Dominion Energy Transmission’s PL-1 line was expected to restrict more than 0.5 Bcf/d of deliveries into Virginia and Maryland starting Saturday, according to Genscape Inc.

“The outage, due to pipe replacements, will require deliveries to eight meters on PL-1 to be supplied by receipts from two interstate interconnects,” Genscape analyst Anthony Ferrara said. “…Furthermore, deliveries to four other meters will be completely cut off for the duration of the event.” These four meters “will not be able to accept any deliveries” and “have averaged 183 MMcf/d and maxed at 258 MMcf/d of total deliveries over the past 30 days.”

The eight meters on PL-1 accepting deliveries during this outage, which is scheduled to run through Sept. 28, could face supply constraints, according to Ferrara.

As of Friday, liquefaction operations at Dominion’s Cove Point liquefied natural gas (LNG) terminal had shut in, with the outage expected to last until Oct. 12, according to Genscape analyst Allison Hurley, who cited evidence from “pipeline nominations and Genscape’s infrared monitoring observations.”

“The outage is expected to last three weeks as per a previously scheduled event that had since been removed but was collected as part of Genscape’s notice collections,” Hurley said. “…Genscape analysts have kept a close eye on Cove Point operations since Dominion Energy Cove Point (DECP) posted a planned service outages notice — that was removed later that same day — which included a 22-day annual outage at Cove Point” scheduled to begin Friday.