Ending a sluggish start to the year, pressure pumpers are increasing their horsepower work in Lower 48 formations, particularly in the Haynesville Shale, which may lead to a tighter market later this year, according to an analysis by Westwood Global Energy Group. 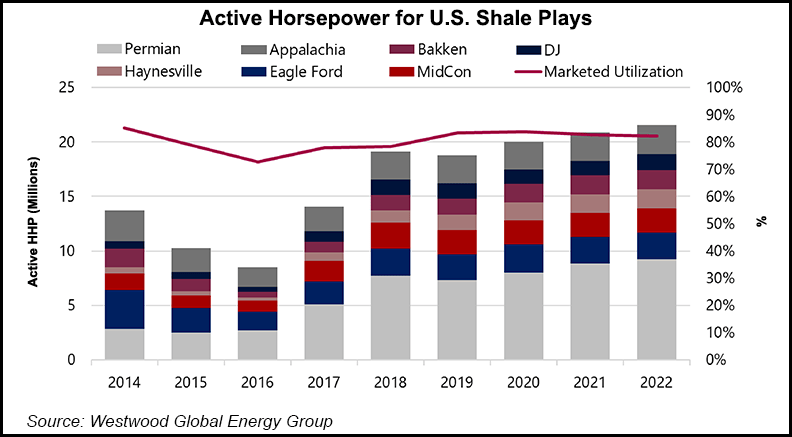 A 9% increase in hydraulic horsepower (HHP) demand from 4Q2018 through 4Q2019 may point to a potential undersupply in some regions of the country, including the Permian Basin, analysts said in a report compiled using Energent Group and Westwood data.

The quarterly deep dive was done on the seven key U.S. unconventional areas, which besides the Permian were the Appalachian and Denver-Julesburg (Niobrara) basins, the Midcontinent and the Bakken, Eagle Ford and Haynesville shales.

The data compiled historical and forecast views from 2014-2022.

“Looking across all seven basins, more than 4% of fracture horsepower was removed from active status in 4Q2018, followed by just over 1% in 1Q2019, but pressure pumpers are expected to place more than 300,000 HHP back into the field by 2Q2019,” analysts said.

Growing HHP demand in the Haynesville in East Texas and Louisiana “represents more than 35% of total active horsepower growth in 2Q2019.

U.S. growth overall, however, may be stymied by continued active horsepower reductions in the Permian during the first half of the year. The largest basin in the Lower 48 saw a 5% decline in active fracture horsepower during the first three months, but the declines are expected to trough in 2Q2019.

Alleviating the Permian’s midstream bottleneck, as well as the subsequent work down of the growing drilled but uncompleted, i.e. DUC backlog, should push HHP demand up 14% from 3Q2019-4Q2019. That in turn should result in “tighter marketed utilization moving into 2020” as pressure pumpers work to reallocate crews back into the fields.

“Top pressure pumpers are securing contracts with key accounts, especially the majors that are doubling-down in the Permian,” said Westwood’s Todd Bush, vice president of the commercial business. He pointed to the expansions recently announced by the Permian’s top explorers, ExxonMobil Corp. and Chevron Corp.

The supermajors together were running 14 fracture crews in the Permian between January and March, Bush said. “Both companies have ambitious plans” that will require more HHP in the twin Delaware and Midland sub-basins.