Premier Oil plc expects to kick off an appraisal program for the offshore Zama discovery in southern Mexico by 2H2018 or early 2019, according to a company trading and operations update. 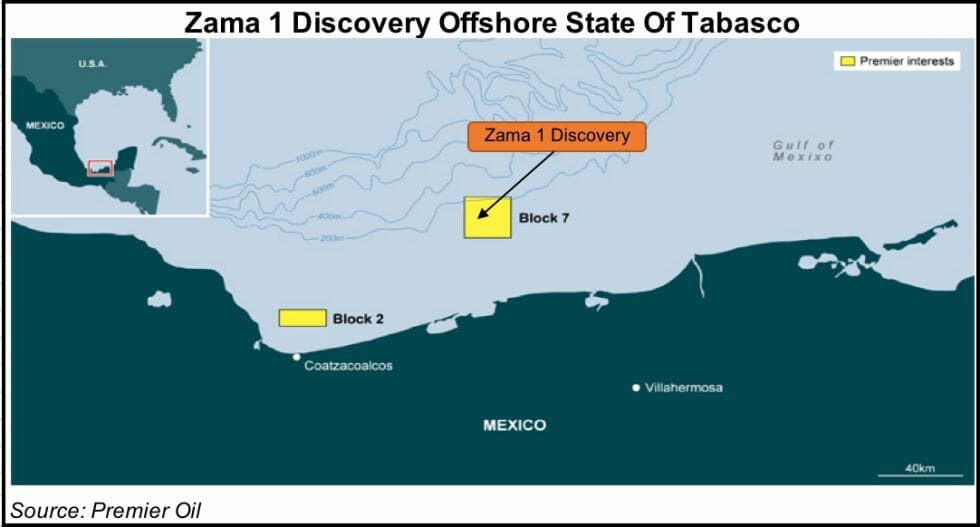 “We’re sitting down with our partners and planning the next phase, which is a four-well appraisal program,” Premier CEO Tony Durant said last week.

Premier and its partners announced in July 2017 a world-class find at the Zama-1 well on Block 7 in the Sureste basin, off the coast of Tabasco state. The discovery is estimated to hold in place 1.4-2 billion bbl of mostly light oil.

Houston-based Talos Energy LLC operates the block with a 35% interest. Premier holds a 25% stake and Sierra Oil and Gas S. de R.L de C.V. owns the remaining 40%. The three companies won the rights to explore Block 7 in 2015 at Mexico’s first licensing round for private and foreign companies.

Zama is one of two major finds by private operators since the 2013-2014 energy reforms opened up the upstream sector. The other is Eni SpA’s 2 billion boe offshore project, also in southern Mexico.

The upstream oil and gas regulator, the Comision Nacional de Hidrocarburos (CNH), in November approved the 2018 Block 7 work program, budgeted at $9.2 million. The regulator also approved a $9.6 million program for Block 2, also awarded in 2015. Premier and its partners have until September 2019 to submit appraisal plans for the two blocks.

For the Zama discovery, the partners are also working with state oil company Petroleos Mexicanos (Pemex), which controls a neighboring block, according to Premier. At the time of the discovery, Talos indicated that the field could extend into a different block.

Mexico lacks clear and established rules for shared oil and gas reservoirs due to Pemex’s decades-long monopoly over the upstream sector, prior to the recent energy reforms.

To this end, the Mexican Energy Ministry (Sener) in October issued a draft regulation outlining the rules and procedures for the unitization of shared reservoirs. As of publication, the draft regulation had not been finalized and remains in the public comment phase.

Zama is not the only project in Mexico whose reservoirs may extend into a separate block. A discovery on Pemex’s M-Okom-4 offshore exploration area could be in contact with an adjacent block owned by Houston-based Fieldwood Energy LLC and Mexico’s Petrobal, according to a presentation at a CNH meeting in October.

In its update, Premier said it would announce full-year 2017 results on March 8. The company expects production for the year to average 75,000 boe/d, in line with guidance and up 5% from 2016. It also estimates full-year capital expenditures (capex) at $305 million, below revised guidance of US$325 million, and operating expenditures (opex) of $16.50/bbl.