Proposed legislation in Mexico to favor state utility Comisión Federal de Electricidad (CFE) in the electricity dispatch order should not be viewed as bullish for the natural gas market, despite CFE’s plans to add more gas-fired capacity over the coming years, according to local energy consultant David Rosales. 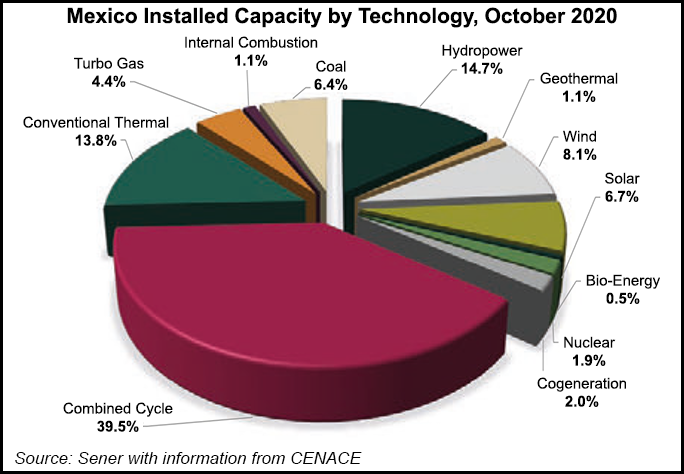 Even if CFE follows through on its planned capacity additions, abandoning the merit-based dispatch order would destroy incentives for potentially hundreds of private sector projects, Rosales said, not only in power generation but in the industrial segment as well, a major consumer of gas and electricity in Mexico.

Therefore, “we expect that it should be and will be challenged by several entities,” Rosales said.

One such entity is the U.S. Chamber of Commerce, which spoke out against the bill on Friday.

“Such drastic changes would open the door for the reinstatement of a monopoly in the electricity sector and, we believe, would directly contravene Mexico’s commitments under [the USMCA].

“Further, these changes would significantly raise the cost of electricity and limit access to clean energy for Mexico’s citizens.”

Herrington called the proposal “the latest in a pattern of troubling decisions taken by the Government of Mexico that have undermined the confidence of foreign investors in the country at the precise moment enhanced foreign direct investment in Mexico is needed more than ever.

“As the country emerges from its worst economic contraction since the Great Depression, nothing will prove more vital to its recovery than the jobs and growth that U.S. and other foreign investors generate.”

The Chamber, therefore, is calling on the Mexican government to withdraw the bill “and engage with the private sector on tangible solutions for bolstering the energy industry,” Herrington said.

He added, “We look forward to working with the Biden Administration, key trading partners, and our partners in Mexico to support a competitive electric power sector in Mexico that provides a level playing field for the private sector and contributes to sustainable growth and job generation.”

To be sure, he said, Mexico’s gas imports from the United States will continue to grow, if only because of stagnant domestic production by state oil company Petróleos Mexicanos.

But an uneven playing field in the sector will stifle development of a robust, competitive natural gas market within Mexico, Rosales said, diminishing the growth of Mexico as an export market for U.S. producers.