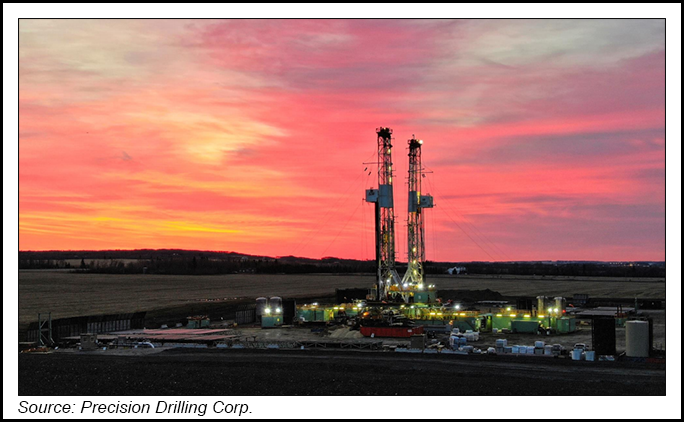 During a conference call to discuss third quarter results, CEO Kevin Neveu said the Lower 48 rig count already has improved off the “third quarter lows back to 25 rigs running today.” Meanwhile, Canadian seasonal activity recovery to date “has been largely led by deeper, gas and liquid-rich plays and is expected to continue into the winter season with a modestly improved outlook with 26 rigs running today.”

The Precision team is “simply grinding through the toughest downturn in the history of the oil and gas industry,” he said. “And while difficult at the time, I’m pleased that the swift and aggressive actions we took to dress this downturn up resulted in better than expected financial results…It is the people of Precision most who do not have the option to work from home who have continued to drive the strong operational results.”

As important, “it seems like the worst may be behind us. We’re beginning to see indications for our customers that their 2021 drilling plans and requirements will increase at least modestly the lows of 2020. Furthermore, we have several clients now inquiring about longer-term contracts…”

With the prospect of increasing activity under the current structure, “we believe we can triple rig utilization with only nominal increases” in fixed costs as well as general and administrative expenses. And the gains should come “with no foreseeable need to build new rigs.”

In Canada, Precision has seen positives as the federal government stepped in to provide financial support and economic stimulus programs in response to the Covid-19 pandemic, Neveu said. Precision reports in Canadian dollars.

The Canadian government in April launched a $2.47 billion ($1.8 billion) wells and emissions cleanup program to salvage jobs during the industry slump caused by the pandemic. British Columbia in September also launched a $50 million ($38 million) first stage of its share in Canada’s government-financed relief program to clean depleted and abandoned oil and gas wells. And earlier this month Alberta producers predicted their annual taxes would drop by $85 million (US$64 million) thanks to new provincial and municipal reductions.

“We are encouraged by the government of Canada’s $1.7 billion wellsite abandonment and rehabilitation program, Neveu said. The program, set to run through the end of 2022, “will support industry activity levels and provide thousands of jobs throughout Western Canada…

“As the use of service rigs is an integral part of the well abandonment process, we believe our well servicing business is positioned to capture these opportunities,” he said.

Precision during 3Q2020 also “saw a rise in the number of approved abandonment applications and the distribution of program funding to oilfield service providers. Accordingly, we expect our abandonment service activity to increase in 4Q2020 and support additional demand through the end of the wellsite abandonment and rehabilitation program in 2022.”

“The CEWS program has benefited Precision and our employees as it has allowed us to retain a higher employment level for Canadian positions within our organization,” Neveu said. “As a result, we are highly supportive of this effective government program and are encouraged by the recent commitment of the Government of Canada to extend the program to June 2021.”

Year-to-date, Precision has secured 18 term contracts for its drilling rigs. At the end of September, it had 39 contracts for its top-of-the-line walking rigs, aka the Super Triple Alphas. The rigs this year alone have drilled more than 500 wells.

During the third quarter, drilling revenue was mixed in the United States and Canada.

U.S. revenue increased to US$28,334/utilization day from US$23,092 in 2019, primarily because of revenues from idle but contracted rigs and turnkey drilling. Revenue from idle but contracted rigs totaled US$10 million, with turnkey bringing in US$2 million, versus zero in 2019. Operating costs increased to US$16,037/day in U.S. operations from US$14,487.

Precision recorded a net loss of $28 million (minus 10 cents/share) versus year-ago losses of $4 million (minus 1 cent). Recognized restructuring charges were $2 million, and there was $8 million assistance from the federal government’s CEWS program.

Revenue fell 56% year/year to $165 million. Cash balance was $178 million at the end of September, up $3 million from the end of June. Capital expenditures totaled $3 million, down $21 million year/year.