Looking to capitalize on numerous opportunities at favorable prices, Anadarko Petroleum Corp. is upping its 2018 capital spending in part so that it can focus on its core acreage in the Permian and Denver-Julesburg (DJ) basins, as well as develop an emerging opportunity in the Powder River Basin (PRB), CEO Al Walker said Wednesday. 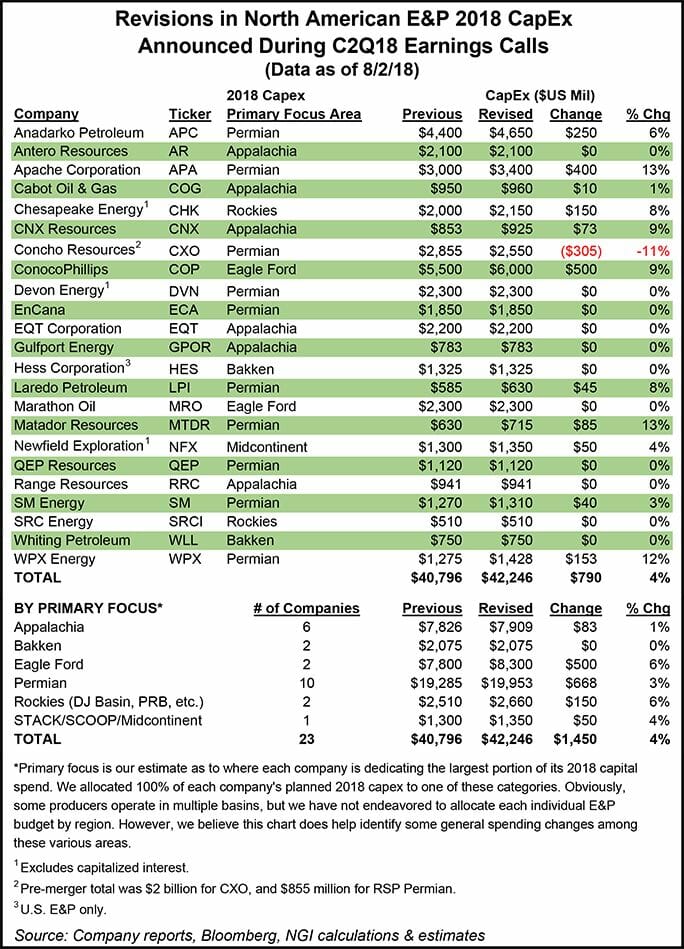 Even as the company’s onshore focus grows, Anadarko’s U.S. domain is still spread across its “three Ds,” defined as the Delaware, DJ and deepwater Gulf of Mexico (GOM).

Offshore in the deepwater GOM, output averaged 115,000 boe/d in 2Q2018 as it leveraged its infrastructure, which included the third tieback to its 100%-owned Horn Mountain facility. Development drilling is also underway in the North Hadrian field, which is to be tied back to Anadarko’s Lucius spar.

Total company sales volumes of oil, natural gas and natural gas liquids worldwide hit 58 million boe, or an average of 637,000 boe/d, at the high end of guidance. However, there’s no doubt the U.S. onshore has become a major part of the super independent’s growth plans.

Domestic onshore oil volumes alone jumped by 47% in the second quarter from a year ago, fueled by the Permian Delaware sub-basin in West Texas.

“During the second quarter, we delivered a 54,000 b/d increase in our U.S. onshore oil volumes over the second quarter of 2017 on a divestiture-adjusted basis, while improving our per-barrel margins to nearly $31.60,” Walker said. Among other things, the project management and midstream teams started up Anadarko’s initial regional oil treating facility (ROTF) in West Texas.

“This is a major accomplishment, as the Reeves ROTF and newly commissioned North Loving ROTF are catalysts for production and cash-flow growth in the second half of this year and beyond,” he said.

Anadarko has not increased its operated activity level, but the current commodity price environment “has resulted in some modest service cost inflation, as well as an increase in nonoperated activity and nonconsents, which present very high return opportunities…We have also continued to core up acreage in the Delaware and DJ basins, which has enabled us to drill longer laterals with higher working interest for enhanced returns.”

Anadarko already was earmarking 85% of its initial $4.2-4.6 billion capital expenditures (capex) worldwide this year to domestic programs. However, based on its optimism about the current environment, full-year capex has been bumped up by $250 million. The updated guidance excludes about $100 million of leasehold acquisitions in the re-emerging PRB.

Walker during a conference call Wednesday morning discussed appraisal efforts ongoing in Wyoming’s PRB, “where we believe we have another onshore oil opportunity in the southern portion. As an emerging area of interest by our industry, this part of the Powder has been receiving increased visibility. This play was discovered several years ago and since then we have been evaluating its potential.”

Anadarko today has established a core position of more than 300,000 gross acres, which Walker said were accumulated “at an average cost of less than $2,500 per acre…”
The work in the PRB is focused on the Turner formation, which already has drawn several producers and midstream operators. Drilled wells in the play have rates exceeding 2,000 boe/d, Walker said, with 80%-plus oil cuts.

“Once we’ve completed our appraisal work and finalize our plan of development and midstream evaluation, we expect this basin to eventually compete for capital within our portfolio, increasing our optionality,” the CEO said. “During this time of transition, we will continue to look for ways to attractively add to our footprint and where possible lock up the acreage.”

Meanwhile, in its core Delaware position, oil production in 2Q2018 achieved record levels averaging 62,000 b/d, an 88% increase from a year ago. The quarter was highlighted by the startup of the Reeves ROTF in May, as well as a record number of wells turned to sales.

The company also advanced its first full pad development at the Silvertip-A location in Loving County in West Texas, where it has completed 12 extended-reach lateral wells targeting multiple intervals in the Wolfcamp-A formation. The wells are expected to begin producing in the second half of 2018 and would flow to the recently commissioned North Loving ROTF.

In Colorado’s DJ, Anadarko is continuing a horizontal drilling campaign that features natural gas-powered rigs and noise-reduction technology, two enhancements that improve the compatibility of operations with local communities. During the quarter, the DJ averaged net production of 261,000 boe/d.

In addition, the Anadarko-led Mozambique liquefied natural gas (LNG) export project is on track for a final investment decision early next year, Walker said. The company and its contractors expect to realize substantial cost savings, with Anadarko now expecting to deliver the first two onshore liquefaction trains with 12.88 million metric tons/year capacity for under $600/metric ton.

Second quarter capex, excluding majority ownership in Western Gas Partners LP, was about $1.5 billion; the company closed the quarter with $2.3 billion of cash on hand. After completing the $3 billion share-repurchase program at the end of June, Anadarko announced a $1.0 billion expansion, as well as a $500 million expansion of its debt-reduction program to be funded by future free cash flow.