Two leading Price Reporting Agencies (PRA) indicated that the decline in reported transactions has leveled off in recent years, and they remain confident that the data received from the market is sufficient to determine published natural gas indexes. 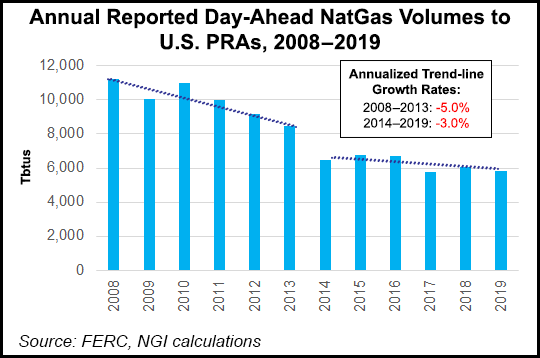 Representatives from Natural Gas Intelligence and S&P Global Platts each cited recent stabilization in reporting numbers and access to transactions conducted on and submitted by the Intercontinental Exchange (ICE). NGI and Platts are the only two PRAs with access to the ICE transaction data, and each cited this as a key differentiator during an online forum Tuesday hosted by the Natural Gas Supply Association.

FERC requests all those who buy and/or sell at least 2.2 million MMBtu of U.S. natural gas in any particular year to fill out a Form 552 questionnaire, which the Commission relies on to monitor the health of natural gas market price transparency, among other things. The Federal Energy Regulatory Commission usually posts on its website by late May an Excel spreadsheet of the raw individual company data, but it was postponed this year because of Covid-19.

According to NGI’s calculations of the individual submissions available from FERC, preliminary 2019 data showed “reported” bidweek volumes were basically flat from 2018 at 4,253 TBtu. Day-ahead spot reported transaction volumes were down 4.4% to 5,818 TBtu after increasing by 5.5% from 2018 to 6,088. Volumes were reported to at least one PRA.

However, reported volumes only tell part of the transparency story. NGI’s natural gas price indexes have since 2008 included transaction data from ICE through a protocol that maximizes the amount of relevant data in the company’s indexes. It removes deal reports from ICE that are duplicative of the companies that report directly to NGI.

Platts in 2016 struck an agreement to include the same ICE data in its indexes.

Rau said gas volumes reported to PRAs have declined notably since 2011, but they have stabilized in the past three years for both day-ahead and bidweek reported transactions.

“The industry likely has reached a base level” that is sufficient, according to Rau. Moreover, the base level of directly reported volumes, combined with the ICE data, provide ample information to generate “robust” indexes.

About 81% of natural gas transactions reported to FERC on Form 552 depend on price indexes; the other 19% is made up of  fixed-price and physical basis deals eligible to be reported to index publishers, said Platts’ Mark Callahan, editorial director for power and generating fuels pricing. Callahan noted that FERC has not called for any additional comments reporting volumes since its technical conference in 2017, when the leveling off took root.

Reported volumes to both NGI and Platts in the first half 2020 were down from the same period of 2019, though volumes were said to be off because of the coronavirus pandemic and related producer shut-ins.

Rau noted that, in the wake of the pandemic, increased price volatility has added to liquidity. Interestingly, he said, bidweek volumes have taken some share from day-ahead transactions. Low prices may be incentivizing more buyers to lock in bidweek prices rather than playing the day-ahead market, he said.

The potential for producer consolidation amid the virus-imposed downturn could prove another positive for reported volumes, Rau said, because stronger players could buy out weaker ones, and the former are more likely to report to PRAs.

Longer-term, growing U.S. liquefied natural gas (LNG) exports also would be a positive for reported volumes, according to Rau. The pandemic has been a drag on exports, with demand from Europe and Asia seizing amid economic slowdowns and dampened industrial energy needs across both continents. In a post-pandemic world, however, the United States would be positioned to meet a resumption in LNG demand, he said.

The United States is expected to add 2.7 Bcf/d of liquefaction capacity this year and another 4.5 Bcf/d is currently under construction, according to the Energy Information Administration.

As a backstop, NGI Executive Publisher Dexter Steis said assessments are also an option to ensure reliability. Where the number of transactions is insufficient to calculate the weighted-average cost of gas, NGI could assess specific locations to determine prices. NGI began assessing FGT Citygate in Florida earlier this year, as most trades there are done on a differential to FGT Zone 3.

Steis said the current base of reported volumes is “more than adequate,” but “if all else fails, NGI stands ready to assess markets.”