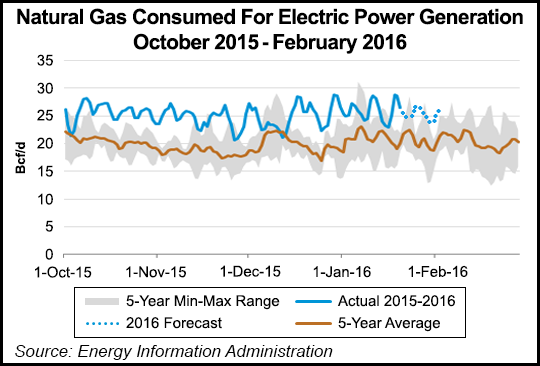 “Low natural gas prices and growth in natural gas power generation infrastructure are the main drivers in the consumption growth,” EIA said in its latest Natural Gas Weekly Update. “This is a continuation of a trend, with 2015 being a record-high year for power burn, according to preliminary Bentek data. Bentek estimated that power burn averaged 26.4 Bcf/d in 2015, 6.8% greater than the next-highest annual average, in 2012.”

“Through October 2015, around 11 GW of coal-fired generation was retired, although this generation was likely already running at a reduced capacity factor, meaning that those plants were active for fewer hours a day than before,” EIA said Friday.

For the first time ever, natural gas surpassed coal for the largest share of domestic power generation in April of last year, according to EIA’s monthly generation data. Gas subsequently surpassed coal in July, August, September and October, with November and December data not yet available (see Daily GPI, Dec. 28, 2015; Dec. 2, 2015; Oct. 28, 2015).

“Although final numbers are not yet in, our estimates point to total U.S. power burn averaging around 26.4 Bcf/d in 2015, enough to beat the previous record of 24.8 Bcf/d set in 2012,” Potter said. “Assuming normal summer weather, our current forecasts point to a 2016 power burn coming in at 26.2 Bcf/d. If temperatures were to match those of summer 2015, which was 8% warmer than normal, we think power burn could be boosted by another 400-500 MMcf/d in April-October, potentially setting a new power burn record.”