Unprecedented cold weather across the United States continued to disrupt energy markets on both sides of the border Tuesday as power outages hit Mexico for a second straight day. 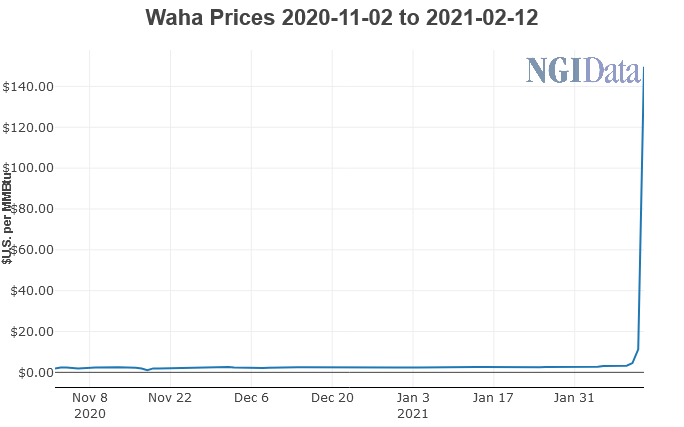 Mexico’s electric power operator Centro Nacional de Control de Energía (Cenace) said 2,200 MW of power was still offline in the northern states of Chihuahua, Coahuila, Nuevo León and Tamaulipas, and pleaded Tuesday for the efficient use of energy as the crisis was still days from being over.

Cenace and Mexican state utility Comision Federal de Electricidad (CFE) blame limited natural gas imports and surging natural gas prices for the outages. Mexico imports 70-80% of its natural gas from the United States and 60% of the nation’s power plants run on the fuel.

Due to “bitterly cold air” making its way into the Midcontinent and Deep South of the United States, “massive amounts” of natural gas production were offline as of early Tuesday, as were numerous gas-fired power plants, EBW Analytics Group analysts said in a note to clients.

The “extreme cold” has “brought chaos to the U.S. oil, gas and power markets,” the EBW analysts said. “Texas has been hardest hit… More than 30 natural gas pipelines have declared force majeure and at least 7 Bcf/d of natural gas production has been shut in due to freeze-offs, gas processing plant shut-ins and pipeline outages.”

Texas is central to Mexico’s natural gas supply, and prices there are setting records.

In his daily press conference on Tuesday morning, Mexico President Andrés Manuel López Obrador said that 4.7 million households were impacted on Monday by the power cuts, putting the country roughly on par with the number of clients impacted by power cuts in the United States.

He said 80% of power had been restored as of Tuesday morning.

The Mexican president also once again decried fuel imports and said the country would seek self-sufficiency in natural gas, without providing details. His administration has stopped new oil and gas rounds and has banned hydraulic fracturing.

Natural gas production in Mexico averaged 3.97 Bcf/d in December, up from 3.91 Bcf/d in December 2019, according to data from upstream oil and gas regulator Comisión Nacional de Hidrocarburos (CNH).

But experts have said that production growth will be difficult unless the government revives bid rounds for non-associated gas in prolific basins such as the Burgos, Sabinas-Burro Picacho and Tampico-Misantla.

The Call for Storage

The freakish cold in the United States has led to renewed calls in Mexico for natural gas storage. Today, Mexico still relies on its two liquefied natural gas (LNG) import plants for system balance, leaving it vulnerable to unforeseen complications in supply.

CFE has ordered two cargoes of LNG to compensate for the shortfall, Reyes said.

But longer term, CFE issued a statement on Monday describing a commercial strategy prioritizing the development of storage in a bid to prevent future events like this one from happening.

In March 2018, energy ministry Sener published a gas storage policy calling for 45 Bcf of strategic inventories to be operational by 2026. A storage construction site was nominated for the first 10 Bcf at the depleted Jaf dry gas field.

The new administration in Mexico, however, has not continued with the project.

The ongoing energy crunch is the second major power disruption to hit Mexico in as many months. CFE blamed intermittent renewable energy and a brush fire for a massive Dec. 28 power outage that took 8,696 MW of electricity offline, causing about one-third of the country to lose power.