Even as Lower 48 natural gas production has reached record highs in recent days, strong power demand in the South Central region of the United States stands to challenge storage injections going into the peak summer period, according to Barclays Commodities Research. 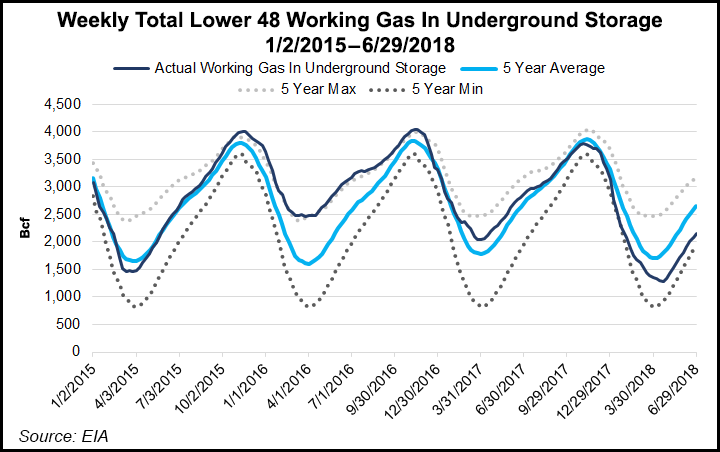 Daily natural gas flow volumes have climbed just north of 80 Bcf/d on a handful of days since the end of June. Growth has come from shale plays including the Marcellus and Utica despite infrastructure issues in the region, like the explosion on Columbia Gas Transmission’s Leach Xpress that has restricted flows on the pipeline and the still pending in-service requests for the final portions of Energy Transfer Partners LP’s Rover Pipeline. Incremental additions to takeaway capacity in the Permian Basin have allowed for continued production growth in that region as well.

East Daley analysts have also noted that production from the Louisiana side of the Haynesville Shale “has been on a tear” since early 2017 as commodity prices have rebounded from 2016 lows. Natural gas production volumes hitting interstate pipelines have nearly doubled in the past 18 months, they said.

Despite the surge in production, storage inventory deficits of historical levels remain.

The persistent deficits have come as power demand is off to a strong start this summer, Barclays said. During the recent heat wave that started at the end of June and continued through the Fourth of July holiday, daily gas burns reached nearly 40 Bcf/d. Meanwhile, the most recent weather forecasts show above-average temperatures for the rest of July for most of the country, with some of the hottest weather forecast for Texas.

Even without the help of Mother Nature, power demand has been “robust” on a weather-adjusted basis and is forecast to grow 2.2 Bcf/d this year, Barclays researchers said. With more than 40% of the y/y storage deficit in the South Central region, where demand growth is concentrated, “storage refills there should help put a bid under Henry Hub cash prices through October.”