Driven by coal-to-gas switching, natural gas demand growth in the Southeast is poised to “change the structure” of the region’s “market as we know it today,” according to Anupam Das, who manages market analytics for Juno Beach, FL-based wholesale electricity developer NextEra Energy Resources LLC. 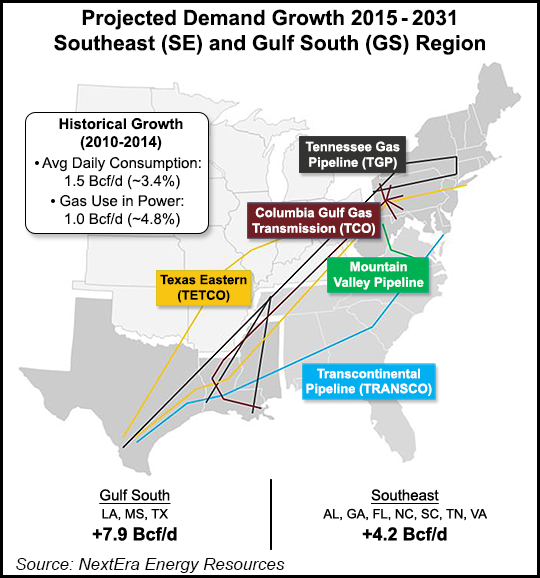 Looking at Alabama, Georgia, Florida, North Carolina, South Carolina, Tennessee and Virginia, Das told an audience last week at the 16th Annual LDC Gas Forums Southeast conference in Atlanta that average demand is expected to increase 4.2 Bcf/d over the next 15 years. While that figure on its own is “not very exciting,” the implications are significant for the region’s supply/demand balance, especially after accounting for the swing capacity needed during peak periods of power generation, he said.

“If you consider all these facts and put them together, you’ll realize that the natural gas market has been leaning on the coal generation stack to balance, or to soak up, excess supply, and that is exactly where we find ourselves today.”

The Southeast has led “the entire nation in the migration of generation from the coal stack to the gas stack.” By 2030, Das expects gas to account for 60% of the Southeast’s generation stack, with gas-fired plants “positioned to capture a large share of the market that is going to be abandoned by coal.”

Using projections from Wood Mackenzie Ltd., Das said electric generation by 2030 is going to add about 2.1 Bcf/d of additional demand in the Southeast during winter and 3.7 Bcf/d during summer. But the swing volume needed during peak seasonal demand periods could put stress on the region’s capacity, derived primarily through the Transcontinental Gas Pipe Line Co. LLC system (Transco), he said.

“The capacity planners in the Southeast region are probably more focused on peak day availability of gas considering the seasonal nature of the market, and if you add the fact that this region actually has no storage, no in-ground storage…except at the very west end of Alabama, the capacity planners have to rely on spare capacity coming into the region and applying to meet that huge swing in demand,” Das said.

The swing volume currently needed to meet demand in the region is about 4.9 Bcf/d, he said. “By 2030, we expect that to grow to about 5.8 Bcf/d. So we are going to have to find [an additional] 1 Bcf/d of swing capacity in a market that is essentially served by a single pipe.”

With the Southeast traditionally acquiring more than half its gas supply from the Gulf Coast, capacity planners will have “a very interesting time over the next 15 years” as Gulf supply routed to the Southeast market faces “competition from native demand growth,” which is projected to increase about 7.9 Bcf/d through 2031. “So you would quite possibly have to pay more to get your gas to the Southeast market…and that’s precisely why” NextEra is backing the Mountain Valley Pipeline (MVP).

The greenfield pipeline, which is to begin in Wetzel County, WV, is a joint venture between NextEra, EQT Midstream Partners LP, Con Edison Gas Midstream LLC, WGL Midstream, Vega Midstream MVP LLC and RGC Midstream LLC. MVP would be capable of transporting about 2 Bcf/d of supply from the Marcellus and Utica shales to an interconnect at Transco’s Zone 5 compressor station in Pittsylvania County, VA. MVP is currently under Federal Energy Regulatory Commission review and is targeting an in-service date in late 2018 (see Daily GPI, Oct. 23, 2015).

“We think…by having a different supply source, it will probably have very good economic benefits for consumers in this area, especially if you consider the fact that Gulf Coast prices may rise” under certain conditions, Das said.

As the supply/demand picture for the region takes shape in the next decade and a half, Das said it’s reasonable to expect that the cost to get gas to the Southeast from the Gulf in the future is “probably [going to be] higher than it is today.”