The United States had a total technically recoverable natural gas resource base of 2,515 Tcf at the end of 2014, the Potential Gas Committee (PGC) said, the highest resource evaluation in the committee’s 50-year history. 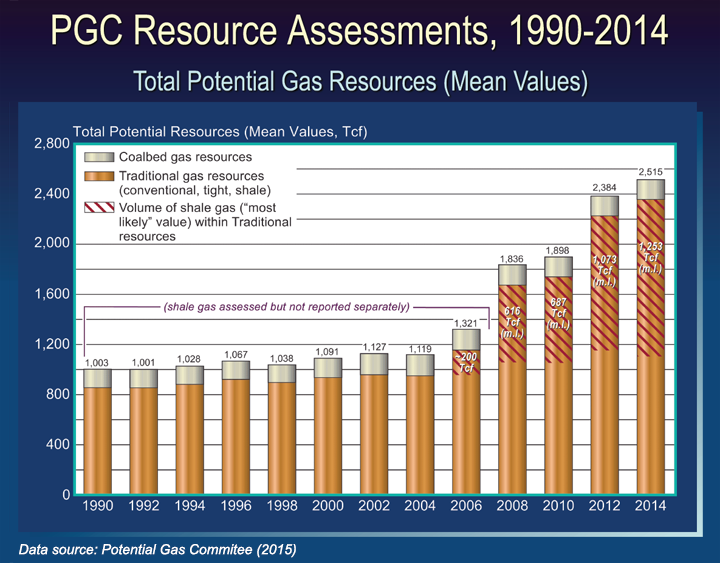 The new assessment, issued on Wednesday, found 2,357 Tcf of gas potentially recoverable from “traditional” reservoirs, including conventional, tight sands/carbonates and shales, as well as 158 Tcf in coalbed reservoirs.

The Atlantic area, anchored by the Appalachian Basin, ranked again as the country’s richest gas area with 35% of total U.S. traditional resources, followed by the Gulf Coast/Gulf of Mexico with 23%, Rocky Mountains at 18%, and the Midcontinent with 12.5%.

“The PGC’s year-end 2014 assessment reaffirms the committee’s conviction that abundant, recoverable natural gas resources exist within our borders, both onshore and offshore, and in all types of reservoirs — from conventional, tight and shales, to coals,” said Director John B. Curtis, professor emeritus of geology and geological engineering at the Colorado School of Mines.

“When the PGC’s assessments of technically recoverable resources are combined with the U.S. Department of Energy’s latest available determination of proved reserves, 338 Tcf (dry gas) as of year-end 2013, the United States has a total available future supply of 2,853 Tcf, an increase of 161 Tcf over the previous evaluation.”

The new assessment showed gains following a reevaluation of shale gas resources in the Atlantic, Midcontinent, Gulf region and Rocky Mountain areas, as well as conventional/tight gas resources in the Midcontinent and Rockies. The changes were assessed in addition to 53 Tcf of marketed gas production that was estimated by the U.S. Energy Information Administration for the period since the 2012 biennial assessment.

The PGC reports its findings of potential resources and future supply summarily on the national level, but the committee said “individual province-level assessment results” offer the most value for purposes of analysis, planning and exploration.

“Our knowledge of the geological endowment of technically recoverable gas continues to improve with each assessment,” Curtis said. “Furthermore, new and advanced exploration, well drilling, completion and stimulation technologies are allowing us increasingly better delineation of and access to domestic gas resources, especially unconventional gas, which, not all that long ago, were considered impractical or uneconomical to pursue.

Changes in the total assessment from 2012 to 2014 arose primarily from analyses of recent drilling, well test and production data from these four regions,” PGC said.

The largest volumetric and percentage gains were reported for Appalachian shales, primarily the Marcellus but also including the Utica and the newly assessed Rogersville Shale, which collectively rose by 137 Tcf (24%).

The Gulf Coast assessments were 15 Tcf, or 3% higher, reflecting “aggressive” development of wet gas and condensate in the Eagle Ford Shale in Texas and a first-time assessment for the Cretaceous Tuscaloosa Marine Shale in Louisiana.

The Midcontinent’s total assessment is 10% higher than two years ago with a gain of 26.9 Tcf. There was a “modest” decline for the Arkoma and Anadarko basins, which hold conventional reservoirs and shales, but those minor losses were offset by “substantially higher evaluations” for the granddaddy unconventional play, the Barnett Shale in the Fort Worth Basin, and the stacked pays in the Permian Basin’s Bone Spring and Wolfcamp plays.

A 9.6 Tcf (2.3%) net increase for the Rocky Mountain area followed a reevaluation of new data and drilling results from the Niobrara formation in Colorado, both the Cretaceous shale in the Piceance basin and the fractured-carbonate play in the Denver Basin.

“The growing importance of shale gas nationwide is substantiated by the fact that the PGC’s total assessed shale gas resource of 1,253 Tcf for 2014 accounts for approximately 61% of the country’s total traditional potential resources, up from 57% in 2012,” the committee noted.

The new biennial report commemorates the PGC’s 50th anniversary and includes a complete review of the national aggregated mean-value assessment statistics. There also is an area-by-area comparison of assessment results for year-end 2012 and 2014, and decennial changes in area-level assessments from 2004 to 2014.

The PGC reports the gas resource assessments in three categories of decreasing geological certainty: probable, possible and speculative. For each category, volumes are assessed as minimum, most likely and maximum in each of 90 onshore and offshore provinces in the Lower 48 states and Alaska. The 90 provinces are grouped into seven geographic assessment areas. Based on new exploration results, drilling and production information and various other data that become available, PGC members may reclassify resources from one category to another and to proved reserves.

The new assessment does not assume a time schedule or a specific market price to develop and produce future gas supplies, Curtis said.

“Assessments of the Potential Gas Committee represent our best understanding of the geological endowment of the technically recoverable natural gas resource of the United States,” he said.

The Colorado School of Mines’ Potential Gas Agency provides guidance and technical assistance to the PGC, an independent nonprofit that consists of volunteers who work in the gas exploration, production, transportation and distribution industries, as well as in the field/technical services and consulting sectors. The Potential Gas Agency receives financial support from exploration and production companies, gas pipeline companies and distributors, and individuals.