Potential natural gas reserves in the United States were an estimated 3,374 Tcf at the end of 2018, a record high, according to a biennial report conducted by the Potential Gas Committee (PGC). 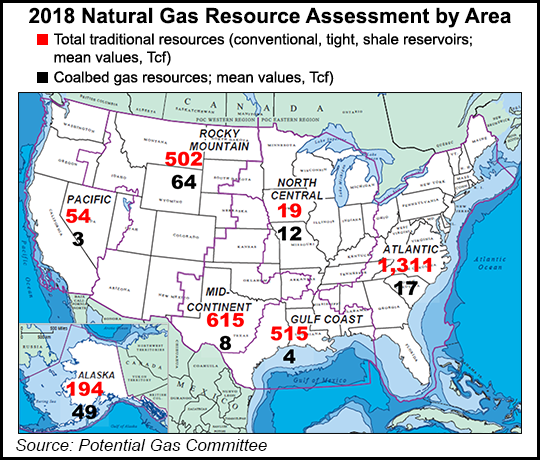 It was the highest resource evaluation in PGC’s 54-year history, and larger than the group’s 2016 assessment by about 20%, said the American Gas Association (AGA). The increase was due to reassessments of shale gas resources in the Northeast and Mid-Continent areas and conventional and tight gas in the Mid-Continent and Rocky Mountain areas.

“This report verifies that our nation has more natural gas than at any point in our history, ensuring that American families and businesses can rely on this clean, affordable source of energy for many generations,” said AGA CEO Karen Harbert. “The United States continues to set new natural gas supply records because of technological improvements and continued learning in gas exploration and production. Natural gas has transformed the American economy and energy future for the better. Any realistic plan to continue towards a cleaner energy future will have natural gas as a foundation.”

The U.S. Energy Information Administration (EIA) has estimated that proved gas reserves at the end of 2017 stood at 464 Tcf. That amount, combined with PGC’s assessments of technically recoverable resources, equals 3,838 Tcf of U.S. future supply of natural gas, a 22% increase over the previous evaluation.

“More well drilling and continuous improvements in completion and stimulation technologies lead to better delineation and characterization of U.S. gas resources, especially in shale and tight reservoirs,” said Alexei Milkov, director of the Colorado School of Mines’ Potential Gas Agency. “The record gas resources assessed by the PGC, in addition to record reserves and production reported by EIA, display a picture of strong supply of natural gas in the U.S. for many years to come.”

Changes in the total assessment from year-end 2016 to year-end 2018 arose primarily from the evaluation of recent drilling, well-test and production data from the country’s four richest resources areas. The largest volumetric gains (264 Tcf, or 25%) were reported in the Northeast.

“The major reason for the increase is new drilling and production results from Marcellus and Utica shale plays in the Appalachian basin,” PGC said.

The Gulf Coast area had a decrease of 22 Tcf (4%), due in large part to downsizing of the type well in the Eagle Ford play, and lack of resource additions to replace production from the Eagle Ford and Haynesville shale plays.