The upcoming U.S. elections are unlikely to junk bullish forecasts for natural gas and oil prices, with a potential “Blue Wave” that would usher in a Democratic-controlled government in fact a positive catalyst, according to energy analysts. 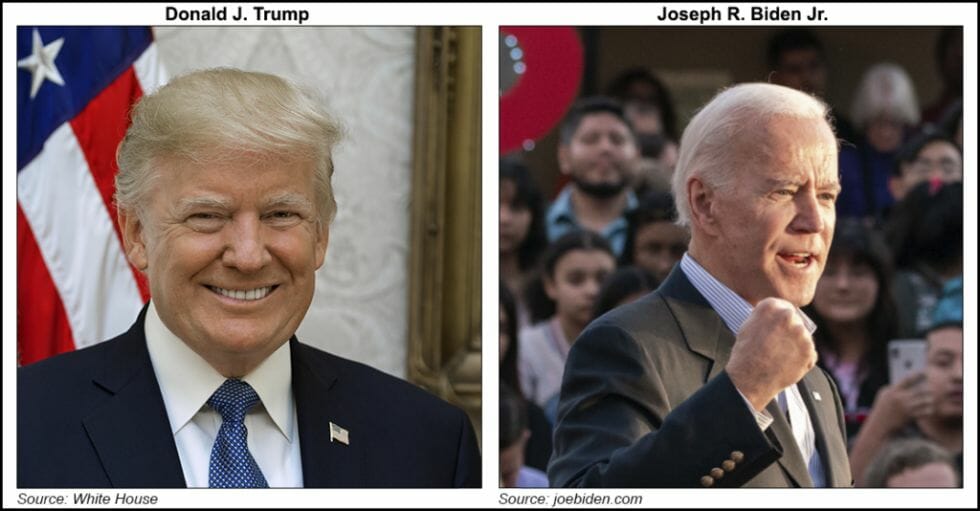 Goldman Sachs analysts laid out their view of the benefits of Democrat Joseph R. Biden Jr. toppling President Trump in November. The Republican-controlled Senate also appears to be headed for a reckoning, as Democrats look increasingly likely to take control of Congress in January.

“From a pure domestic regulatory perspective, a Biden election would…be bullish oil and gas prices as it would lead to a higher marginal cost of shale supply and higher hydrocarbon demand in coming years,” according to the Goldman team.

Goldman’s analyst team led by Damien Courvalin reiterated its bullish 2021 call for gas and oil, with the drivers of higher prices superseding potential outcomes of the elections.

“The recent gyration in oil prices, rallying on days of higher expected stimulus and weakening dollar, suggest that a Biden election and blue sweep could in fact prove a bullish catalyst for oil.

“While gas would likely rally as well, we already forecast a further rapid appreciation in prices in coming months given the lack of a U.S. gas producer response to high 2021 prices.”

The elevated oil inventories are going to still weigh on prices, but “rallies on days of positive stimulus news recently suggest that a Biden election could prove a short-term bullish catalyst for oil alongside further expected dollar depreciation,” said the analyst team.

Goldman’s bullish call remains for natural gas “because most policies currently proposed would increase the cost of shale supply and potentially reduce associated gas production if an Iran deal keeps oil prices below our constructive forecast.”

The outlook for oil prices also is positive “because low deferred prices already embed a full return of Iran in 2021 and sustained weak demand — both too pessimistic in our view — with the shale supply headwinds set to offset a return of Iran production longer term.”

Since taking over four years ago, the Trump administration has implemented policies that support domestic energy sectors. More federal land leases have been issued, and the administration has attempted to streamline the pipeline approval process and ease methane requirements for oil and gas operators.

Some state regulators also are stepping up oversight of the upstream sector “in key areas like Texas, Colorado and Alaska, and in the midstream sector.” For example, the Railroad Commission of Texas is pushing to reduce flaring/venting from wells, while Colorado is enacting more stringent oil and gas development rules.

Under a Biden administration, some U.S. oil and gas producers are certain to face headwinds. The former vice president has struck a centrist tone in his campaign and reiterated that his $2 trillion climate plan is less draconian than the ambitious Green New Deal advocated by some progressives.

However, Biden’s campaign statements suggest his administration could introduce regulations that would, among other things, increase the cost of Lower 48 production, with methane restriction and taxes potentially increasing costs by up to $5/bbl.

“Such policies would admittedly likely only be gradually implemented given the centrist positioning of Biden’s candidacy, their negative impacts on ‘blue’ states like New Mexico, the regressive nature of higher oil prices and the geopolitical flexibility that lower U.S. oil imports have allowed.”

A sweep of the presidency, House and Senate could allow incoming Democrats to increase federal oversight of U.S. onshore activity, but “regulatory measures require a high hurdle” with 60 votes needed to pass legislation in the Senate.

Rystad Energy’s Artem Abramov told NGI he also views Biden’s election as a positive. For example, Biden may end the U.S./China trade war and enact a “more protective Covid-19 policy.” Those moves alone would be a “positive for global macro and positive for oil consumption/prices, and hence, possibly improved economics for the U.S. oil producers in the short-term.”

However, uncertainty abounds about the future of oil and gas activity on federal land, Abramov said. The Permian Basin in New Mexico and the Powder River Basin of Wyoming, each with an abundance of federal land under lease, could be negatives for some producers.

However, there’s not likely to be an industry wide impact as “activity will migrate to private/state land,” Abramov said.

The economic consequences in the long-term for producers may follow more stringent environmental regulations, with a bigger impact on the smaller, private operators. The larger, public independents “are ahead of governmental environmental policies anyway amid the ESG pressure coming from the investor community.”

Under Biden, expect to see a “faster energy transition process in the U.S., fast-tracked penetration of renewable energy and faster replacement of coal in the power mix, but still a good market for gas producers regardless of who the president is,” Abramov said.

Evercore ISI, which has been conducting a weekly survey, said Tuesday that “expectations of clarity on the election are rising, as 76% see a clear winner on the presidential election within a week of election day.”

Nearly three-quarters of the respondents to the latest Evercore survey (73%) expect Biden to win, “the highest share we have seen.”

Most respondents, 57%, also see a Democratic sweep of the Senate, a complete reversal from late September, when 61% expected Republicans to hold the upper chamber of Congress.

Evercore analyst Sarah Bianchi reiterated that the election still could go either way.

“However, if the current polls hold up, there is an increasing chance of an overwhelming Democratic sweep that could bring in more Democratic senators,” Bianchi said. “A larger Democratic majority would clearly have important consequences in what Democrats could pass legislatively as they would have greater flexibility to lose a few Democrats on a vote.

“However, it would not greatly shift our expectations…of how far left the policies can go. Additional Democratic senators to widen the majority would come from conservative states and would not be likely to pass some of the more liberal Democratic ideas, such as the Green New Deal.”