A national organization charged with making recommendations for weights and measures standards is expected to decide this month whether natural gas fueling dispensers should use kilograms rather than gallons in measuring the amounts of fuel they distribute. 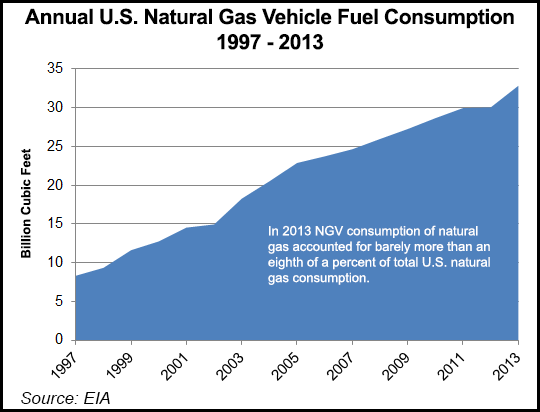 An AGA spokesperson told NGI that the trade associations are working “to raise awareness on this issue and to encourage policymakers to reject proposals for methods of sale for liquefied natural gas and compressed natural gas (CNG) other than the [diesel or gasoline] gallon equivalents (DGE or GGE).”

In a letter to U.S. Commerce Secretary Penny Pritzker, Reps. Lee Terry (R-NE) and John Larson (D-CT) said some state officials and representatives of the National Institute of Standards and Technology (NIST), which is guided by the NCWM’s recommendations, “do not support the DGE or GGE approach,” believing all NGV fuel retailers should use kilograms.

Noting that the current GGE system backed by the NCWM has been working for 20 years, Terry and Larson said that NGV fuel users “can easily compare gallons to gallons because CNG is sold in GGE units.”

U.S. Sens. John Thune (R-SD) and Amy Klobuchar (D-MN) have circulated a similar communication to their Senate colleagues, seeking supporters by Tuesday to join the effort to get Pritzker to reject a switch to kilograms.

“The reasonableness of using GGE or DGE units is underscored by the Department of Energy’s quarterly Clean Cities Alternative Fuel Price Report, which regularly compares the prices of various fuels, including CNG, in both GGE and DGE units,” Thune and Klobuchar said.

More than 50 U.S. House of Representatives signed the letter to Pritzker, and Thune and Klobuchar are looking for similar support from their colleagues, they said in a June 24 letter.

After its beginnings in the 19th century as an annual conference of state officials attempting to bring some national standards to the setting of weights and measures, which the U.S. Constitution leaves to states, the NCWM was created in 1905 as a not-for-profit corporation focused on ensuring that national standards keep pace with evolving technology and marketing practices.