“A change to the constitution is something everybody is thinking about but the road ahead looks a bit more complicated given the results of midterm elections,” David Crisostomo, associate director at IHS Markit and seasoned Mexico energy industry expert, told NGI’s Mexico Gas Price Index. 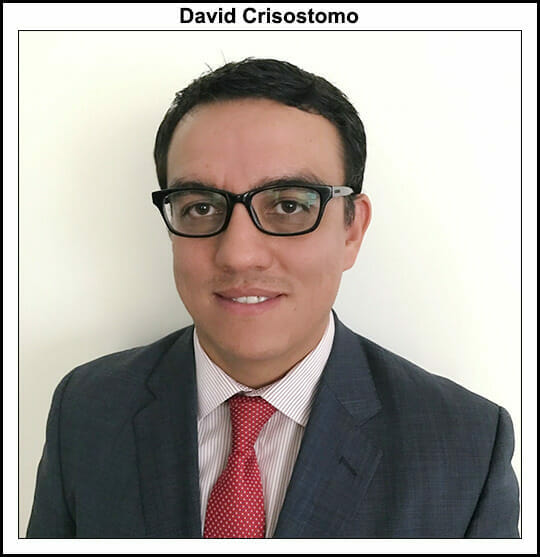 “The results of the midterm elections show that the room to seek constitutional changes has tightened, but that doesn’t necessarily mean we should not expect further changes to the energy sector, including those impacting the natural gas industry,” Crisostomo said.

Crisostomo has been an associate director at IHS Markit since 2018 and has worked with the company since 2011. Additionally, in 2014, he served as an advisor on the energy editorial board at Mexico City-based newspaper Reforma. Before joining IHS Markit, Crisostomo worked as a power generation analyst at Iberdrola SA in Madrid, Spain and spent three years as a project engineer at ABB Mexico SA.

NGI: There have been significant changes to the Mexican energy industry since 2018. What additional changes do you foresee in the industry in the next three years?

Crisostomo: I think the energy objectives won’t change much and the attention will continue to be on the role that Comisión Federal de Electricidad (CFE) and Petróleos Mexicanos (Pemex) should have in the energy sector. The recent revocation of the indefinite suspension to the power industry law will likely continue to draw the attention of the energy sector in the short to mid-term. It is yet to be seen how legally cumbersome the process will become considering there are a ton of other injunctions still favoring the stance of private generators and the original regulatory framework. A similar path could be expected to the changes to the Hydrocarbons Law.

NGI: In your opinion, how could the results of the June midterm elections affect the Mexican natural gas industry?

Crisostomo: The relevance of the midterm election’s results (when it comes to energy issues) was mainly to weigh the ability of the government to seek deeper legal changes in the second half of this administration. The results of the elections show that the room to seek constitutional changes has tightened, but that doesn’t necessarily mean we should not expect further changes to the energy sector, including those impacting the natural gas industry.

NGI: In recent weeks, President Andrés Manuel López Obrador has continued to reiterate his interest in an electricity reform that would strengthen the CFE so that it continues to be the dominant provider of electricity in the Mexican market. What are your thoughts on this initiative and do you think it will have the support in congress to be approved?

Crisostomo: We still need to see what kind of reform the government has in mind. The amendments done to the power industry law are an indication of what the main concerns of the government are when it comes to CFE’s role in the power sector, but the legal framework as it is today conflicts with those changes. A change to the constitution is something everybody is thinking about but the road ahead looks a bit more complicated given the results of midterm elections.

NGI: In June, reports indicated that Pemex is burning much larger amounts of natural gas — flaring — than in previous years, including burning 712MMcf/d in the first quarter of the year. At a time when Mexico imports the majority of its demand for natural gas, what does it signal that Pemex is burning such a large amount of the fuel on a daily basis?

Crisostomo: According to the Comisión Nacional de Hidrocarburos (CNH), yes, there is an increase of unused gas (gas no aprovechado in Spanish) in the first quarter of 2021 compared with previous years. In principle, there should be an economic or technical reason for this flaring to increase. The natural gas produced in different fields, in addition to meeting end-consumer demand, can be used for self-supply purposes on site either as fuel for production processes or to generate electricity. Also, there is re-injection for pumping. To better  understand the underlying reasons for the increase in flaring, one should look into these different factors.

NGI: In your opinion, what are the most pressing challenges in the Mexican natural gas industry currently?

Crisostomo: The Uri storm in February and its impacts to our main natural gas supplier, Texas, clearly exposed the vulnerability of the country to imports and import shortages. Developing both strategic and commercial storage is something that needs to happen shortly. We will likely keep seeing these kinds of climate-induced disruption events and we need to better prepare to cope with them. The good news is that Cenagas has included one storage project in its five-year development plan which I think is a step in the right direction.

Towards the long term, we need to think more about a comprehensive supply strategy. The world is rapidly changing and more countries are moving towards low carbon development plans, including the U.S. For Mexico, which imports over 65% of its natural gas needs from the U.S. and produces nearly 55% of its electricity with natural gas, it is something to keep in mind.

NGI: Where do you see the best growth opportunities for the Mexican natural gas industry in the next 3-5 years?

Crisostomo: I think a low-hanging fruit for the natural gas industry in Mexico is the enforcement of the regulatory framework. A lot of the elements needed to have a more dynamic gas and liquid gas market are already there and can definitely support a more rapid development of the industry.

I think the country has made significant strides in increasing the transportation capacity throughout the country and maximizing the value of such investments is something achievable in the timeframe you mention. Covid-19 had a big impact in global economies and Mexico was not exempt, so increasing access to cheap natural gas for different productive sectors of the country can give a boost to the Mexican economy.

Additionally, I think we need to keep an eye on the development of the Mexican west coast as a liquefied natural gas export platform to Asian markets. Despite the energy transition, there is plenty of room for natural gas in those markets which still have a large share of coal or oil-based fuel for electricity production.