Support for hydraulic fracturing (fracking) among New Yorkers remained unchanged overall, as a sharp increase in backing among suburbanites canceled out flagging support from Upstate voters, according to a Siena College Research Institute poll released Wednesday.

The most recent Siena poll, conducted Nov. 26-29, surveyed 822 likely voters who were registered to vote in New York. The poll has a margin of error of plus/minus 3.4%.

Some of the numbers from the latest poll were identical to one from October (see Shale Daily, Oct. 30). Respondents were asked if they supported efforts by the state Department of Environmental Conservation (DEC) to formulate rules governing high-volume fracking. Both polls showed a record high 42% support, a record low 36% opposed and a record low of 23% either having no opinion, didn’t know or didn’t have enough information.

But support appears to be shifting among the regions in the state. In the latest poll, suburbanites supported fracking by a 50-32% margin, a 6% increase from the October poll. Support also ticked 1% higher among New York City residents, who now back the practice by a 41-29% count.

Upstate voters now oppose fracking, 45%-39%, a 4% decrease in support from October, when they supported fracking by a 43-41% margin.

“This continues to be an issue where neither supporters nor opponents have made a strong enough case to rally a majority to their side,” said Siena pollster Steven Greenberg.

Other poll numbers were relatively unchanged from October. Fracking continued to enjoy support among Republicans (60-24%) and men (47-38%), while smaller margins of support were observed among independents (40%-39%) and women (39-34%). Only Democrats remained opposed (39-36%), but since October opposition has fallen 3% and support has grown by 2%. 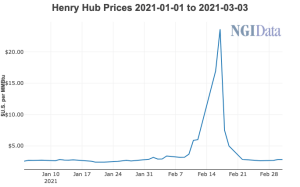 U.S. liquefied natural gas (LNG) exporters could see cargo cancellations return this summer if the current supply glut cannot be alleviated by then, analysts said Wednesday. The consultancy estimated 2020 saw a global surplus of around 24 million metric tons, or 6% of the available market, as demand weakened amid the coronavirus pandemic. This year,…