Despite recent action by the UK government to encourage unconventional natural gas extraction in England, a lasting domestic shale industry would need a dedicated supply chain and reliable support through changing political winds, according to prominent energy prognosticators. 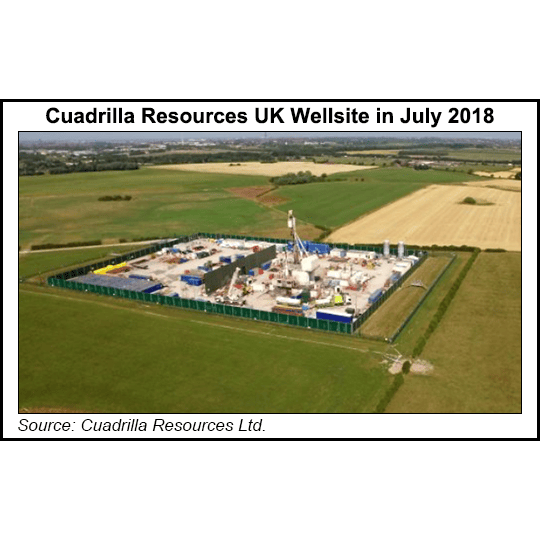 “I would just be shocked if anything could happen,” RBN Energy LLC CEO Rusty Braziel said last week during a webinar. “I mean, let’s face it, the entire European community has been totally paranoid about hydraulic fracturing for years and years now.”

Noting that the UK government “all of a sudden” dropped the moratorium on fracturing amid tight natural gas supplies, Braziel predicted that political pressure to reinstate the ban would likely grow “as soon as things get back to something that resembles normal…”

As a result, he expects exploration and production (E&P) companies to be reluctant to invest in shale drilling and fracturing operations that could be shut down by a new government.

He said “maybe someone’s got enough courage to do that. I sure wouldn’t.”

“It is also not easy for dedicated E&Ps to attract new capital to finance early stages of shale gas in the country these days,” he said. The investor community, particularly in Europe, “remains very decarbonization-focused despite” the current preoccupation with the short-term energy crisis.

A new supply chain would be needed to develop a lasting domestic shale gas industry in the UK, Kenneth Medlock III, senior director of the Center for Energy Studies at Rice University’s Baker Institute for Public Policy, told NGI.

“There is no shale infrastructure really to speak of,” he said.

Medlock explained that E&Ps need a steady supply pipeline of fracture sand, or proppant, as well as water to support shale operations.

To offset the rapid decline rates of shale wells, E&Ps and oilfield services companies rely on a veritable “manufacturing process” in which drilling rigs and fracturing fleets move from site to site, Medlock said.

“You have to do this…to maintain stable production,” he said. “The industry just needs to develop the supply chains to support that.”

Abramov said the decision by UK’s Truss to lift the moratorium “came as a surprise to the local supply chain, so it will take some time to get up to speed.”

He predicted it would “take at least two to three years to reach the scale needed to support full-scale development and get meaningful commercial” production volumes of shale gas.

“Both onshore gas and oil is produced although nowhere near the levels of offshore UK oil and gas production,” he said.

“As well as Wytch Farm, production is found in southern England, the East Midlands and Yorkshire,” Aron said. “Exploration activity is currently at a low level.”

Shale gas initially would be produced from Cuadrilla Resources Ltd.’s two existing Preston New Road wells in northwestern England, he said. Aron added that fracturing equipment would be needed and could take six months to mobilize.

“Cuadrilla has planning permission to drill up to two further exploration wells at Preston New Road,” he said.

Based on rig availability, drilling the next two Preston New Road shale gas wells could start in nine months to a year, Aron predicted.

“Completion operation on the two existing Preston New Road wells would require the preparation and agreement of a field development plan as well as local planning approval of the development,” he said. “This is likely to involve connection to the local gas grid and would require some surface production facilities as well as a connecting pipeline. Design work and the approvals would probably take 18-24 months.”