It was a week of all positives for NGI’s weekly spot gas prices as every market point registered gains, from as little as a quarter to as much as $70 for the week ended Jan. 24. Nationally prices rose $3.58 to average $8.17, but there was a wide variance. The onslaught of Polar Vortex II made sure the Northeast experienced the greatest advances with several points making double-digit dollar gains and new record highs recorded with some points in and around New York City registering high trades from $125 to $140. 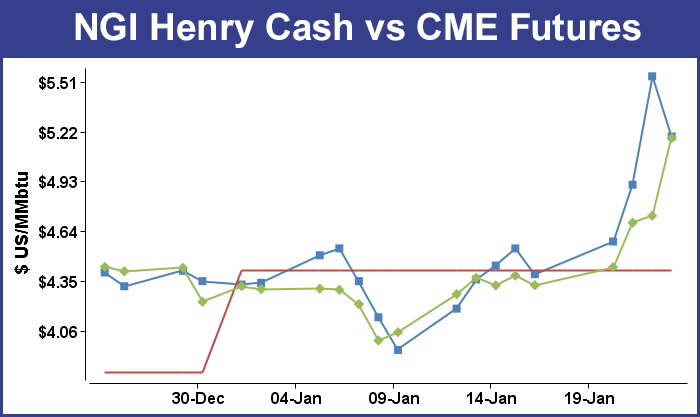 Surging prices are likely to continue as meteorologists are calling for a continuation of conditions in the Mid-Atlantic and Midwest prompted by the polar vortex. AccuWeather.com meteorologist Alex Sosnowski said that New York City could expect “Blasts of cold air and episodes of snow [continuing] through the end of the month. A large Alberta Clipper storm passing by to the north this weekend can bring a period or two of accumulating snow on Saturday, followed by a return of cold air Saturday night. Another Alberta Clipper may visit the area during Monday with a chance of snow and another brief warmup, [but] the air following the Monday clipper could rival the coldest of the season so far.”

Generally the farther removed from the Northeast the more modest the weekly gains. Rocky Mountain points rose by 42 cents to average $4.76 and South Texas and East Texas rose 63 cents and 64 cents, respectively to $4.89 and $4.93.

February futures vaulted 85.6 cents during the week to pierce the $5 gas barrier and close at $5.182. The Energy Information Administration reported a withdrawal from storage Thursday of 107 Bcf for the week ending Jan. 17. The 107 Bcf was about in line with market expectations, and a futures market that screamed higher on the open by more than 25 cents on continued supportive weather outlooks Thursday saw little impact from the report and continued to work its way lower settling just a few pennies higher. At the close February futures added 4.1 cents to $4.730 after trading as high as $4.947.

Given the tsunami-like impact of recent cold weather, Thursday’s Energy Information Administration storage report seemed almost a nonevent. Expectations for the week ended Jan. 17 were for a below-average withdrawal. Last year 168 Bcf was withdrawn and the five-year average stands at 181 Bcf. Analysts were expecting a pull of around 100 Bcf to be reported.

IAF Advisors of Houston was looking for a withdrawal of 101 Bcf, and Bentek Energy calculated a pull of 94 Bcf using its flow model. A Reuters poll of 23 traders and analysts revealed an average 110 Bcf with a range of 90-150 Bcf. Energy Metro Desk‘s survey showed an average 103 Bcf and after missing last week’s 287 Bcf by a country mile, John Sodergreen, the editor, said “in the end, we think that the bias is heading to the low side of the -103 Bcf Consensus’ final tally.”

The actual 107 Bcf didn’t catch many off guard. “There was no surprise here, and the market should quickly revert to trading off the current and forecast cold,” said Tim Evans of Citi Futures Perspective.

Inventories now stand at 2,423 Bcf and are 598 Bcf less than last year and 369 Bcf below the 5-year average. In the East Region 67 Bcf were withdrawn and in the West Region 15 Bcf were pulled. Inventories in the Producing Region fell by 25 Bcf.

The Producing region salt cavern storage figure grew by 2 Bcf from the previous week to 213 Bcf, while the non-salt cavern figure fell by 27 Bcf to 674 Bcf.

In Friday’s trading spot natural gas for weekend and Monday delivery posted stout gains, but there was a wide variation of prices in that mix. Metropolitan areas such as New York, Boston, Philadelphia and Chicago all reported hefty gains, some in the double-digit dollar category, but market points in producing regions generally lost a quarter or more. Philadelphia and Boston led the day’s advance, but the New York area was not far behind. Futures rocketed higher, posting the highest close in three and a half years as traders continue to factor in persistent cold and uncertainty regarding season ending supplies. At the close, February had added 45.2 cents to $5.182 and March was up 41.9 cents to $4.998.

Futures traders are at a loss for words. “I don’t know where we go from here. It’s just one of those calls since no one wants to pick a top and no one is making any offers, “said a New York floor trader. “I don’t know if we’ll get some more cold forecasts, but $5.75 is not out of reach.”

A lot of market angst is centered around how low can season-ending storage go before the arduous process of refilling begins. One school of thought has it that U.S. natural gas storage could fall to 1.2 Tcf by the end of withdrawal season. The last time ending inventories reached that level was March 2008 at 1,266 Bcf. Spot futures March 31, 2008 settled at $10.101.

Stephen Smith, who shares storage and pricing insight through Stephen Smith Energy Associates, talked with NGI on Friday about a new storage model he ran earlier in the day. The numbers, like the weather, “keep changing quickly,” he said.

“Basically, we thought that this polar vortex business would last through the end of January,” Smith said. The National Weather Service [NWS] “not too long ago was predicting that February would be milder than normal…But other forecasters now say February is looking colder than normal.”

Analysts see increased risk going into the weekend as temperature forecasts can often shift dramatically. “The market’s ability to snap back up into fresh territory overnight following [Thursday’s] post-EIA pullback of as much as 26 cents attests to the voracity of this weather induced price spike,” said Jim Ritterbusch of Ritterbusch and Associates in a morning note to clients. “But with the market virtually attaining the psychologically important $5 mark, maintaining buying interest today could be challenged by pre-weekend profit-taking that will force some wide price swings.

“Temperature forecasts can change dramatically over a weekend, as has been seen on several occasions in recent months, and as a result existing longs will be looking for reasons to accept at least partial profits in today’s trade. We are viewing yesterday’s lows as near-term support and would not rule out a quick return to this area within the next couple of sessions.”

New England prices surged for weekend and Monday packages as buyers uncertain of weekend needs in light of extreme weather conditions locked in supplies. According to the National Weather Service in Southeast Massachusetts, conditions would be “cold and dry towards Midnight…[with] temperatures moderating warmer thereafter. Disturbance for Saturday with light snow and strong south-southwest winds. Another surge of Artic air to the rear. A fast-moving Alberta clipper brings light snow Sunday night and Monday followed by more chilly air. High pressure brings dry weather for much of the week.”

Stretching further out Joe Bastardi of WeatherBELL Analytics sees, “The severe cold shot next week is every bit the crisis of cold as advertised. The problem after that is the threat of another major shot, almost December style, coming out of the West with more penetration south in the 11-15 day period. I am watching the SOI [Southern Oscillation Index] because a sudden drop would probably let loose that hound. Remember, before the December outbreak there was a drop going on. As I said, that can be like a cattle prod to the pattern. There has been virtually no MJO [Madden Julian Oscillation] connection to the pattern as we are in what is normally a warm phase, as the north Pacific warm pool runs rampant in its influence. However, changes where water is 80 degrees will trump changes where it is in the 40s, even with the kind of anomaly there.”

Buyers looked to be more concerned with the bigger weather picture as temperatures in New England were expected to rise into the weekend but drop by Tuesday. Forecaster Wunderground.com predicted the high in Boston Friday of 18 would rise to 38 Saturday, make it to 36 on Monday before sliding to 18 again on Tuesday. Hartford, CT’s 25 high on Friday was anticipated to make it to 31 Saturday, 34 on Monday and drop to 18 on Tuesday. The normal high in Boston this time of year is 36 and Hartford is 35.

Well freeze-offs appeared to be less of a problem. In a report, industry consultant Genscape said Friday’s freeze-offs totaled 932 MMcf, down from Thursday’s 1,513 MMcf and Wednesday’s 964 MMcf. Friday’s hardest-hit areas were NE Pennsylvania at 307 MMcf, West Virginia 205 MMcf and Ohio at 123 MMcf.

Analysts at Genscape see a fundamental shift in New England demand. “During the recent cold snap, Algonquin Citygate prices blew out to last winter’s levels. The magnitude of the past two winters’ blowouts are much greater than that seen in the previous four winters. While it was cold (record cold in fact) the temperature deviations during the recent cold spike weren’t necessarily extreme. The same is true with temperatures during last winter’s price spikes; while low they didn’t reach unprecedented levels. However, we have observed the increase in citygate demand in relations to temperature,” the company said in a morning report.

Algonquin Citygate prices are certainly behaving differently. The gains in prices do not seem correlative to the admittedly much colder temperatures. According to NGI data, Algonquin Citygates dropped more than $40 Thursday to $34.17, but that followed a posting Wednesday of $78.30.

“Despite — or because of — this shift, however, gas prices are reacting differently this and last winter than versus the same temperature and demand levels of previous winters. The New England market is paying progressively higher prices for gas at the same temperature and demand levels as previous years. This echoes our statements earlier in the winter that LDCs are not sensitive to prices and instead more focused on reliability of natural gas deliveries.”