Natural gas futures bounced around Wednesday after weather models added a large chunk of demand to the long-range outlook, with frigid Canadian air forecast to plunge into the Lower 48 next week. After a sharp rally overnight lost momentum, confirmation in the midday data sent the January Nymex gas futures contract roaring higher and ultimately to a $5.723/MMBtu settlement. February futures shot up 23.9 cents to $5.617. 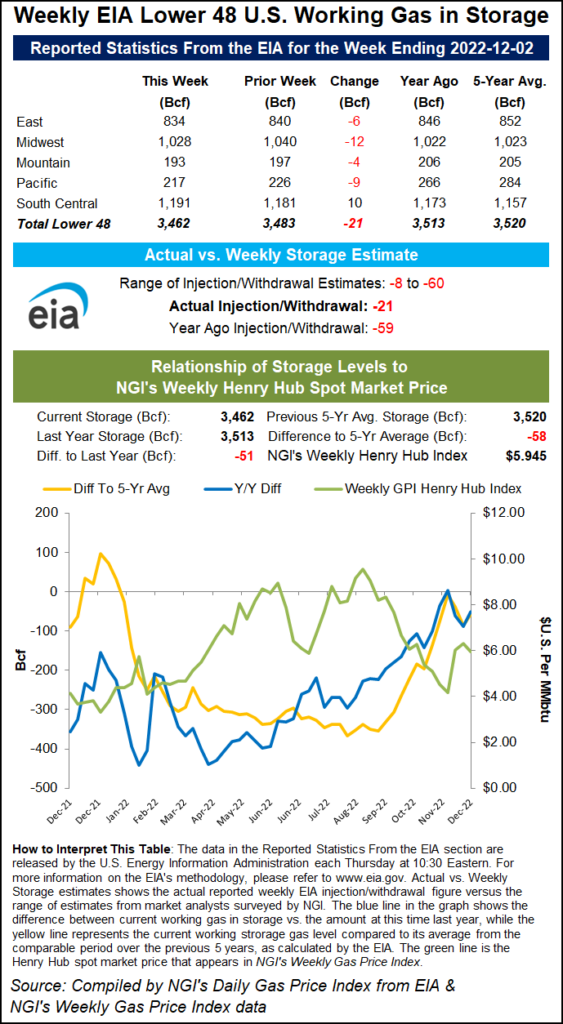 Spot gas prices were sharply higher out West, fueled by another round of bitter cold and snow. NGI’s Spot Gas National Avg. climbed 73.5 cents to $6.540.

After falling for four straight sessions, futures rebounded overnight after both the Global Forecast System (GFS) and European Centre models reversed and trended 15-20 heating degree days (HDD) colder. Although a revision was largely expected by traders, the amount of demand added back into the outlook likely was more than the natural gas markets were expecting, according to NatGasWeather.

The forecaster cautioned that after multiple instances in which the temperature outlook trended warmer after once being significantly colder, the market appeared to be cautious in not giving the latest models too much credit.

Still, when the midday GFS failed to back off the chillier forecast, traders hit the gas pedal and never looked back. After trading wrapped for Wednesday’s session, the late-day European model run also maintained the colder pattern, and even added HDDs to the outlook.

The latest data showed overnight lows plunging below zero across most of the northern half of the country during the Dec. 16-21 period. The southern United States also could see overnight temperatures slide into the 20s and 30s.

This is notable, considering daytime highs on Tuesday in Houston reached 85 degrees, breaking the previous record of 81 set in 1999, according to local forecaster Space City Weather. Even more shocking, it snowed on the same day in 2017.

Despite the increased likelihood of a mid-December cold snap, the damage done to prices from a much warmer-than-normal pattern in the first half of the month is significant, according to NatGasWeather. The prompt-month futures contract has shed $2 in about a week’s time.

At the same time, the span of mild weather and resulting light demand is seen padding storage inventories before the peak winter months, which could limit a price rally. After falling more than 350 Bcf below the five-year average at the end of summer, stocks are poised to flip back to a surplus in the next couple of weeks, the forecaster said.

Ahead of Thursday’s Energy Information Administration (EIA) weekly inventory report, storage withdrawal estimates pointed to a paltry draw anywhere from 8 Bcf to 60 Bcf for the week ending Dec. 2. To put this into perspective, the EIA recorded a 59 Bcf decrease in storage during the similar week last year and the five-year-average decline of 49 Bcf.

A Wall Street Journal survey of 14 analysts averaged a withdrawal of 30 Bcf. A Bloomberg survey showed estimates as low as 8 Bcf with a median of 31 Bcf, while Reuters’ poll produced a median 27 Bcf withdrawal. NGI modeled a 25 Bcf decline in stocks.

As of Nov. 25, total working gas in storage stood at 3,483 Bcf, which was 89 Bcf below year-earlier levels and 86 Bcf below the five-year average.

Aside from the warmth that’s helped to lower demand, analysts point to robust production that has aided the steady improvement in supplies. Lower 48 dry gas output has hit 102 Bcf/d in recent months, with most daily declines chalked up to maintenance events rather than a structural shift in production.

On Wednesday, for example, El Paso Natural Gas Pipeline (EPNG) declared a force majeure at two constraint points along its system. This was on top of the work already underway downstream on Line 1600.

Heading into Thursday’s trading session, all eyes are likely to be on whether models hold onto the HDDs in the forecast. If they do, there’s potential for bulls to try to squeeze bears to $6, NatGasWeather said.

Another round of wintry weather was heading toward the West Coast, propelling already lofty spot gas prices even higher.

Gains were stout across the Desert Southwest and into the Rockies, with prices soaring to $22.50 at Northwest Sumas amid heightened gas demand.

The National Weather Service said the next Pacific system arriving along the West Coast was on track to spread low elevation rainfall and heavy high elevation snows to the Pacific Northwest into Central California beginning overnight Wednesday. Moderate to locally major potential winter storm impacts in elevation over the Olympics and Cascades were possible through Friday, where snowfall accumulations in excess of one foot could fall. A slew of winter weather advisories were in effect over the Cascades through early Friday, according to NWS.

Northeast cash prices also strengthened ahead of late-week snow heading to the region, but gains were muted compared with those on the West Coast. Algonquin Citygate next-day gas picked up 89.0 cents on the day to average $4.900, and Transco Zone 6 NY rose 51.5 cents to $4.460.