Poland’s state-owned natural gas company has signaled its intent to terminate pipeline imports from Russia’s Gazprom in the coming years, as supplies from other sources have grown, particularly liquefied natural gas (LNG) from Qatar, the United States and other countries. 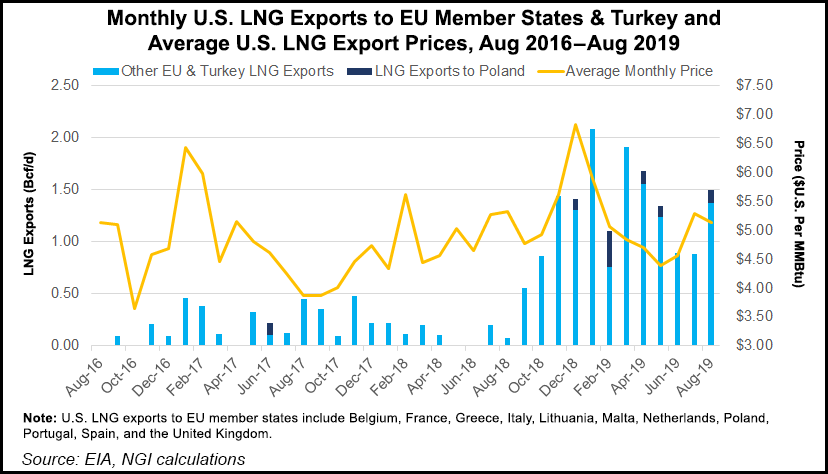 Polskie Gornictwo Naftowe i Gazownictwo SA (PGNiG) said last week the supply agreement with Gazprom, known as the Yamal contract, will expire on Dec. 31, 2022, at which point it does not intend to renew the agreement.

Noting that PGNiG has “taken a number of important steps to diversify the sources of natural gas supply to Poland,” management board President Piotr Wozniak said the decision to end imports from Gazprom aligns with an “aspiration to achieve security of energy supplies.”

For years, the state-owned company has been working to build an alternative long-term portfolio beyond Russian supplies, which have come at steep costs. The Yamal contract was signed in 1996 and its take-or-pay clause obligates PGNiG to take 85% of the contracted volumes regardless of whether they’re needed until the end of 2022.

In recent years, the company has signed a major agreement with Qatargas to increase LNG imports. PGNiG also has inked deals with Cheniere Energy Inc., Sempra Energy and Venture Global LNG to take volumes from proposed and existing export terminals along the Gulf Coast.

In July, Poland took its first deliveries of LNG under the long-term sale and purchase agreement signed with Cheniere last year. At the time, Wozniak noted that PGNiG’s portfolio of contracts with U.S. suppliers covers more than 9 billion cubic meters (Bcm), or about 317 Bcf, which is more than the country now imports from Russia.

A day before it announced that it would terminate the Gazprom contract, PGNiG said LNG import volumes this year through September were 27% higher year/year, reaching 2.48 Bcm (87.6 Bcf) after regasification. LNG accounted for about 23% of Poland’s gas imports, compared with about 18% in the year-ago period.

PGNiG said it has received 22 LNG deliveries since the beginning of the year, versus 16 cargoes over the same period of 2018. Meanwhile, Russian gas imports fell by 21% to 6.29 Bcm (222 Bcf) through the first nine months of the year.

Beyond an effort to curb Russian influence on European energy supplies, PGNiG has questioned the terms of the Gazprom contract and the high price required to be paid for natural gas.

In addition to its LNG portfolio expansion, the company plans to supply the Polish market with gas produced on the Norwegian Continental Shelf, following the late 2022 launch of the 140-mile, 967 MMcf/d Baltic Pipe interconnection through the North Sea, Denmark and the Baltic Sea.

Mexico natural gas prices jumped to $3.74/MMBtu in May compared to April prices of $3.38 and year-ago prices of $2.37, according to the latest IPGN monthly index published by the Comisión Reguladora de Energía (CRE). The May prices were the highest monthly prices reported in Mexico in the last 12 months, with the exception of…