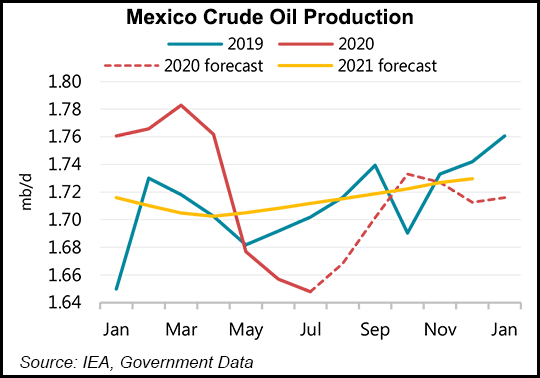 Production in Mexico “has also been supported by the Mizton field as well as Ayatsil, Balam and Xanab,” the global energy watchdog said. “Output is expected to recover from August, with overall production set to remain relatively steady both in 2020 and 2021 at around 1.7 million b/d.”

The Mizton field is part of the Area 1 offshore block operated by Italian major Eni SpA.

President Andrés Manuel López Obrador has pledged to reverse years of declining oil production through accelerated development of the priority fields, although results so far have been largely disappointing.

Analysts have warned that most of these fields are unlikely to generate value for the state-owned producer, given the global oil market’s current conditions and outlook.

KMZ and Xanab, meanwhile, are among the company’s most profitable producing assets, according to Welligence Energy Analytics. Pemex reported average production costs of $10.37/boe at KMZ as of end-2019.

Although often referred to as a single mega-asset, KMZ comprises the three distinct fields Ku, Maloob and Zaap.

He added, “So I’d say regardless of their declining outlook, they are still a key asset within their portfolio.”

As part of his bid to ‘make Pemex great again,’ López Obrador has stressed his belief that Mexico become self-sufficient in oil refining in order to cease imports of refined products from the United States and elsewhere.

July showed the difficulty of this goal, as Mexican refinery throughputs fell for a third consecutive month, with utilization rates dropping to 32%, compared to 76% in the United States, IEA researchers said.

“The largest operating refineries faced a full spectrum of issues this summer: a strong earthquake forced the shutdown of the Salina Cruz refinery; fire occurred during maintenance at the Cadereyta plant, and the Tula refinery halted crude processing due to storage bottlenecks for unwanted high sulphur fuel oil,” the IEA team said. “Government budget plans for next year include continued funding of $330 million for maintenance work at currently operating refineries and $2.1 billion for the new Dos Bocas site.”

In a recently published analysis, the Instituto Mexicano para la Competitividad, aka IMCO, implored Pemex to shift its limited capital resources from the loss-making refining segment to the more profitable business line of exploration and production.

The government’s Instituto Mexicano del Petróleo (IMP) last week issued a call for bids to conduct a diagnostic assessment of the controversial Dos Bocas refinery under construction in the president’s home state of Tabasco.

IEA on Tuesday also reduced for the second consecutive month its outlook for oil demand, with the watchdog warning that Covid-19 may play havoc with consumption into 2021.

Researchers said a resurgence of Covid-19 cases in many countries, lockdown measures, continued teleworking and the weak aviation sector have led to a revision to demand for the second half of 2020.

“The uncertainty created by Covid-19 shows little sign of abating,” IEA researchers said. “In Europe, the number of new cases has risen as the holiday season ends, though the rate of hospitalizations and deaths is lower than seen earlier this year. Case numbers in the United States are falling, and the situation seems to be improving in Japan and Korea.

“However, in various places, the situation is worrying and we are seeing localized lockdowns,” said researchers. “These developments weigh heavily on economic activity and lead to lower expectations for a recovery in energy demand. Home working reduces demand, but fear of using public transport is leading many workers to use personal vehicles. Factoring these unprecedented developments into conventional analysis is very challenging, to say the least.

Global oil demand from January to July was an estimated 10.5 million b/d below last year’s level, based on new IEA data. As national lockdowns eased, there was an initial recovery in demand led by gasoline, “but the curve has flattened out and it is becoming increasingly apparent that Covid-19 will stay with us for some time.”

IEA has reduced its estimate for global oil demand growth in the second half of this year by 0.4 million b/d. For 2020, the decline in demand versus 2019 is estimated at 8.4 million b/d, slightly deeper than IEA had forecast in August.

“At 91.7 million b/d, demand has returned to its level in 2013,” said IEA researchers. “With global output increasing overall, plus our downwardly revised demand data, we now calculate implied stock draws in the second half of the year at about 3.4 million b/d, nearly 1 million b/d less than estimated in last month’s report.”

With winter approaching in the Northern Hemisphere, said the IEA team, “we will enter uncharted territory regarding the virulence of Covid-19. In last month’s report, we said that the market was in a state of ‘delicate re-balancing.’ One month later, the outlook appears even more fragile.”