With industry, a U.S. senator and North Dakota state officials all focused on robust permitting applications for oil and natural gas development in the Bakken Shale, a new collaboration of federal agencies, the Bakken Federal Executives Group, is the latest attempt to streamline federal processes that are criticized for being too slow. 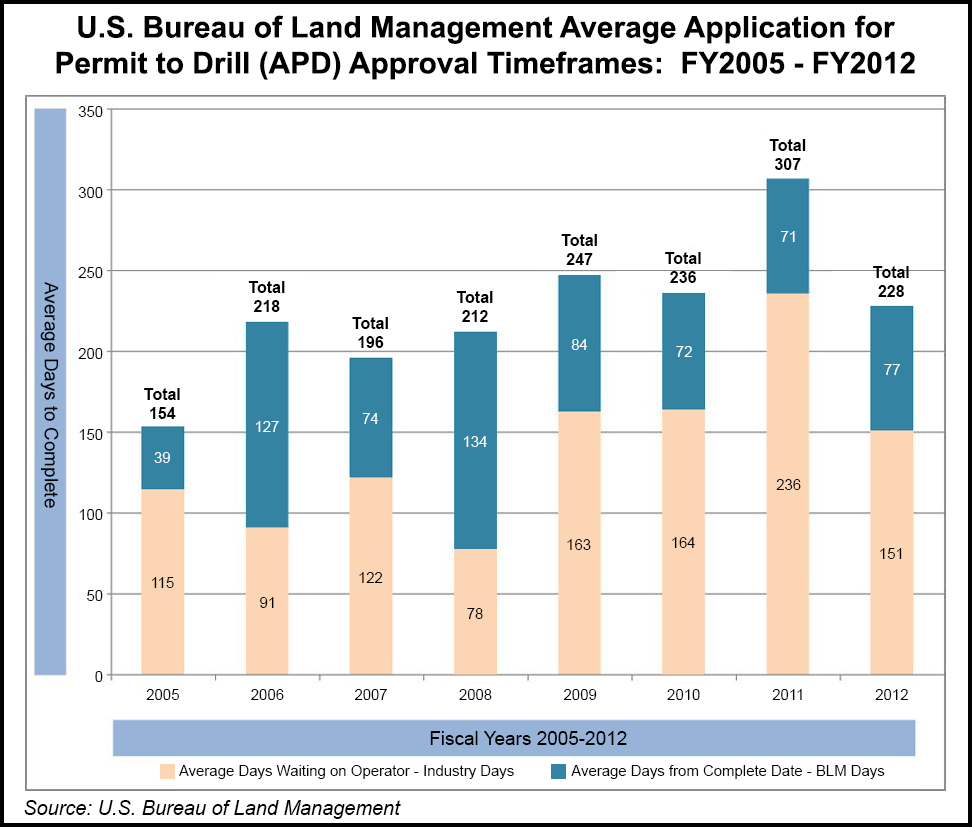 As an offshoot of discussions earlier between U.S. Sen. John Hoeven (R-ND) and the Obama administration and the year-old presidential executive order (No. 13604) to improve federal permitting and review of infrastructure projects, the new group of executives heading a dozen federal agencies with responsibilities in the Bakken is on the spot to make headway. They met for the first time in June in Montana.

State officials claimed permit approvals taking 10-14 days on state lands take anywhere from 180 to 210 days on federal Bureau of Land Management (BLM)-managed lands. A state Department of Mineral Resources (DMR) source said it takes 20-30 days for a state permit on average, and six months for one on federal or reservation lands.

In April 2012, then-Interior Secretary Ken Salazar used a Bakken oilfield as the backdrop for an announcement that he was rolling out new federal government efforts to streamline onshore leasing and drilling processes on federal lands (see Shale Daily, April 4, 2012). Earlier this year, President Obama reiterated his desire to cut red tape to speed up the permitting process for new oil and gas permits on public lands (see Shale Daily, Feb. 14).

The new federal executives group has conceded that oil and gas development in the Bakken has been growing rapidly during the past five years, “creating a number of workforce and regulatory issues. The booming economy in the region has driven up wages and the cost of housing, making it difficult for federal agencies to staff up to the levels needed to address the increasing workload,” a spokesperson said.

According to the Interior Department, in 2012 the BLM approved 664 drilling permits with 246 of those on federal mineral leases and 418 on Native American mineral leases. Since 2007, drilling permit applications on the Fort Berthold Indian Reservation have increased from zero to more than 400. About 900 permit applications are anticipated this year.

The BLM is also responsible for site inspection and enforcement of production accountability for royalty collection, workloads that have increased as development increased. Federal royalties collected in North Dakota totaled nearly $138 million in fiscal 2012. In five years, royalties paid on Indian wells have gone from less than $1 million to more than $257 million in fiscal year 2012.

North Dakota’s DMR so far has not had any interaction with the newly formed Bakken federal agency group, but it expects to have in the near future, a DMR spokesperson told NGI‘s Shale Daily on Monday.

“The group was established by President Obama and it is setting up a commission; they met once so far in Montana,” said the DMR spokesperson. “They have not worked with our office yet, but it is being discussed. Nothing formal has been established yet.”

An official with the North Dakota Petroleum Council told NGI’sShale Daily that permitting on federal lands continues to be an issue of concern to its members, and the council was looking forward to meeting with the federal executive group, but it had not done so at this time.

After lobbying the president personally on behalf of TransCanada Corp.’s northern portion of its Keystone XL oil pipeline proposal, Hoeven told local news media there was too much red tape and regulation “holding up the U.S. economy,” and the nation needs a faster permitting process. “There’s too much regulation across the board,” said the North Dakota senator as quoted in the Williston Herald.

Hoeven said the new group’s first meeting was a step forward in streamlining the federal permitting backlog. U.S. Department of Interior officials said the department is working to implement the Obama executive order from last year that calls for a more “efficient and responsive” permitting process on federal lands.

Regardless of the slower pace on federal lands, the Bakken oil and gas production, along with permitting, has been growing at a robust pace for more than two years now (see Shale Daily, June 17).

“The group’s work in collaboratively addressing common obstacles associated with the Bakken energy boom in western North Dakota is also closely aligned with the principles identified in the president’s memorandum of May 17 on infrastructure review,” a spokesperson for the newly formed group said. In his latest memorandum, the president reiterated the March 2012 executive order and its call for “modernizing” the federal review of infrastructure projects.

Interior Deputy Secretary David Hayes, who participated in the Montana meeting earlier in June, said that by coordinating across the many federal agencies involved in the Bakken region — as well as with state, tribal, and local governments and with stakeholders — “we are able to offer a better process for industry while also arriving at better outcomes for communities and the environment.”