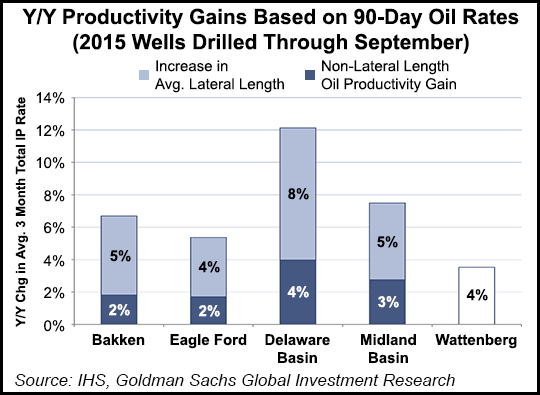 Analysts published an in-depth review about the productivity of wells drilled last year versus 2014 in the Permian’s sub-basins, the Bakken Shale in North Dakota, the Eagle Ford Shale in Texas and Colorado’s Denver-Julesburg (DJ) Basin/Wattenberg formation. Not included were Oklahoma’s stacked reservoirs, where data is insufficient. Data was supplied by IHS Inc.

Goldman’s team had expected to see productivity gains that were 3-10% higher overall than in 2014, and the forecast was about on the nose. But what analysts also wanted to determine were the drivers — whether they were temporary or would last. Increased horizontal lateral lengths were responsible for an estimated 2-4% of year/year (y/y) productivity gains for wells reviewed from January through September.

Are increased laterals the standard for more production from shale wells going forward?

“We believe we will see incrementally less of this in coming years, while seeing greater contribution from ‘quality’ drivers,” said analyst Brian Singer and his colleagues. These “quality” drivers include targeting/optimizing, where the horizontal lateral is landed within a zone and fracture stimulation density is increased, both of which should improve well economics and increase recovery of oil and natural gas in place.

“Despite the 2015 downturn, technological advances in shale continue,” Singer said. “Our well-level analysis of the Permian, Eagle Ford, Wattenberg and Bakken Shale plays suggests that even in a year of distress, there were productivity gains to be found across the various plays.”

The productivity gains were categorized into different buckets. Gains defined as “secular,” i.e. increases in average lateral length/non-lateral length and oil productivity, were roughly 7% higher on average y/y in 2015.

Based on the data, the Permian’s Delaware sub-basin had the largest secular gain at 12% y/y, but the Bakken (7%) and Eagle Ford (6%) also were above expectations. But — and it’s a big one — not all of the gains made by producers are considered sustainable.

“Non-secular” factors, such as natural gas capture and high-grading in individual plays, also boosted productivity, although that uplift may not continue. For example, 9% of the Midland sub-basin’s 17% y/y productivity gain “was a result of a shift from noncore to core acreage,” Singer said.

Still, there’s a lot to like about the massive legacy formation.

“Throughout the oil price downturn, producers with Permian assets have tended to favor their resource in this play, emphasizing the Permian’s superior productivity improvements and ongoing optimizations,” said Singer. “Going forward, we believe the potential for commercial development of multiple zones (multi-zone potential) puts the Permian in a unique position, and we see room for our Permian resource estimates to rise.”

And there was positive news for the Eagle Ford, with three-month initial production rates increasing y/y by 6% in the core areas and 4% outside the core. After adjusting for lateral lengths, core county productivity increased 9% y/y with noncore only decreasing by 2%.

A lot of press has been devoted to the sharp drilling downturn in the Eagle Ford. But Goldman’s team said there are reasons besides a lack of resources. Portfolio diversification by some of the largest producers is underway but for most of them, the Eagle Ford is but one of many of their drilling targets. These large operators “have a greater need for sustained investment through the downturn versus short-cycle, mostly held-by-production Eagle Ford assets,” Singer said.

“In our view, this dynamic along with the rising focus on balance sheets and leverage reduction has exaggerated the rollover in industry Eagle Ford production rather than inferior play economics.” Producer commentary about decelerating activity in Eagle Ford “has been coupled with conversation” about ramping up production if oil prices were to eclipse $50/bbl.

“While we have seen a sequential rollover in production potentially lingering as prices remain depressed, we still believe the Eagle Ford Shale is one of the few economically sound shale plays in North America, despite a depressed commodity environment and should provide some of the best returns in the event of a commodity price rebound.”

The IHS database generally incorporates state-level data, and in some states, revisions are significant, particularly in Texas. Because of expected revisions, Goldman did not use data for wells drilled past September 2015.

“Even with the wells we are using, we see potential for (usually upward) revisions,” Singer said. “In Texas specifically, state well data is at the lease level.”

In the Permian, for instance, some horizontals are drilled on leases that also contain output from legacy verticals. And in other areas, where there are multiple zones prospective for horizontals, the framework may not remove from secular drivers the more “cyclical/price-driven shifts to oilier zones from gassier zones.” The costs to drill horizontals also were not part of the analysis because well costs differ by company and by play.

Additional detail about the onshore unconventional plays is included in NGI‘s North American Shale & Resource Plays Factbook, which delineates, for instance, the Permian’s sub-basins and provides an overview of the major players.