FERC staff has issued an overall favorable draft environmental impact statement (DEIS) for a pipeline and related equipment to supply feedstock to one of Venture Global LNG Inc.’s planned liquefied natural gas (LNG) projects in Louisiana, though there was no conclusion regarding the impact on climate change. 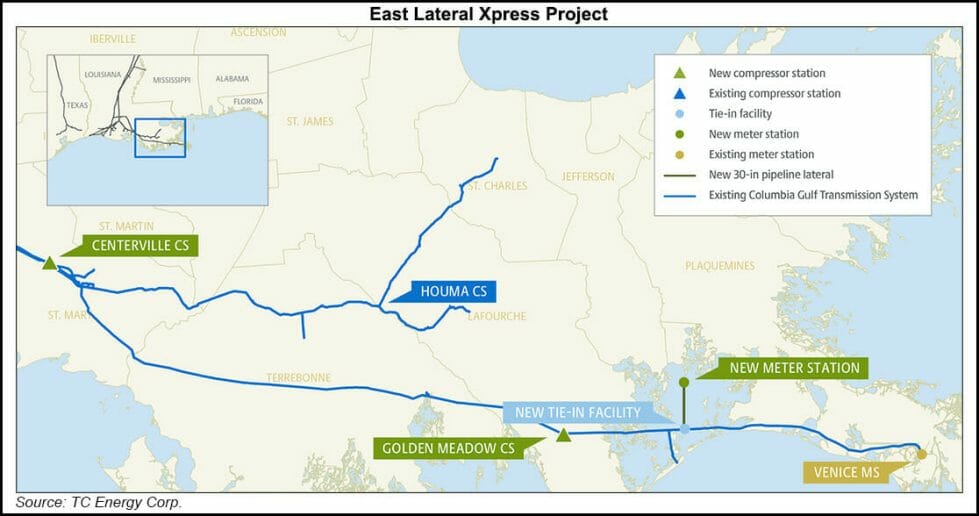 The project includes an 8.1-mile, 30-inch diameter pipeline in Barataria Bay in Jefferson and Plaquemines parishes, as well as two new compressor stations, a meter station, and a tie-in facility. It would provide another 183,000 Dth/d of transportation capacity on Columbia Gulf’s East Lateral pipeline system. Columbia Gulf is a subsidiary of Canadian midstream giant TC Energy Corp.

That would bring a total of 725 MMcf/d of firm transportation capacity to an interconnection with the Venture Global-operated Gator Express pipeline for ultimate delivery as feed gas for the proposed Plaquemines LNG terminal. Pipeline start-up is scheduled for 2023, according to the DEIS.

FERC based its determination that the project would have little environmental impact in part on the assumption Columbia Gulf would implement more than 15 recommended mitigation measures. Those measures include reducing noise during construction, meeting state water quality standards, and showing “satisfactory” restoration and rehabilitation of the pipeline right-of-way and other areas affected by construction. Staff recommended the measures be attached as conditions to the project’s authorization.

FERC staff said it was unable to determine the East Lateral pipeline’s impact on climate change because there was no methodology that could calculate the “discrete, quantifiable, physical effects” on the environment from GHG emissions associated with the project.

However, the staff was able to calculate the carbon dioxide equivalent (CO2e) emissions associated with the pipeline’s construction and operation, as well as downstream. According to the FERC analysis, construction would result in 58,293 tons/year (ty) of CO2e emissions. Construction is expected to take 11 months.

Meanwhile, operation of the pipeline would result in an annual increase in CO2e emissions of about 182,796 ty, according to the DEIS. The estimates for operational emissions are based on 100% utilization and assume the facilities are running at maximum capacity for 365 days/year, 24 hours/day. The estimate also includes blowdowns and fugitive emissions from compressor station equipment and piping, as well as fugitive emissions from the pipeline lateral, meter station, tie-in facility, valves and ancillary facilities.

Downstream, combustion of the incremental 183,000 Dth/d associated with the East Lateral would result in 3.5 million metric ty (mmty) of CO2e emissions, according to the staff estimates.

“The construction and operation of the project would increase the atmospheric concentration of GHGs, in combination with past and future emissions from all other sources globally and would contribute incrementally to future climate change impacts,” according to the DEIS.

The facility, proposed for Plaquemines Parish, would have an export capacity of 20 mmty. The project has already received FERC approval and export authorization from the Department of Energy. A final investment decision is expected this year.

Venture Global is also developing the 20 mmty Delta LNG facility, which would be sited in Louisiana next to the Plaquemines plant.

Meanwhile, Venture Global’s 10 mmty Calcasieu Pass export project is under construction south of Lake Charles, LA. The company has indicated that it is considering developing a fourth export terminal near Calcasieu Pass.

Emissions associated with LNG exports are coming under greater scrutiny from green groups, regulators and customers as more nations pledge to lower their carbon profiles. Suppliers have followed suit, and last month Venture Global unveiled plans to capture and sequester 1 mmty of carbon emissions from the Calcasieu Pass and Plaquemines LNG facilities.