Consol Energy Inc. and Noble Energy Inc. have filed paperwork with federal regulators for an initial public offering (IPO) in a master limited partnership (MLP) that will provide midstream services for the companies’ joint operations in the Marcellus Shale. 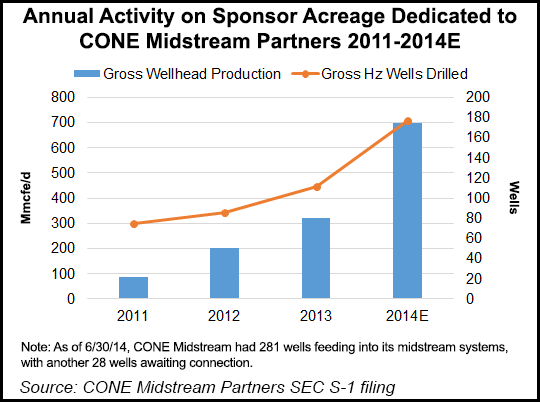 On Monday, a Form S-1 registration statement was filed with the U.S. Securities and Exchange Commission (SEC) to create Cone Midstream Partners LP [File No. 333-198352]. Although the number of common units to be offered and the price range for the offering have not been determined, the companies expect to complete the offering in late 3Q2014 or early 4Q2014.

“Our sponsors have achieved substantial production growth on our dedicated acreage since the formation of their upstream joint venture [JV] in September 2011 and have invested over $458 million in our midstream infrastructure over the same period,” Cone said in the filing, adding that Consol and Noble “believe that their existing contractual commitments for Marcellus Shale processing capacity help minimize disruptions to their drilling and development plan that might otherwise exist as a result of insufficient outlets for growing production.”

Another six miles of pipeline were classified as additional systems. As of June 30, this class had 8 billion Btu/d of average daily throughput in 1H2014 and 200 billion Btu/d of maximum interconnect capacity.

Cone said Consol and Noble’s combined daily gross wellhead production for 1H2014 averaged approximately 520 MMcfe/d on their JV acreage, equating to approximately a 100% compound annual growth rate since Jan. 1, 2011, before the upstream venture was formed. Cone added the JV acreage holds more than 5,700 potential drilling locations, based on 86-acre spacing, with about 38% in wet gas locations.

According to Cone, Consol and Noble were operating 10 drilling rigs on its JV acreage, and had drilled 358 gross horizontal wells since Jan. 1, 2011. The companies also hold long-term contracts for an aggregate of approximately 700 MMcf/d of gas processing capacity in the Marcellus, “and have secured significant long-haul firm transportation capacity or firm sales commitments for their Marcellus Shale production.”

Cone has applied for the symbol “CNNX” for the trading of its common units on the New York Stock Exchange. Pittsburgh-based Consol said Wells Fargo Securities, BofA Merrill Lynch and Baird will act as book running managers of the offering.