Plains All American Pipeline LP plans to spend about half a billion dollars on multiple pipeline projects to expand Permian Basin crude oil capacity over the next few years, the partnership said. 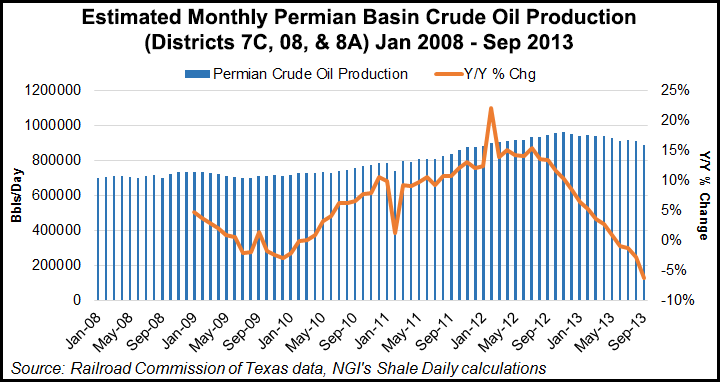 Four projects planned as well as several others “under review” are expected to cost $400-500 million. The four planned projects are expected to be completed in stages throughout 2014 and early 2015 and include the construction of three new large-diameter trunk line pipelines that will increase the partnership’s takeaway capacity in support of crude oil production growth in the Delaware and South Midland basins and will support gathering systems Plains is constructing in the Avalon, Bone Spring and South Spraberry developments.

The first project consists of adding pumping capacity to the partnership’s existing 20-inch Basin pipeline from Jal, NM, to Wink, TX, in Winkler County, increasing the pipeline’s capacity by 100,000 b/d to 240,000 b/d, and constructing a 40-mile, 12-inch diameter pipeline with 100,000 b/d of capacity from Monahans to Crane, TX, to supply volumes to the Longhorn pipeline as well as the partnership’s Cactus pipeline at McCamey, TX.

The second project includes constructing a 62-mile, 16- and 20-inch diameter pipeline with 200,000 b/d of takeaway capacity from the South Midland Basin in Central Reagan and Central Upton counties to the origin of the Cactus pipeline at McCamey.

The third project involves constructing an 80-mile, 20-inch diameter pipeline between Midland and Colorado City, TX, to provide an additional 250,000 b/d of capacity to supply connecting carriers at Colorado City, including the new BridgeTex Pipeline.

The fourth project reflects the partnership’s expectation, based on shipper demand, to increase the capacity of its Cactus pipeline project from 200,000 to 250,000 b/d through the addition of pumping capacity.

Based on recent Raymond James & Associates Inc. forecasts, Permian crude output has increased to 1.5 million b/d from 400,000 b/d at the beginning of 2012, mostly because of horizontal drilling techniques. A lack of enough takeaway capacity resulted in considerable volatility in regional crude prices lately, namely the Midland-Cushing differential, the firm said in a recent note (see Shale Daily, Dec. 2).

The 700,000 b/d of new pipeline capacity proposed by Plains represents a major step up from current activity in the region. According to statistics from the Railroad Commission of Texas, crude oil production in the Permian averaged a little more than 884,000 b/d in September 2013. Moreover, monthly production in the basin has been declining since reaching a peak of 951,000 b/d in December 2012.

This project will extend Plains’ pipeline infrastructure into Logan County, OK, and farther into Grant County, OK, and will deliver crude oil to its terminal in Cushing, OK. The project includes the construction of 150,000 barrels of tankage along the system and is supported by a long-term acreage dedication and a storage lease at the Cushing terminal from an area producer.