Affiliates of Houston-based Plains All American Pipeline LP have launched open seasons for two projects that could increase crude shipping capacity from Canada and the Rockies to the Gulf Coast. The proposals are set against the backdrop of a faltering Keystone XL buildout. 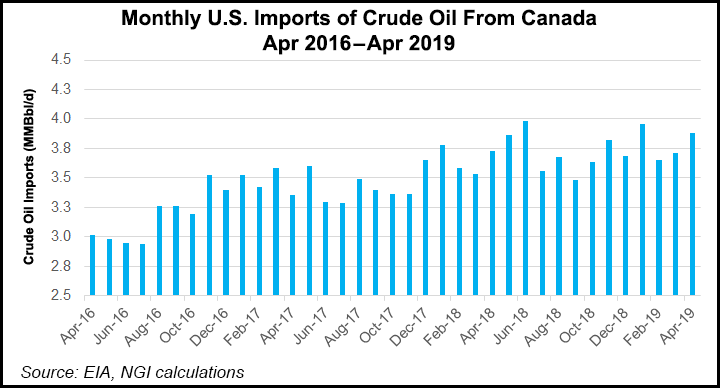 Plains is proposing to expand its Western Canadian Corridor Pipeline system, which currently consists of more than 1,000 miles of pipeline that extends from Cutbank, MT, near the U.S.-Canadian border to Guernsey, WY. From there, various interconnections with third-party pipelines can ferry the crude to the Gulf Coast.

The open season is for an additional 70,000 b/d of capacity involving long-term shipping commitments of light crude from Montana to the Gulf Coast. With sufficient commitments, the expansion could be in service in the second quarter of 2021, the company said.

Canadian crude pricing has been under increasing pressure for the past few years, which makes it particularly attractive to refineries throughout the United States, but on the Gulf Coast in particular. The lack of shipping infrastructure has choked supply, which has intermittently caused wide differentials between Canadian crude and West Texas Intermediate (WTI) crude. Increased pipeline capacity could tighten the spread between Canadian and Texan crude oil, which may not be a welcome development from refiners, but it would be a welcomed development for Canadian producers, said analyst Erika Coombs of BTU Analytics LLC.

Environmental groups filed a lawsuit to block the pipeline in early July against the U.S. Army Corp of Engineers, alleging it improperly issued a Nationwide Permit 12 under the Clean Water Act. The plaintiffs include Northern Plains Resource Council, Bold Alliance, Natural Resources Defense Council, Sierra Club, Center for Biological Diversity and Friends of the Earth.

The lawsuit was filed in the U.S. District Court for Montana with Judge Brian Morris, who ordered all work to stop on Keystone last November.

President Trump then issued a presidential permit in March, which the U.S. Court of Appeals for the Ninth Circuit ruled had rendered Morris’ injunction moot. The ruling came through too late for construction to start this year, however.

The continuous hold-ups are spurring other midstream companies to come up with alternative solutions. The Plains projects could offer much-needed relief and tighten up the differentials as early as 2020, boosting prices by $3-5/bbl, Coombs said, with the caveat that the boost won’t last long.

“This uplift is expected to be short-lived as production rapidly fills this new capacity and diffs widen again. Canada needs a large scale pipeline like TransMountain or Keystone XL or several smaller projects to relieve [price pressure],” Coombs said.

Last fall, a rail shortage drove Canadian crude prices down even more, expanding discounts to WTI to between $35/bbl and $40/bbl. Current pipeline and rail economics peg shipping costs for a single barrel at around $20, Coombs added. Increased pipeline capacity could lower that figure.

So impactful is the crude bottleneck in Alberta on prices that the provincial government mandated production caps effective in January. Most recently, the Albertan government raised production limits to 3.74 million b/d for the month of August, up from 3.7 million b/d in July. The curtailments are intended to last through the year, but increased takeaway could bring industry and government back to the table to renegotiate production limits.

The Plains projects could serve as such developments. The proposed expansions also follow a broader trend of infrastructure buildout within the U.S. to move increasing amounts of Rockies and Bakken crude south.

The Hiland Crude LLC unit of Kinder Morgan Inc. (KMI) and a subsidiary of Tallgrass Energy LP (TGE) launched a joint binding tariff open season through July 28 to test support for crude transportation service from Bakken Shale origin points to delivery points along the Pony Express system and to the Cushing Hub.

The joint open season was part of an agreement reached by the two companies in January of this year to expand crude takeaway capacity from the Powder River and Denver-Julesburg basins.