Plains All American Pipeline LP (PAA) is paying $1.215 billion for a crude oil gathering system in the Permian Basin’s Northern Delaware sub-basin that serves “several producers” in the hot play. 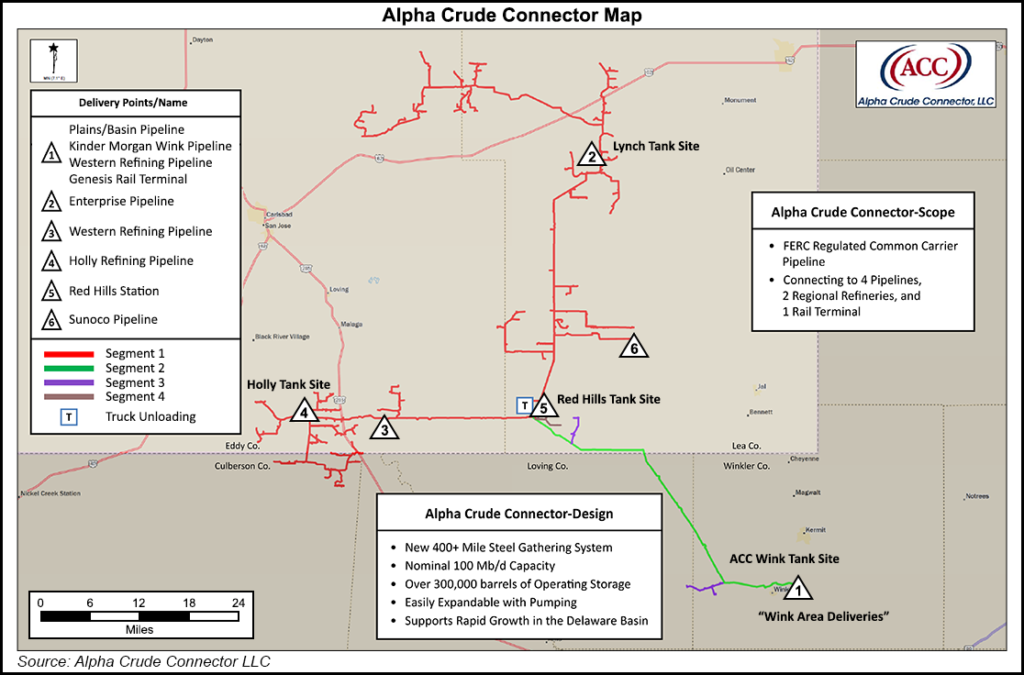 “The Permian Basin is a world-class resource play and we are pleased to announce this strategic acquisition, which complements our existing assets that provide transportation and related services throughout the Permian Basin,” said PAA CEO Greg Armstrong. “The Northern Delaware Basin is an area that is experiencing increased activity levels and significant industry investment.

“We expect aggregate crude oil production on the dedicated acreage to double over the next two to three years, and we believe that overall Permian Basin crude oil volumes have the potential to grow as much as 50% or more during this same time period.”

Armstrong said the system and planned enhancements would provide additional flexibility and a greater range of options for area producers, including connectivity to PAA’s pipelines with access to markets in Cushing, Houston and Corpus Christi, TX.

ACC is a recently constructed system in Lea and Eddy counties, NM, that also extends into Loving, Winkler and Culberson counties, TX. It is supported by acreage dedications covering 315,000 gross acres, the majority of which have 10-year terms. This includes a “significant” acreage dedication from Concho, one of the largest Permian producers. In addition, a large area of mutual interest agreement with Concho spans the area immediately around the gathering system, PAA said.

The system is composed of 515 miles of gathering and transmission lines and five market interconnects, including PAA’s Basin Pipeline system at Wink. PAA intends to make three additional interconnects to its existing Northern Delaware Basin system as well as additional enhancements to increase capacity to 350,000 b/d, depending upon the level of volume at each delivery point.

The ACC system was placed in initial service in late 2015 with multiple new well connections made throughout 2016. Fourth quarter gathering volumes averaged 70,000 b/d, and shipper nominations for January totaled about 85,000 b/d, PAA said.

“Our investment in ACC was intended to serve two primary objectives within our core upstream business: provide pipeline infrastructure to support our rapid crude oil growth in the Northern Delaware Basin and improve wellhead economics through better price realizations,” said Concho CEO Tim Leach. “With both of these objectives secured for the long term, plus the ongoing flexibility to access multiple key markets, we have accomplished our goal of developing a premier midstream solution.

“This sale not only represents an exceptional return on investment for our shareholders, but also reflects the quality of the substantial resource potential across the Northern Delaware Basin.”