North America’s largest power grid and its stakeholders need to ensure “adequate” electricity supply from thermal power plants, which include natural gas- and coal-fired units, until a substitute is deployed at scale, according to initial results of a study by grid operator PJM Interconnection. 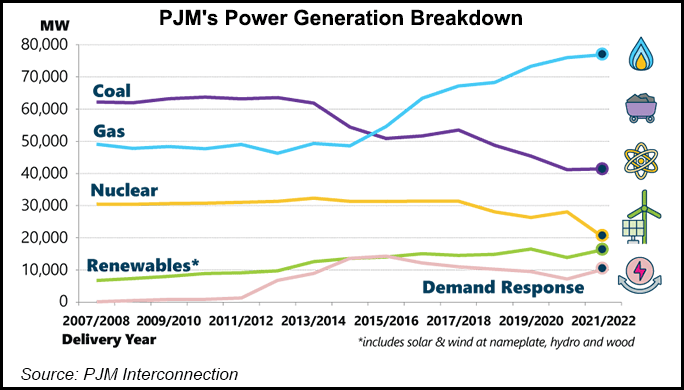 “As the generation mix continues to rapidly evolve in PJM, we must be ready to maintain the reliable, cost-effective delivery of electricity at all times,” said CEO Manu Asthana.

PJM, which serves 65 million people across 13 states and the District of Columbia, said it must work with stakeholders to “ensure that the market structure provides the right incentives to maintain…reliability services” from thermal power generators.

The conclusion represents one initial finding from the “Energy Transition in PJM: Frameworks for Analysis” paper. PJM said the paper reflects its “five-year strategy…built on three pillars – enabling state and federal decarbonization policies, planning for the grid of the future, and fostering innovation.”

According to PJM, the grid operator is engaged in a “multiphase, multiyear effort to study the potential impacts of an evolving resource mix, including the acceleration of renewable resources.”

PJM “synthesized the diverse set of state policies within its footprint into three scenarios.” The three scenarios assume varying degrees of annual increases in energy served by renewable generation: 10%, 22% and 50%. The grid operator pointed out the scenarios reveal up to 70% carbon-free generation when combined with nuclear generation.

“Currently, renewables represent approximately 6% of the annual energy, a total of over 40% carbon-free when combined with nuclear’s contribution to the energy mix in 2020,” PJM stated.

In addition to underscoring the need for a market structure that supports ongoing thermal generation reliability, the study highlighted four other “key focus areas for PJM’s stakeholder community” to examine in future study phases, PJM said.

“This study represents an important step in understanding how PJM can best work to facilitate the energy transition and make the grid of the future possible,” said Asthana.