PJM Interconnection has filed a revamped proposal with FERC that aims to better accommodate state subsidies for nuclear and renewable power, while also mitigating their effects on wholesale electricity markets. 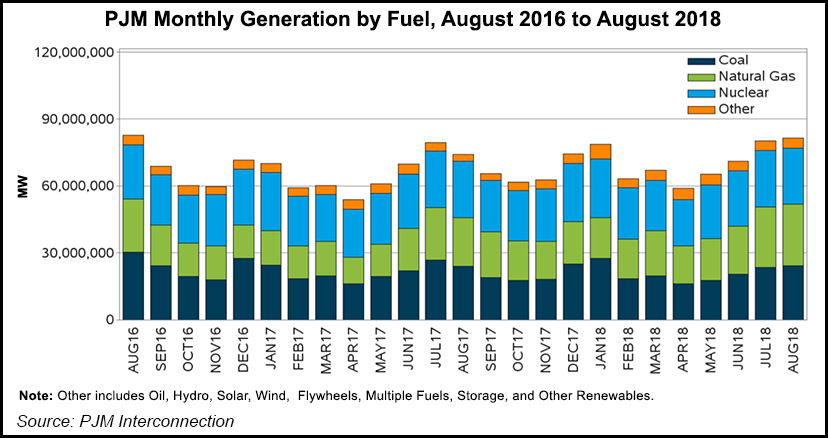 The filing was made in response to a landmark order issued by the Federal Energy Regulatory Commission in June that rejected earlier proposals and directed PJM, the nation’s largest grid operator, to rewrite its capacity market rules to address the subsidies. Fossil fuel generators have argued that the state programs allow nuclear and renewable generators to bid below costs during capacity auctions, which suppresses energy prices and undermines the competitive power markets.

While FERC has noted that PJM’s existing market rules don’t fairly account for the effect of subsidies, like those providing zero emission credits (ZEC) to nuclear generators, the Commission acknowledged that such programs threaten competitive markets. PJM recognized in its latest proposal that states have a right to support generation that meets specific environmental, economic or political goals.

“Developed with stakeholder input, the plan strikes a reasonable balance of providing flexible options to companies that are entitled to subsidies defined as ”actionable’ in the proposal while insulating the broader regional markets from any material financial impact from those actions,” wrote PJM Senior Vice President Vince Duane in a blog post. He oversees law, compliance and external relations.

PJM’s latest proposal would still employ a stringent Minimum Offer Price Rule (MOPR), or a floor price for its capacity auction that would prevent generators from artificially depressing the clearing price. Low clearing prices that are not a result of market forces alone, PJM said, would discourage innovation and investment in new, more efficient generation, which Duane said is “one of the most important and effective functions of the competitive electricity markets.”

Under an optional “resource carve-out,” subsidized resources could avoid the MOPR by obtaining a capacity commitment without having to bid in the capacity auction. Under another option, called the “extended resource carve-out,” PJM could raise prices for the unsubsidized resources remaining in the capacity market. This would level the playing field and prevent them from being “crowded-out” by the artificially low prices of nuclear and renewable facilities.

PJM’s proposal comes as four courts in Illinois and New York have upheld subsidies for nuclear power plants. Last month, federal appeals courts affirmed rulings that upheld ZEC programs adopted in 2016 to prop-up five nuclear facilities owned by Exelon Corp. in Illinois and New York. The courts found that challenges brought by the Electric Power Suppliers Association (EPSA) and several others failed to show how the subsidies are preempted by federal law or how they depress energy prices and put gas-fired facilities at a competitive disadvantage.

Representatives of the natural gas interests battling the subsidies are now looking to FERC for a prescription to counter the state programs and their effects on wholesale electricity markets.

Predictability, the EPSA and other fossil-fuel generators in filings that flooded the PJM docket on Tuesday pushed for a strong price floor that prevents generators from artificially depressing auction clearing prices. The EPSA, which mainly represents independent gas-fired generators, has also argued that allowing subsidized resources to opt-out of the auctions could erode the competitive market. It has filed for a rehearing in the Illinois case and has not ruled out filing a petition with the U.S. Supreme Court.

Competition in the power markets has intensified with an increasingly diversified resource mix. In recent years, renewable sources have become more competitive and an abundance of low-cost natural gas has caused electricity prices to plummet, undermining coal and nuclear plants in the process.

As a result, states have enacted subsidy programs to support nuclear facilities, valuing the resilient baseload power they provide and their zero-smog qualities. Complicating matters, the Trump administration continues to consider a broader bail-out for uneconomic coal and nuclear plants.

PJM serves 65 million people in all or parts of 13 states and the District of Columbia. Its footprint includes Illinois and shale-rich Ohio, Pennsylvania and West Virginia, where gas-fired power plants are proliferating. There are 25 gas-fired facilities under construction or being upgrades in PJM, according to its services queue. Even more solar and wind projects are in the works.

There are no nuclear projects. In fact, the average age of U.S. commercial reactors is about 37 years, according to the Energy Information Administration. Other states such as Connecticut and New Jersey recently passed nuclear subsidy programs and debates have unfolded for similar programs in places like Ohio and Pennsylvania.

Reply filings in the PJM proceeding are due by Nov. 6. FERC is expected to rule on PJM’s proposal by January, a deadline it would need to meet in order for the annual capacity auction to take place in August, EPSA CEO John Shelk said in an interview last week with NGI. The auction has already been delayed from May to give FERC more time to approve new rules and for PJM to implement them.