PJM Interconnection released the results Tuesday of its capacity auction for the 2020-2021 period, with natural gas combined-cycle plants accounting for most of the new generation cleared at 2,350 MW. 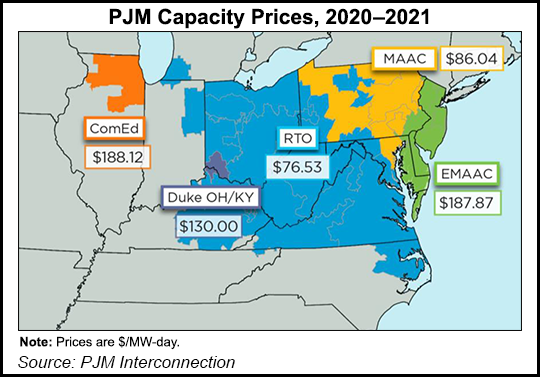 The results come as analysts are predicting tight margins ahead for the region’s merchant generators. PJM’s proximity to cheap Marcellus and Utica shale gas is driving what Moody’s Investors Service has called a “rush to build new gas plants” leading to “a power supply glut.”

PJM, which operates the grid for all or parts of 13 states primarily in the Mid-Atlantic, said the auction produced a price of $76.53/MW-day for most of the region, with higher prices in certain areas because of transmission constraints or retiring generation.

“The results show that PJM markets continue to achieve what they were originally intended to accomplish, ensuring reliability at the lowest reasonable cost,” PJM CEO Andrew Ott said. “Overall response to this auction, both in participation and competitive bids, reflects the market’s ability to attract efficient, high performing and competitive resources that support reliability.”

The latest PJM capacity auction marks the first in which stricter reliability standards were implemented that require generators to commit “to perform when needed or face steep nonperformance payments.”

A construction boom for gas-fired power plants has been underway in PJM as generators take advantage of a surplus of gas flowing from the underlying Marcellus and Utica shales. NGI explored this topic recently in its “Super Power” webinar (replay available), which included insights from PJM Vice President of Operations Michael Bryson. NGI’s special report Pipelines & Power: How New Infrastructure Could Uncork The Marcellus-Utica NatGas Bottleneck has also looked at the growth in gas-fired generation driven by the supply coming out of the Appalachian Basin.

While PJM itself has said it sees no problem with its growing reliance on gas-fired generation, at least from a reliability perspective, Moody’s has warned of the potential financial strain on merchant generators as gas-fired combined cycle plants add new on-peak power production “amid little prospect of growth in demand.”

“Over the past few years PJM has also repeatedly cut its forecasts, and the grid operator currently projects weather-adjusted peak demand growth of only 0.2%/year over the next 10 years,” the ratings agency wrote.

The growth in gas-fired generation may drive down power prices to a level that makes coal-fired capacity uneconomic, Moody’s said. The credit ratings agencyis forecasting that starting in 2021 on-peak prices will decline 15%, or 10% on an around-the-clock basis, “based on the theory that some large merchant coal plants will have to be shuttered to make room for new gas-fired production.”

Coal plants could “fight hard against closure” by operating at a cash flow deficit to wait for other plants to close first or by cutting costs and deferring maintenance. “However, as the coal plants cut costs across the board, power prices will need to fall further to force some of them out of the market,” Moody’s said. “Conversely, the price drop may be less than the cash costs of a large coal plant if generators give up on their coal plants early as part of their broader corporate strategy.”

Regional variations also exist within PJM, Moody’s noted, such as its Illinois zone, where access to cheap Wyoming coal helps insulate coal plants from gas competition compared to areas in Ohio and Pennsylvania.