The PJM Interconnection, trending toward more natural gas-fired generation, secured 167,004 MW, about 20% more than anticipated, for the 2017-2018 delivery year at a base price that was almost double the year-ago auction. 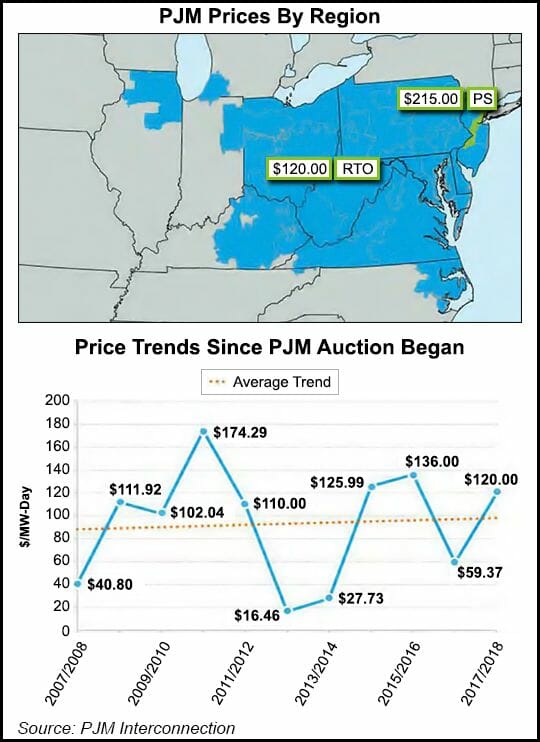 The shift to increased amounts of new gas-fired generation continued with roughly six new plants now set to come online with a total of 4,800 MW of combined-cycle gas turbine (CCGT) clearing for the first time in this auction. Almost all of the cleared new capacity is located downstream of west-to-east transmission constraints or in areas with capacity needs. About 1,100 MW of other new generating capacity was included, according to capacity report issued on Friday.

The new resources, which cover the period from June 1, 2017 to May 31, 2018, appear to indicate there will be no drastic power shortages anticipated, said PJM’s Andrew Ott, executive vice president for markets.

“Anytime you have an auction where you have competitive entry in this kind of volume, I think we are looking at a success story,” he said.

PJM holds a three-year forward capacity auction every spring to establish contracts with suppliers that commit to make their facilities available to provide electricity for the system for a year. Prices are established through competitive bidding. Almost 20,000 MW of coal-fired power generation is to be retired within the PJM system by 2016.

The capacity auction procured 10,975 MW of demand response (DR), about 1,433 MW less than a year ago. However, there was a significant shift to the types of DR that have more flexibility and contribute to reliability. There was 1,401 MW more “annual” and 4,693 MW “extended summer” DR clearing in this auction than last year, while the amount of “summer-only” DR has declined by 7,527MW since last year.

The shift provides more year-round flexibility in drawing on DR when needed. PJM experienced the need for flexible DR response during recent extreme weather, both in September 2013 and in January 2014.

The auction “continues an overall trend toward more gas-fired generation and increasing diversity of resources,” said Ott. “They also show a shift in demand resources from limited summer availability to extended and annual availability, which improves DR’s usefulness.”

The base clearing price for generation, annual DR and energy efficiency was $120.00/MW-day for all of PJM except the PSE&G location deliverability area, the only constrained area, which had a clearing price of $215. A year ago the base clearing price was $59.37. The $120 base price followed changes that the Federal Energy Regulatory Commission made at PJM’s request, Ott said. Those changes included a limit on the amount of capacity that could be bid into the auction from outside PJM and stricter rules on DR resources. The cost of complying with state environmental rules also factored into higher prices.

“Capacity prices in the western half of the market have increased to make prices more uniform across the system,” Ott said. “Frankly, this is the kind of price that sends the right signals to generators. And we’ve seen developers respond in this auction with new resources concentrated in the most capacity- and transmission-needy areas.” Energy efficiency also continues to grow in the capacity auctions. This year, a record 1,339 MW of energy efficiency was procured, an increase of 222 MW from last year. The total capacity procured in the reliability pricing model auction represents a 19.7 reserve margin.

Analysts Neel Mitra and Ryan Caylor of Tudor, Pickering, Holt & Co. Inc. wrote Monday that the six new CCGTs slated to come online over the period were a bearish signal for power prices. “Our base scenario only expected three CCGTs,” with a combined 2.6 GW of generation.

One year ago, there were nine CCGT power plants on the drawing board for Pennsylvania alone that would be able to generate up to 7,351 MW using advantaged Marcellus Shale gas (see Daily GPI, May 20, 2013). Panda Power Funds LP’s planned Liberty generating station, able to generate 829 MW with commercial operations set to begin in early 2016, broke ground earlier this month (see Daily GPI, May 16). Another recently announced plant that would use Marcellus gas is planned in Marshall County, WV (see Daily GPI, April 22).

The price of natural gas rose significantly over coal between January and March, making coal-fired units more competitive, PJM reported earlier in May (see Daily GPI, May 16). Compared with 1Q2013, coal-fired output climbed by 18.6%, with gas-fired output up 5.8%, according to the 2014 State of the Market report by PJM’s Market Monitoring Unit.