The PJM Interconnection’s annual capacity auction underway this week could result in natural gas-fired capacity exceeding 6 GW to make up for declining coal and nuclear supplies. 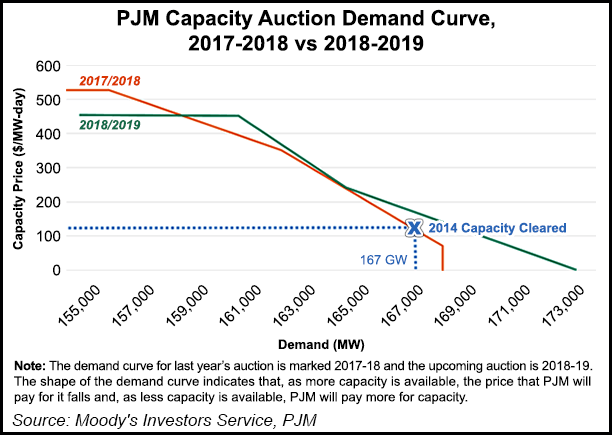 The largest U.S. power market’s grid operator supplies 61 million people in all or parts of Delaware, Illinois, Indiana, Kentucky, Maryland, Michigan, New Jersey, North Carolina, Ohio, Pennsylvania, Tennessee, Virginia, West Virginia and the District of Columbia. Results of this year’s capacity auction, set to be released on Aug. 21, would enable members to sell their generation or buy it for their customers for delivery three years in the future.

“Gas plants are more profitable in PJM, driven by low gas prices. This will likely drive substantial new supplies of gas-fired generation into PJM and largely make up for any reduction in supply from other sources.”

Moody’s estimates that new gas-fired capacity in this year’s auction will exceed the 6 GW from last year, “and we have run scenarios where it reaches 10 GW.”

For producers developing unconventional gas leaseholds in the Marcellus/Utica shales in Ohio, Pennsylvania and West Virginia, this year’s results may not impact basis differentials too much but may offer some protection down the road from volatile market prices, according to NGI‘s Patrick Rau, director of strategy and research.

If a new combined-cycle gas generator needs roughly 125 MMcf/d of natural gas, as Rau noted some sources suggest, and assuming an additional 4 GW of gas secured through the auction “comes from new plants, instead of a combination of new plants and increasing utilization at existing, perhaps less efficient plants, that would equate to roughly four times 125 MMcf/d, or 500 MMcf/d (0.5 Bcf/d), of gas burn, or 500 MMcf/d of Marcellus/Utica/etc. production that would stay in the region.”

“Moreover, there will be plenty of new takeaway capacity out of the Appalachia by the end of 2017, and especially 2018, particularly if production slows in the face of lower prices. The point is, that additional 0.5 Bcf/d probably isn’t going to impact basis differentials all that much, either in the Appalachia or nearby markets.

“What it might do, however, is offer a chance for a handful of local Appalachia producers to lock in some kind of longer-term sales arrangements with these power generators, and that in turn could offer those producers a bit of protection against volatile spot market prices in the region.”

In the 2014 auction, PJM saw a big shift to more gas-fired generation (see Daily GPI, May 27, 2014). Based on last year’s auction, about six more gas-fired plants are set to come online with a total of 4,800 MW of combined-cycle gas turbine clearing for the first time. About 1,100 MW of other types of generating capacity also is to come online.

Starting this past June, most of PJM’s power supply was from gas-fired plants for the first time ever. Among the market changes approved by the Federal Energy Regulatory Commission this past spring, this auction is set to boost reliability for weather-related emergencies and peak loads (see Daily GPI, June 11). For gas-fired generators, FERC’s OK means PJM may offer more incentives and cost recovery assurances to invest in additional pipeline capacity, which would ensure plants are able to perform when required.

PJM “has made substantial changes this year to market rules and auction mechanics in an effort to improve grid reliability,” Venkataraman noted. “We expect the changes will result in higher capacity prices, a credit positive for the merchant power industry in the region.”

The “new auction mechanics will boost capacity prices,” he said. “PJM is offering to pay more for capacity than last year, as indicated by its new demand curve for the auction. Additionally, PJM’s new capacity performance standards require higher levels of grid reliability and come with stringent penalties. In response, power suppliers will likely raise their bids, and certain power resources will scale back their participation, pushing up capacity prices.”

“If enough MWs are bid at prices covering penalty risks and operating costs, prices could rise significantly,” Venkataraman said. “The auction pits existing coal and nuclear plants with new bidding flexibility against new gas plants that have stronger energy margins. Our analysis indicates that $185/MW-day is the midpoint of the likely range of outcomes (not to be construed as our base case for rating purposes). Pricing is sensitive to small swings in capacity cleared. Some scenarios indicate lows close to $100/MW-day and highs close to the bid caps of $240/MW-day.”

The fate of many baseload plants “probably will remain uncertain, even with higher prices. The shape of the PJM demand curve dictates that a significantly higher price is possible only if fewer MWs clear than last year.”

Moody’s expects existing gas plants to be able to secure “certainty of fuel supply” in this year’s auction, with the loss of supply for most generators likely to be small.