The natural gas market firmly shifted into springtime mode, with weekly prices tumbling down as any remnants of winter demand had dissipated by midweek. Not even a host of pipeline maintenance events across the country could save prices during the short holiday week, and the NGI Weekly Spot National Avg.plunged 31.5 cents to $2.035. 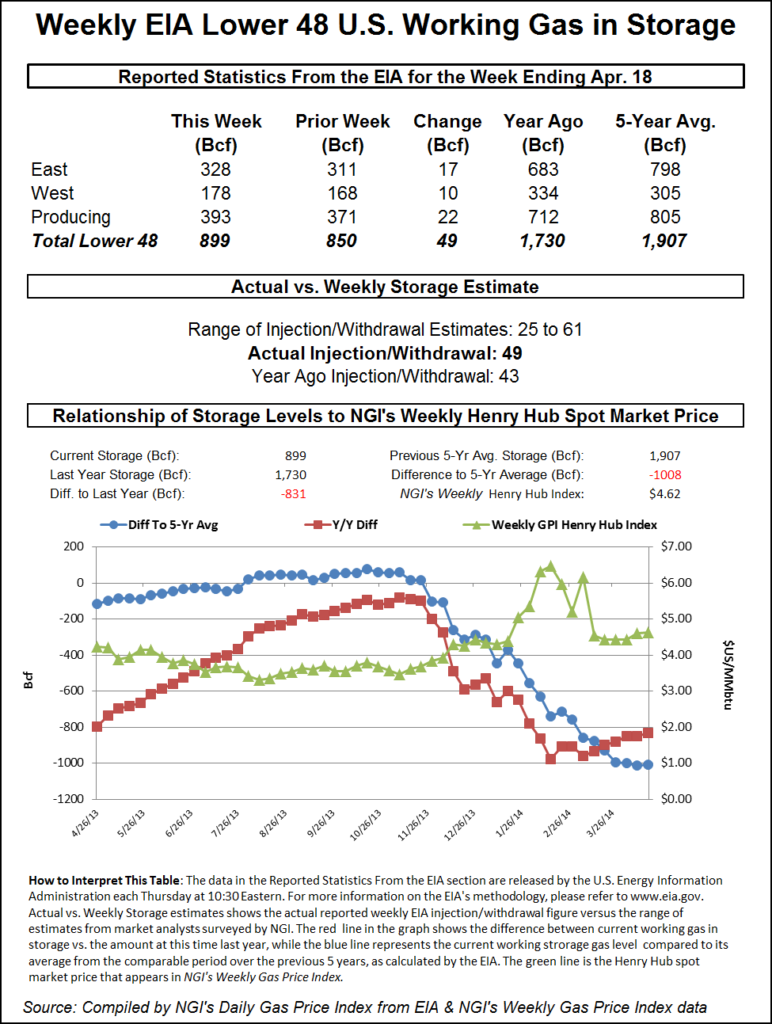 Markets out West led the way, with steep $1-plus selloffs seen across multiple pricing hubs despite some still unsettled weather in that part of the country. Cheyenne Hub in the Rockies tumbled $1.065 between April 15 and 18 to reach $1.14. Northwest S. of Green River was down $1.505 to average just 71.5 cents.

The weakness out West had been expected after a much chillier-than-expected, prolonged winter that also brought significant precipitation to the region. With healthy river levels, hydro output is likely to meet much of this summer’s demand, and prices are already taking a hit.

The Midcontinent also posted dramatic losses at a couple of market hubs as temperatures have risen to more seasonable levels. ANR SW shed nearly 75 cents to $1.39.

Appalachia prices were down anywhere from 15 cents to as much as 38.5 cents as the mild weather that moved into the region trumped any work being done on pipelines. Several Northeast pricing hubs tumbled as much as 83.5 cents on the week, although most markets were down considerably less than that. Losses in the Southeast were capped at around 20 cents.

So much for less volatility during shoulder season. May natural gas futures crashed through not one but two levels of key technical support during the short holiday week as near-record low demand combined with near-record production to send prices to their lowest in nearly three years. The May Nymex gas futures contract fell a dime from April 15-18 to reach $2.49.

Futures went into the week still relatively supported at $2.66 as some late-season weather systems swept across the United States. But those dissipated by midweek, and longer-term outlooks slashed a significant chunk of demand from forecasts. The result was a 7-cent drop at the front of the curve on Monday alone.

Bears stopped for somewhat of a breather Tuesday but still managed a modest decline even as weather models added a small portion of demand back into outlooks. But the bears’ appetite returned with a vengeance on Wednesday as warmer trends in weather data combined with expectations for a much larger-than-normal storage injection on Thursday, the first of what is expected to be a string of monster builds.

The May Nymex contract tumbled 5.5 cents to $2.517 as bears, in one fell swoop, slashed through the first key technical support level of $2.55 and the second at $2.52. The $2.55 previous support level had been tested numerous times since August 2016, but until Wednesday, had always held.

From a pure technical standpoint, given May’s slide just below $2.52, “then there is nothing to stop the continuation chart from falling toward $2.00,” NGI’s Patrick Rau, director of strategy & research, said.

Nevertheless, Rau and other analysts noted that there are a host of factors that could prevent another leg lower. For one, natural gas producers have indicated that they would rein in unhedged production activity if prices approach $2.00.

In addition, sequential production has softened a bit and liquefied natural gas exports are set to ramp up substantially in the coming months. “By midsummer, there could be an additional three trains in various stages of start-up, and demand could begin to ratchet up by another 1.5 Bcf/d-plus,” Mobius Risk Group said.

On Thursday, the Energy Information Administration reported a 92 Bcf injection into storage inventories for the week ending April 12. The reported build was within the range of expectations, but on the higher end and a few Bcf above consensus.

The 92 Bcf print compared with last year’s 34 Bcf withdrawal, and the five-year average injection of 21 Bcf.

Bespoke Weather Services, which had called for an 88 Bcf injection, said much of this week’s selloff may have been driven by the fear that the market could see its first triple-digit injection of the season already.

“This does still reflect loose balances, though not quite as loose as the last couple of weeks, and we suspect that next week’s number will be somewhat tighter also, as we find it very difficult to imagine that balances will not show meaningful tightening ultimately, given price levels sitting at multi-year lows,” Bespoke chief meteorologist Brian Lovern said. “As such, our view remains that we are near a bottom, if not have already set one, but confidence not increased until we see early next week’s data.”

The EIA data offered a few surprises despite the overall injection falling within the range of estimates. Analysts had projected a considerably larger build in the Midwest while the South Central’s build was larger than most had projected.

Broken down by region, the EIA reported a 19 Bcf injection in the East, a 14 Bcf build in the Midwest and a whopping 48 Bcf in the South Central, only 1 Bcf shy of the all-time record in that region. Salt facilities in the South Central added 21 Bcf to gas stocks, while nonsalts added 27 Bcf, according to EIA.

April heating degree days are around 40% below year-ago levels and about 13% below the five-year average, which has pushed April residential/commercial demand roughly 7.6 Bcf/d lower year/year, the firm said. Storage is currently around 25% (400 Bcf) below average and about 4% (50 Bcf) below prior-year levels.

“To reach normal storage levels of about 3.7 Tcf by the end of the summer, roughly 2.5 Tcf of additional gas will need to be injected into storage (a total of about 2.6 Tcf for the injection season). This would be near the highest recorded injection of 2.65 Tcf in the summer of 2014 when gas prices averaged near $4.20/MMBtu,” Jefferies analysts said.

The five-year average storage injection is around 2.0 Bcf, although that figure is impacted by large injections in 2014 and 2015 of 2.65 Bcf and 2.41 Bcf, respectively. Over the last three years, injections have averaged just about 1.65 Tcf, according to Jefferies.

The May Nymex contract went on to settle Thursday at $2.49, down another 2.7 cents on the day.

Spot gas prices, which traded Thursday for delivery through Monday, were a sea of red as mild conditions spread across the East Coast, sending daytime highs into the 60s to lower 80s, according to NatGasWeather. The southern United States was expected to be very warm with highs in the 70s to 90s, with the hottest conditions across Southwest deserts. The western part of the country was also forecast for mild to warm weather.

The comfortable spring setup is expected to last through the week (and likely the rest of the month), making for very light demand outside of the slightly hot southern United States, the forecaster said.

The absence of significant demand has provided the perfect backdrop for the slew of maintenance going on across the country, with the various work failing to garner much price reaction. For example, ANR Pipeline was set to conduct planned compressor maintenance this week on its Southeast Mainline.

The work was expected to limit capacity at the Brownsville Southbound throughput meter in Tennessee by up to 144 MMcf/d on gas days April 22-26, according to Genscape natural gas analyst Anthony Ferrara. Located in the Southwest Southern Segment (Zone 2), the maintenance was to be performed at the Brownsville Compressor Station, which will limit capacity at Brownsville Southbound by 230 MMcf/d, leaving 900 MMcf/d still available.

Despite the weeklong restrictions,ANR SEspot gas fell nearly a dime to $2.395.

In Appalachia, Texas Eastern Transmission (Tetco) was expected to continue maintenance on its Southern 36-inch diameter Line in M3 from Bedford, PA, to Marietta, NJ. It will perform cleaner and inline inspection tool runs from Chambersburg to Marietta Line 2 on April 22, 24 and 26, and then perform the same runs from Bedford to Chambersburg on several days through May 3.

Tetco performed maintenance on this line throughout last week. Normal capacity through the line will be impacted by around 930 MMcf/d and flows could be impacted by as much as about 690 MMcf/d compared to the previous 14-day max, specifically through Heidlersburg, according to Genscape.

“Production in the East has been impacted by maintenance throughout Tetco’s market zones, and these events should add pressure for M2/M3 spreads to widen as M2 exports to M3 demand is constrained,” Genscape analyst Josh Garcia said.

On Thursday, however, the spread remained tight at less than 2 cents, withTexas Eastern M-3, Deliveryplunging more than 20 cents to $2.06.

Tennessee Gas Pipeline (TGP) was set to continue pipeline work in northern Louisiana, although the pipeline completed pigging runs on Thursday. TGP’s work on (Caliper and MFL) at mainline valve (MLV) 834 was expected to continue April 23-25. The upcoming procedures will reduce operational capacity through the station by 72% to 196 MMcf/d, a similar impact to the pigging runs last week, according to Genscape.

Nevertheless, prices across the region fell between 5 and 10 cents.

Farther upstream in central Mississippi, TGP will also reduce capacity at MLV 847 by 63% to 237 MMcf/d from April 22-30. “While the constraints can appear significant, gas can be easily rerouted at this portion of TGP’s system. Therefore, broader regional constraints will likely not be apparent,” Eggerman said.

Indeed, prices across much of the Southeast posted significant, double-digit declines.

Additional work on the TGP system was planned in Texas, which would cut gas flows toward Mexico. From April 22 to April 25, TGP will perform emergency shutdown tests at Compressor Station 409 (Donna Line) in Hidalgo County, Texas. Operational capacity through the station will be restricted to 340 MMcf/d, restricting gas flows by about 66 MMcf/d compared to 30-day averages.

Like the rest of the country, though, spot gas dropped.